Subscribe Now Get The Financial Brand's FREE Email Newsletter
Financial institutions may not be in the business of gaming, live streaming or selling fashion accessories, but they can capitalize on some of the overall trends in consumers’ mobile habits. In many ways mobile trends increasingly point to embedded finance.

If you feel like you’re spending a lot more time on your mobile device, it’s very likely that you’re right. The average American watched 3.1 hours of TV a day in 2021 versus the 4.2 hours they spent on their mobile device, according to App Annie’s “State of Mobile 2022” report. (If you lived in Indonesia, you’d be spending 5.5 hours a day using mobile apps.)

The most downloaded app in the U.S. is TikTok, followed by Wordie! and YouTube. The only mobile finance app making it onto the top ten is Block’s Cash App. (Block was formerly known as Square.) In the finance category, the second most downloaded app after Cash App is TurboTax. Rounding out the top five is PayPal, Venmo, and Credit Karma.

The graphic below reveals the most popular finance apps by generation. A few traditional financial institutions do show up here. Kudos to Navy Federal Credit Union for being the only one making it onto the Gen Z top ten list and to Ally — an online-only bank to be sure — for sitting at the top of the Millennial list. 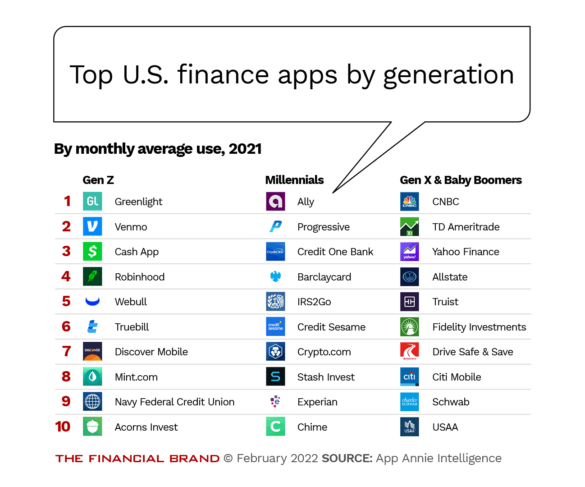 Clearly, among the two youngest adult generations, neobank and fintech mobile apps stand out overall. App Annie also ranked the top five neobanks based on monthly average use (MAU) by country and globally, as shown in the two charts below. 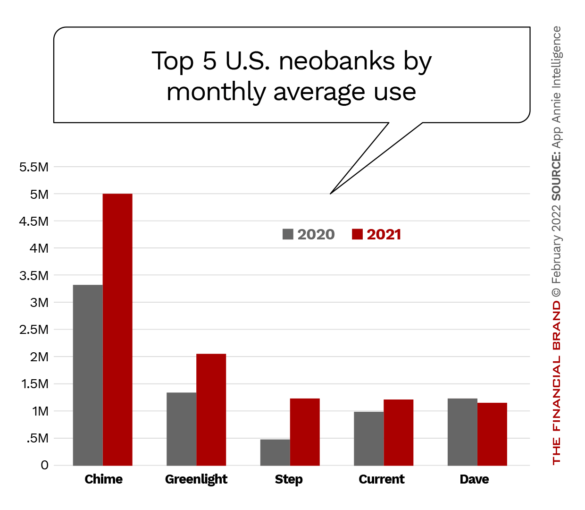 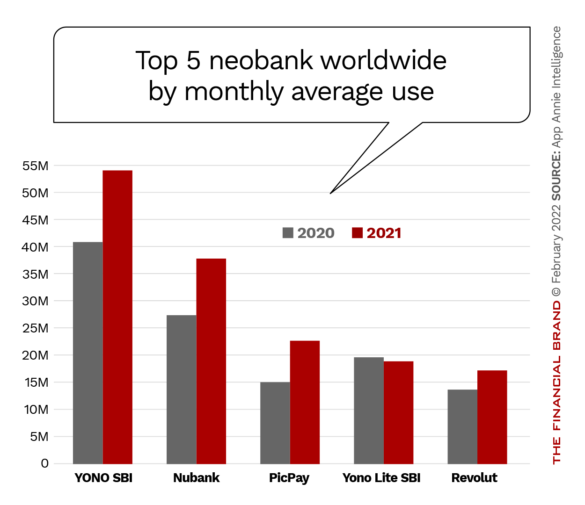 As most readers likely can attest from personal experience, consumers increasingly are streaming videos on their mobile devices. The total hours consumers worldwide spent watching video streaming apps grew 32% since the pandemic, the report states.

People are not just watching drone dancing and Squishy the chipmunk videos on TikTok; they are spending money as well. Consumer spending has grown 30% year-over-year, largely fueled by mobile gaming and in-app subscriptions, reports App Annie. In 2021, U.S. consumers spent $43 billion, $10.4 billion more than in 2020.

In Search of Amusement:

Consumers are most interested in using mobile devices for games, streaming videos and shopping. Can banking apps be made more 'entertaining'?

As Tom Brady is to football and Babe Ruth to baseball, mobile phones are the GOAT (greatest of all time) among devices consumers use, notes Theodore Krantz, CEO of App Annie, “The big screen is slowly dying as mobile continues to break records in virtually every category including time spent, downloads and revenue,” he says.

To take advantage of these overall mobile app trends and consumer behaviors, financial institutions will need to make their apps more engaging and fun. They should also explore how they can insert banking products and services into the mobile apps of non-banks at the point of sale — a practice that is part of the trend to embedded banking.

Your Brain on Banking Games

In case you hadn’t heard, consumers love gaming. In 2021, they spent $16 billion on gaming apps, according to App Annie. So, what does this increasing love affair have to do with banks and credit unions? After all, banking doesn’t lend itself to popular games like ROBLOX, Pokémon GO, Awakened or League of Legends. But financial institutions can take advantage of how the human brain works and trigger that feel-good dopamine release in banking apps.

Scientists tell us our brains include “reward pathways” that prompt us to repeat whatever it did to get a reward, whether that reward is moving up a level in a game or meeting small, daily goals. Think of the number of people you know who try to get their 10,000 steps in on their Fitbit. And by the way Fitbit is also in the banking business with Fitbit Pay.

Mobile apps that trigger a dopamine release make consumers feel good — and want to come back for more.

Another example of putting these reward pathways to work is Long Game, a gamified experience that banks and credit unions can white label with their own logo, branding, and content. Consumers log into their financial institution and play mini-games to receive rewards. These games may be casino- or lottery-style formats that reward consumers for hitting savings goals. The more consumers save, the more games and rewards they can access. 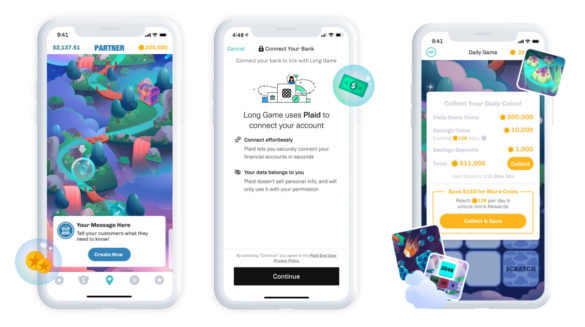 Long Game provides its partner financial institutions with reports on consumer engagement so banks and credit unions can track results.

An early example of the gamification of finance is BBVA Game, launched in 2012 by the big Spanish bank to stimulate customers to use its online services. With BBVA Game the bank created a virtual economy in which customers can win points they can redeem for music and film downloads and tickets to soccer matches.

Banks and credit unions can also find opportunities to deepen engagement and attract and retain customers by partnering with mobile shopping apps or even apps consumers use to order food and beverages at the point of sale. According to App Annie, consumers around the globe spent 100 billion hours shopping for everything from clothing to electronics, up 18% from the year before.

Consumers don’t necessarily want to have dozens of apps on their mobile devices, switching between apps to purchase different types of products. Enter the super shopping app. That may sound like a description of Amazon or Walmart, but beyond those behemoths are the increasingly popular buy now, pay later apps. BNPL pioneer Klarna now appears on a quarter million storefronts.

One App to Rule Them All:

Retailers and bankers can work together to create super apps that combine shopping and finance into a superior consumer experience.

David Sandstrom, Klarna’s Chief Marketing Officer, tells App Annie, “Consumers have shown how much they love the convenience and control of our all-in-one shopping app. From shopping inspiration and payment methods to transparent banking, budgeting features and post-purchase services, the Klarna app helps consumers to save time and money at every step of the shopping journey,” the exec states.

If current trends continue consumers will increasingly look to their mobile device as an entertainment hub and a place to do their shopping and much more. Gamification of finance and embedded finance are just two of the ways that banks and credit unions can make the most of consumers’ love affair with mobile.