Subscribe Now Get The Financial Brand's FREE Email Newsletter
Consumers continue to adopt mobile banking, but how satisfied are they and how has their behavior changed? A national study shows where banks can improve.

Mobile banking isn’t a curiosity anymore. It’s a regular part of doing business, and banks aiming to cut costs by moving customers to electronic channels are counting on it being a success. But is mobile banking living up to consumers’ expectations? And how has availability of this channel affected usage of more traditional means of banking?

The MSR Group examined these questions in our 4th quarter 2013 National Banking Study. Our research found about 38% of banking consumers report they have used a mobile device to conduct personal banking business with their primary financial institution in the past two weeks. An additional 8% say that although they haven’t used mobile banking in this timeframe, they do use the service. This total usage reflects a 21% increase over 1st quarter, showing adoption continues to grow and is nearing half of all banking consumers. We were particularly interested in how well this newer channel is meeting consumer needs. 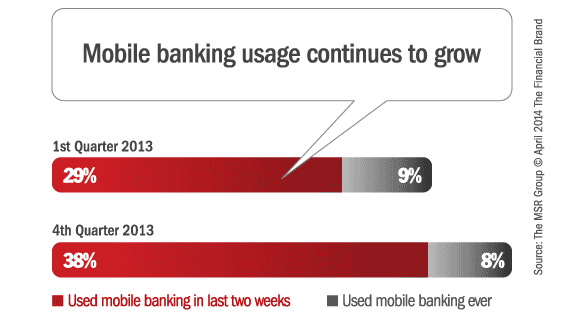 Customers have expectations for what mobile banking will do for them and up to this point, the channel has generally met them. However, there’s certainly room for improvement. About 57% of users say they are very satisfied with their bank’s mobile banking services as compared to 76% of users who are very satisfied with online banking. Another 7% of mobile users say they are dissatisfied and the rest fall in between, a significant group who have yet to be “wowed” with the technology. As the majority of mobile banking customers use the channel for relatively simple tasks such as checking balances and transferring funds between accounts, overall expectations may have been modest going in. As functionality increases, banks have an opportunity to increase customer satisfaction levels.

We did note a distinction between newer users and those who were earlier adopters. Satisfaction with mobile banking is highest among those who have been using it for more than a year, with 73% very satisfied. For those who have been using mobile banking less than a year, 51% are very satisfied. This may be the result of familiarity with a product increasing consumers’ comfort level or a reflection of differences between the two groups, which seems likely given what’s happening with usage.

Among the few consumers who do express dissatisfaction with their bank’s mobile banking service, the primary complaints have more to do with how well the app they use functions or how it’s designed rather than with the actual banking features of the app. For example, 46% say the app doesn’t always work like it should. Another 29% say the app is poorly designed and 26% say the app is slow. Banks should take heed and resolve performance issues to reduce customer frustration and prevent them from seeking alternatives—including moving accounts to competitors.

Impact on Other Channels

Mobile banking users say that since they began using this channel, they are using their bank’s branches and ATMs less often. However, more than a third of those who indicate they’re using bank branches less still report they have visited a branch in the past two weeks. While this is significantly lower than branch usage for all consumers surveyed (51%) it’s still a sizeable group who have just added another layer onto their banking options.

Really, this all comes down to what our previous research has shown: people choose the channel that allows them to meet their specific financial need as quickly and easily as possible. Sometimes that’s a 24-hour, on-the-go solution like mobile while other times it requires a full-screen view on the bank’s website or a personal, face-to-face interaction at a branch. When customers begin using new channels they may change the way they use existing channels, but they seldom replace them. In fact, the most satisfied customers have lots of options. We’ve seen this when examining NAR® (Net Advocacy Rating), The MSR Group’s metric for measuring likelihood to recommend and to do additional business with a company. Customers who use multiple banking channels have a much higher NAR® than those who use a single channel.

Read More: Trendwatch – Mobile-Centric Bank Among First in the U.S.

If you’d asked customers 10 years ago if banking via mobile device was important to them, a sizeable group would have said, “No” (or “What’s a mobile device?”) New technology takes time to reach the masses, and often the only reason consumers don’t realize they want something is because they don’t know it exists.

Right now, mobile banking is meeting the needs of customers who choose to utilize this channel. However, satisfaction is likely to stall until banks create the ability and the reason to use deeper functionality in their mobile apps. Take note, though: additional features may change the way customers use the service and their expectations will likely increase as well. Banks who are capturing customer feedback about their experience with this channel and using this to drive enhancements and service improvement will come out ahead.