Standard Chartered Bank has recruited two veteran mountaineers for an expedition to Mount Everest. The duo will test the bank’s “Breeze” mobile banking app the extreme conditions awaiting them at the peak of the world’s tallest mountain — where temperatures remain sub-zero year round, winds gust up to 100 miles per hour and three feet of snow can fall on you overnight.

Onlookers from around the world can follow the trek and root the climbers on through the bank’s various social media channels. A specially created campaign blog, an interactive map, as well as regular posts on Facebook and Twitter will bring to life the story of this epic journey.

According to Aman Narain, Standard Chartered’s head of digital banking, this unique Himalayan adventure aims to prove that banking is — quite literally — possible anywhere, anytime.

If the expedition is successful, Standard Chartered will climb into the Guinness Book of World Record for conducting the highest banking transaction at 29,029 feet (8,848 m).

The team has to accomplish their mission before June 1, when climbing permits expire and the weather becomes unmanageable.

(Update: They made it. The team successfully set records for the highest stock trade and conducted funds transfers with Breeze Banking at Everest Camp 3 at 6,500 meters, then confirmed their bank account balances at Everest Camp 4 located at 8,000 meters — 848 meters from the summit.) 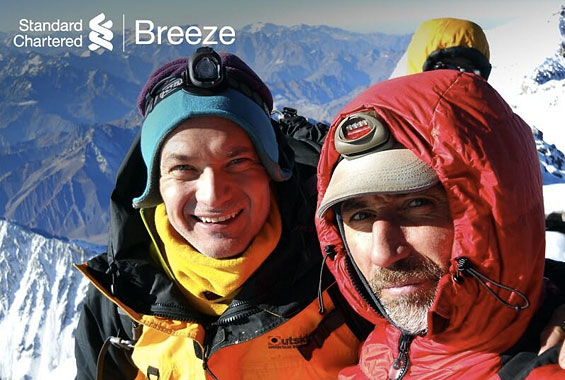 The expedition team includes six people — three sherpas and three climbers representing three countries — lead by Horacio Galanti from Canada and Horacio Cunietti from Argentina, both members of Team Extreme. Between the two of them, they have some 43 years of climbing experience and have made over 150 high altitude summits.

On their way back down the mountain, the Standard Chartered expedition will recover debris left behind by previous expeditions. The two Horacios aim to remove approximately 400 pounds of debris and about 50 oxygen cylinders.

Standard Chartered has timed the stunt to coincide with the 60th anniversary of the first ascent of Mount Everest by sherpa Tenzing Norgay and Sir Edmund Hillary on 9 May 1953.

Ashley Veasey, Standard Chartered’s CIO, said the idea for the expedition was hatched to “harness the power of mobile technology and prove that banking can be a Breeze even on the highest mountain on earth.”

In 2007, mountaineer Rod Baber set a record by making the first mobile phone call from the top of Everest. The calls were made possible when China set up a mobile base station with a line of sight to the north ridge. During that climb, Mr. Baber also claimed a separate record for sending the highest text message. Had Baber planned ahead, he probably could have gone for the mobile banking record while he was at it.

To set his telecommunications records, Baber had to tape the batteries for his Motorola handset to his body to ensure they stayed at a high enough temperature to power the phone when he finally reached the summit. Presumably, climbers in the Standard Chartered expedition will have to do the same.

Mobile banking at the top of Everest is arguably safer than making mobile calls, because climbers have to remove their oxygen masks to talk on the phone — dangerous when you are 5.5 miles high, where the thin air presents a much bigger threat than the cold. At the top of Mount Everest there is only one-third the oxygen available as there is at sea level. That’s why most climbers only stay for 15 minutes before turning around. But if you removed your gloves at the summit, it could take a couple hours before frostbite started to set in. That’s more than enough time to get all your mobile banking done.

Maybe next year they’ll try PFM on an iPad? 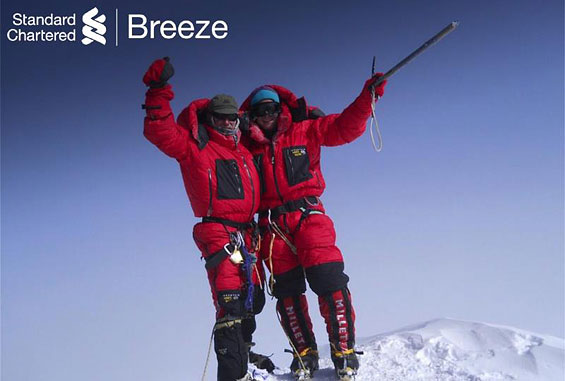 The cost of this massive undertaking aside, it’s a smart and effective way to hit on some key strategic goals for Standard Chartered. First and foremost, a stunt like this attracts attention …around the world. It’s not every day a bank sends two guys up the world’s tallest peak to test some technology, so media outlets — including The Financial Brand — gleefully eat it up. The bank is getting a mountain of free press (pun intended). More importantly, this free press is concentrated in Asian markets where Standard Chartered is based. The annual treks up Mount Everest, which is right in the bank’s backyard, are a popular topic of interest to millions living in the region.

Furthermore, Standard Chartered is sending a strategic message that’s critical to its future success: “You can use our mobile banking app anywhere.” Some guerilla stunts are little more than random gimmicks with no real relevancy to the product or service being promoted. Not this one. It’s relevant, and on message.

Standard Chartered also wants to engage consumers in social channels. Mission accomplished. In just the last few weeks, the bank has tacked on 41,000 new Facebook ‘Likes,’ a growth rate of 47%. What’s more is that they bumped their Facebook engagement rate from an unremarkable 0.97% to a much more impressive 2.3%. There are presently over 3,000 people on Facebook talking about the bank, up from 850 in early April. Meanwhile, over at Twitter, Standard Chartered added over 1,000 new followers, a growth rate of 6.1% in less than eight weeks.

Note: Someday a bank (or credit union) will pull this same kind of stunt in outer space. Who will be the first conduct a mobile banking transaction out in the final frontier?