Over 64% of US consumers say that they would never use a mobile wallet, according to recent research carried out by Consult Hyperion.

Consumers were asked who they would trust most to issue a mobile wallet: banks, phone companies, Google or major retailers or no one. The most trusted issuers were banks at 20%, followed by Google at 10%, retailers such as Walmart at 3% and phone service providers at 2%. 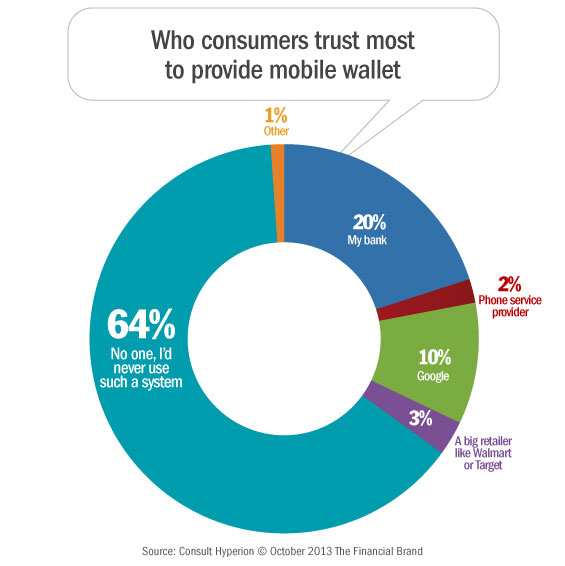 Read More: Will You Be Ready When Mobile Wallets Turn Banking Upside Down?

Age made a difference to the attitudes shown in the research, with the group most likely to use wallets overall from the sample being men aged from 25-34, where only 50% of those replying said they would never use a wallet. The group least likely to use wallets were women aged from 45-54 where 78% said they would never use a wallet. Banks were consistently the most favored issuer amongst all groups, except when broken down by salary where respondents earning between $50-74k chose Google as their preferred issuer.

Only a few of the consumers surveyed suggested other types of issuer, with credit unions, PayPal and “Santa Claus” proposed as possible alternatives.

“The study shows that issuers of mobile wallets need to do a better job conveying what mobile wallets really are and what benefits they bring,” says Dave Birch, a spokesperson for Consult Hyperion. “Despite that banks retain the most trust for such a service, it’s interesting to see that Google outranks both phone operators and major retailers as a trusted issuer.”