Subscribe Now Get The Financial Brand's FREE Email Newsletter
The introduction of many mobile wallet solutions, and increases in market awareness that mobile phones can be used as a payment device, have bolstered the potential for mWallets. Yet, when we look at the figures compared to other payment alternatives, it’s clear that mobile wallets continue to be a niche product. So what's the missing link to adoption?

New Mobile wallet technologies have made it easier than ever for consumers to make cashless purchases, and the opportunity for mobile payment solutions is growing rapidly. Smartphone growth continues unabated, with about 145 million people in the United States owning smartphones as of August 2013, translating to a 60.8 percent mobile market penetration. In addition, according to Datamonitor, one in five U.S. smartphone users — or about 29 million people — have installed a mobile wallet application. 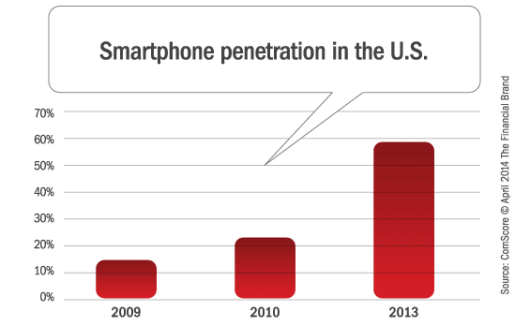 So why have U.S. mobile wallet providers lagged behind other regions of the world, unable to convince consumers to transition from traditional card-based transactions to mobile-based payments?

In a white paper entitled “What’s Missing? Creating a Comprehensive Mobile Wallet Solution,” TSYS addresses key issues that are impacting the evolution of the mobile wallet. The study also reveals consumers’ wants and needs from a mobile wallet solution perspective.

Three foundational issues were found to stand in the way of adoption of current mobile wallet solutions according to the study.

“Millions of consumers now are armed with mobile wallets, but their use of them is being held back, essentially because the wallets are no more convenient to use than credit and debit cards.”
— Chris Colson

What’s In Your Wallet?

The TSYS study found that consumers desire a comprehensive mobile wallet that provides not just payment capabilities, but also the ability to replace the physical wallet, such as digitizing their driver’s license information and other personal identification. Additionally, the study revealed that the key driver to making the wallet truly functional for consumers would be the integration of their identification.

“Consumers don’t just want payment capabilities, they also want the ability to replace the actual, physical wallet, essentially moving the wallet from the back pocket to the front pocket,” Colson said. “The biggest piece of this is the integration of their identification … most importantly, their driver’s license.” 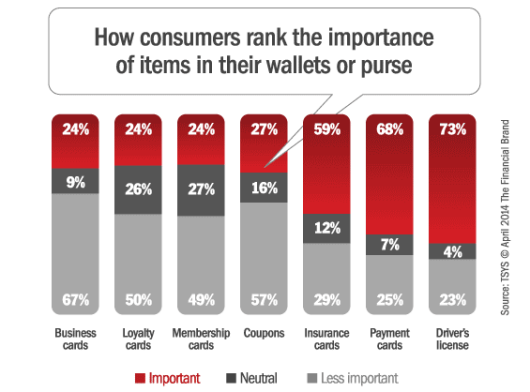 As can be seen above, The TSYS Mobile Wallet Study revealed that the most important item in a consumer’s physical wallet is their driver’s license, with 73 percent of survey respondents rating it as ‘important,’ and 53 percent ranking it as the most important item in their wallet. Interestingly, the driver’s license even ranked above payment and insurance cards. Despite this ranking, today’s mobile wallet options tend to focus on a much more narrow set of features, with some focusing on payments, others on rewards, and still others on storage of documents (tickets).

Don’t Worry About Leaving Home Without It

“47 percent of consumers would consider using a mobile wallet if all of the components of one’s current wallet were integrated.”

Consumers want a solution that includes all the primary contents of their physical wallet, including payment cards, auto and healthcare cards and especially identification cards such as the driver’s license. Furthermore, it is important that future mobile wallets offer an array of extra features and capabilities, such as comparing product prices while shopping, enabling the electronic acceptance and use of points and rewards, and the integration of real-time personal financial management (PFM). Finally, consumers want the ability to skip checkout lines (‘line busting’), where they can walk into a store, pick an order and leave. 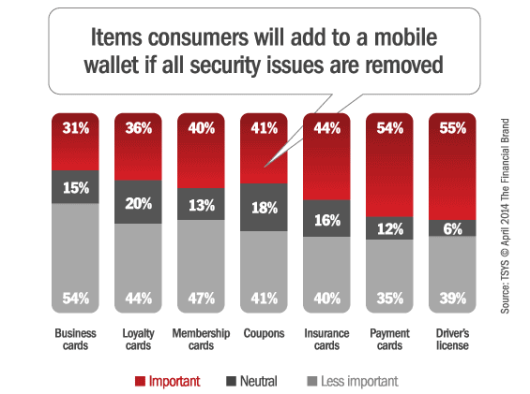 The TSYS study found that 47 percent of consumers would consider using a mobile wallet if all of the components of a physical wallet were incorporated. The percentage increased to 76 percent among respondents under age 25, and to 61 percent for those aged 25 to 44. These findings show that a ‘complete’ solution is desired and that Millennials will continue to lead the way in the growth of mobile wallets.

When asked whether they would leave their physical wallet at home for a day if all of its contents — including credit and debit cards, a driver’s license, and insurance cards — could be stored on their mobile device, 37 percent of survey respondents said they would. As expected, the responses revealed a high variance by age, with 65 percent of those under age 25 being willing to do so, compared to 54 percent of those aged 25 to 34, and 48 percent of those aged 35 to 44.

The Future of Mobile Wallets

There is still a great deal of work that must be done by financial institutions, merchants, governments and third parties to encourage consumers to replace their physical wallets with the mobile alternative. While consumers have embraced certain components of a mobile wallet (storage of loyalty cards, travel documents, etc.), there is a steep slope to climb to make mobile wallets more secure and useful. But recent trends are encouraging according to a recent interview of Chris Colson by PYMNTS.com:

One major stumbling block in the future of mobile wallets is that no process currently exists to integrate identification such as the driver’s license into the mobile phone. While the technology currently exists to integrate such identification, there is no collaboration yet between governments, mobile platform providers, mobile carriers and the financial services industry to make this happen. The study from TSYS shows that the digitization and integration of identification cards is the tipping point for mobile wallet success.

The good news is that many still believe that banks and credit unions would be the best to deliver a widely accepted mobile wallet solution. According to a Mercator focus group, “When asked which companies they would trust to deliver mobile payments in a safe and secure environment, consumers in the groups ranked financial institutions (FIs) first and card networks second.”

The question is whether the financial services industry will respond accordingly.

How To Get Your Copy of the Report

The research paper from TSYS, “What’s Missing? Creating a Comprehensive Mobile Wallet Solution,” highlights critical factors that will determine the mobile wallet’s future adoption in the U.S. market and its acceptance among merchants, as well as explores how a more robust wallet solution can solve consumers’ needs. This 10 page report is based on primary research TSYS conducted of 500 consumers in January 2014 to address some key issues that will affect the evolution of the mobile wallet and to reveal consumers’ wants and needs from a mobile wallet solution.