Subscribe Now Get The Financial Brand's FREE Email Newsletter
Millennials may be the most likely to embrace the 'next best thing' in mobile banking, but tectonic shifts in mobile banking adoption rates indicate that Boomers are the segment with the most potential for growth and profits.

Mobile technology has moved beyond the role of being a communication device, to facilitating mobile payments (mPayments), providing a gateway to the Internet-of-Things (IoT), enabling location-based advertising, and being the central point of contact for an entire ecosystem of apps, including social media and virtual reality (VR). Any view of the future of banking must include the potential of mobile.

More than 40% of individuals look at their mobile phone within 5 minutes of waking up, usually checking IM or text messages (35%) followed by email (22%). During the day, consumers access their phones approximately 47 times (82 times for 18- to 24-year-olds). Once the day is over, 35% of consumers check their devices five minutes before going to sleep, with 50% of consumers waking up in the middle of the night to check their phone. As functionality increases, these usage numbers are only going to rise. 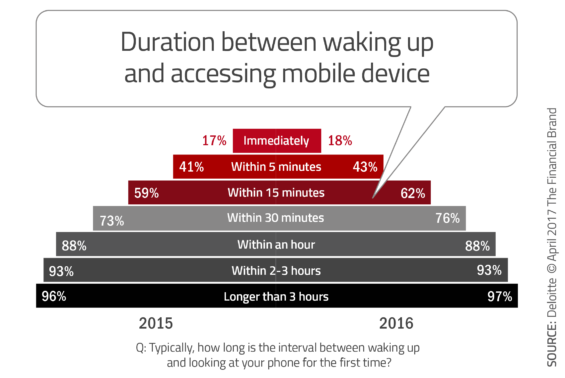 The increasing use of mobile phones has been largely driven by the expanded functionality of  the devices. Beyond using mobile for traditional calls, 45% of consumers report participating in more video calls compared to the previous year, with 44% saying they are doing more instant messaging.

Finally, the most likely to embrace new mobile technology is now the older Millennial segment, age 25-34, who have both the knowledge and money to be mobile trendsetters. This shift in the mobile technology adoption curve results in both the younger Millennials (18-24) and Gen X segment (35-44) being equally (but less) likely to embrace the ‘next best thing’ in mobile (23%).

Will the banking industry take advantage of this shift in technology adoption, or be left behind as alternative providers offer solutions that make a person’s financial life more rewarding? Is there a way for banks and credit unions to be the mobile access point for more than just financial services? Finally, will financial institutions be able to adjust their communication strategies to reflect the movement to short form messaging and desire for video content?

The 2016 Global Mobile Consumer Survey, published by Deloitte, provides a great deal of insight into a wide range of mobile topics, including smartphone usage, service preferences and attitudes toward emerging technologies.

Smartphone ownership growth has slowed down, with only a 7% increase to 77% ownership in 2016. This is the result of market saturation, even in previously underrepresented segments (55+ year olds). Despite this mobile phone ownership growth moderation, tablet penetration increased to 59% (up 8% in last year), smart watch penetration tripled over the past three years (from 4% to 12%), and fitness bands reached 17% market penetration, according to Deloitte.

While the ownership of wearables is still modest compared to smartphones, the growth does indicate a willingness for consumers to embrace an expanded communication network that could provide value to financial firms. Testing of wearable integration continues by many banks, with use cases often depending on payments integration as well as many insurtech uses. 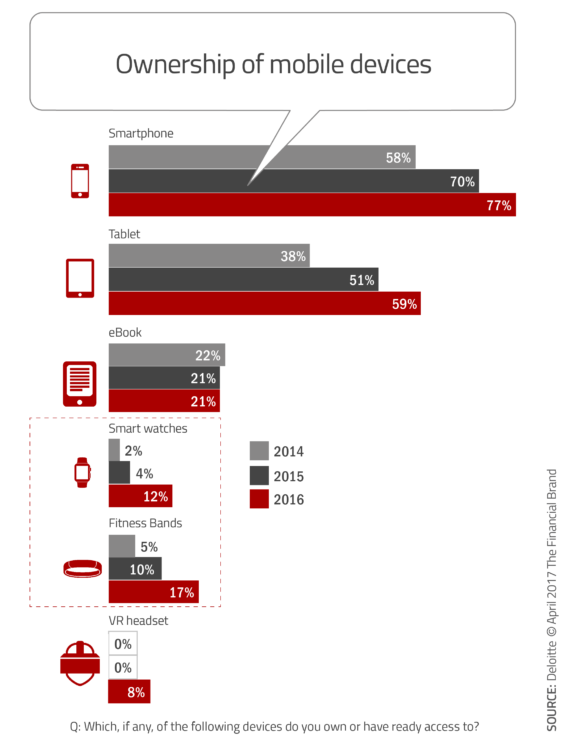 As in previous years, shopping ranked as the No. 1 activity during which consumers use their phones, with 93% indicating this form of multitasking. Tied with using a mobile phone while shopping was using a mobile device at work (also at 93%).

Mobile multitasking doesn’t end there, according to the Deloitte research. Nine out of 10 consumers also reported using their mobile devices while watching TV, talking to friends, while eating at a restaurant and even while crossing a street. In other words, almost everyone is using their mobile phones constantly for something.

When it comes to shopping with a mobile device, 58% of consumers reported that they had used their phones to browse a shopping website or app, with just under 40% saying they shopped with their phone at least once a week.

With consumers increasingly willing to connect with commercial websites using their phone, there will be increasing opportunities for businesses (including financial institutions) to monetize this connectivity. This expansion of the mobile-first consumer will also provide opportunities for social and Internet-of-Things (IoT) connectivity in the future.

The Increasing Potential of IoT

The most dramatic changes in mobile trends was seen in the Internet-of-Things (IoT) category, with the largest year-over-year increase in interest jumping 12%, from 53% to 65%. This increase was led by interest in automotive IoT (75%) and home IoT (65%).

This increase in interest in IoT was reinforced by a willingness by consumers to pay extra for home monitoring services (50%) and home control (48%), as well as a 62% willingness to consider eventually owning or riding in an autonomous car.

The good news is that concerns about security dropped significantly in 2016 (from 54% to 40%), while users saw slightly more value in mPayments (38%). In fact, for those who use mPayments, the value of using a mobile device to pay increased across the board. The top three uses included transferring money (40%), use in coffee shops (39%) and for buying fast food (39%). The highest increase in value (possibly caused by a greater participation by merchants in this category), was for purchasing groceries (15% increase Y2Y). 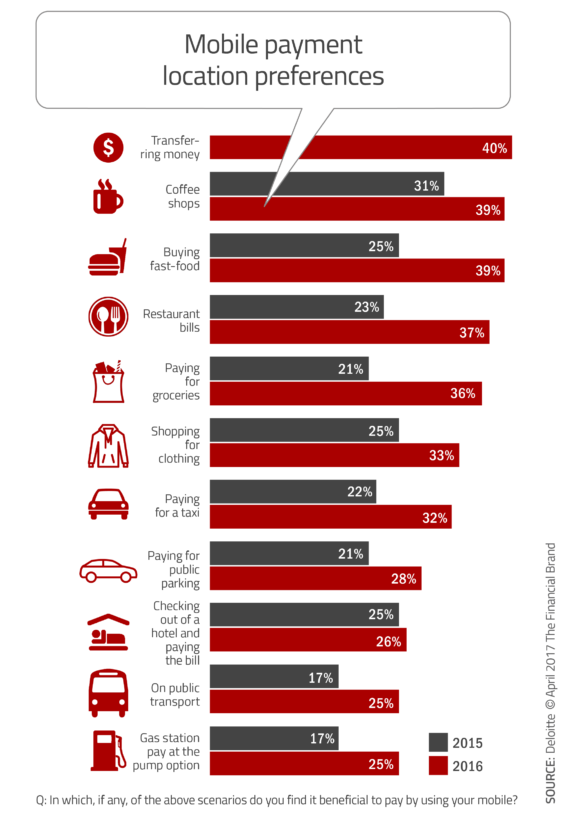 The Deloitte research found that consumers are becoming slightly more willing to share information, especially among younger consumers. That said, consumers want to be the ones to determine what information gets shared and with whom. According to the research, “More than half of consumers who say they are interested in connected devices express willingness to share usage data with companies, as long as they can choose what information to share.”

Part of this willingness to share information through connected mobile devices may be the result of increased security features being built into devices. While 63% of smartphone owners who make purchases still use a traditional password/PIN combination, 31% have used a fingerprint, 11% have used voice, and 10% have used facial recognition. Surprisingly (and a bit concerning), 24% of consumers who used their phone for purchases used no security authentication.

Probably the most important finding in the Deloitte study for the banking industry is that the most likely segment to embrace new mobile technology has shifted from the traditional 18 to 24-year-old segment to the 25 to 34 year-old segment. This shift in the technology adoption curve is important to all businesses hoping to gain traction with new features and functionality.

Instead of targeting the younger Millennial segment, new capabilities should be built around the older end of the Millennial segment. In addition, with Gen X consumers now on equal footing with younger Millennials regarding the acceptance of ‘the next best thing’ in mobile, financial organizations have less investment risk when considering the development of features and functionality, including wearables, IoT, VR, etc.

The ‘mobile native’ demographic segment (25-34) is also showing the highest usage patterns for mobile devices. This segment had the highest VoIP usage (40%) in the past year, and 21% of the 25-34 year-old segment make weekly in-store mobile payments. This is twice as high as the 18-24 segment. Amazingly, the increase in mPayment use increased by more than 50% in the past year alone. 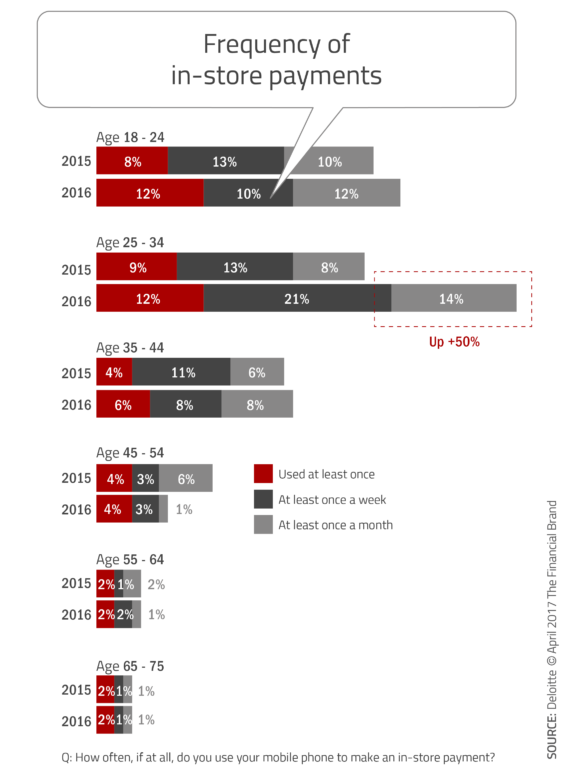 Mobile technology is no longer ‘new’, with every demographic segment becoming more familiar – and more demanding– of how mobile technologies can make everyday life easier and more rewarding. As the ‘Mobile Generation’ continues to age, needs and expectations are changing as well. It is more important than ever for the banking industry to understand the opportunities for growth in the powerful ecosystem of mobile applications and devices.