Subscribe Now Get The Financial Brand's FREE Email Newsletter
One in two Americans now turn to digital devices as their primary method of banking, according to a study from Bank of America. The report explores broad mobile trends, banking behaviors among U.S. consumers.
Subscribe Now!

People now think mobile devices are as important as using deodorant and brushing your teeth. If you took someone’s phone away, most people say they would be willing to give up sex, booze and chocolate to get it back. The inaugural Bank of America Trends in Consumer Mobility Report is a fascinating study examining a wide range mobile trends, with a specific emphasis on banking behaviors.

Mobile Phones Now as Indispensible as Deodorant and a Toothbrush

Mobile connectivity is now so critical, the smartphone falls below only the internet and personal hygiene when ranked by importance to people’s daily lives. The report  found that the Millennials ages 18-24 are most likely to view their mobile phones as very important (96%) — more so than deodorant (90%) and even their toothbrush (93%). 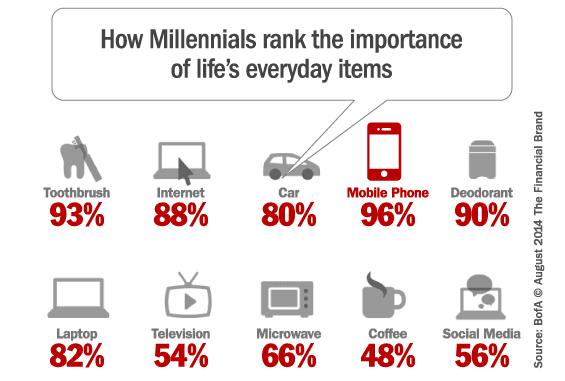 The survey found that almost one in two (47%) U.S. consumers admit they wouldn’t last a day without their smartphone. When asked what they would give up to regain access to their mobile phone, nearly four in five (79%) of respondents would be willing to give up alcohol or chocolate. 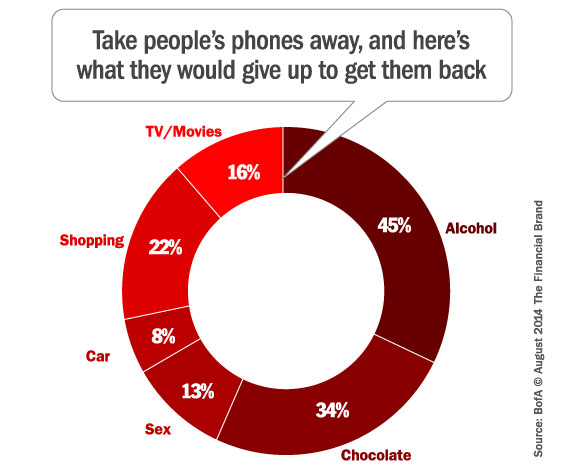 If a phone was lost or stolen, consumers say they are just as concerned about losing their database of personal contacts (79%) as they are about identity/security information (79%).

When asked about other people’s mobile habits, checking a phone while driving ranked as the most annoying offense (38%). Sharing too much personal information, either by talking too loudly in public (15%) or posting too many details on social media (15%) tied for second-most annoying mobile phone habits. Only 7% of respondents find checking a mobile phone during meal times to be most annoying.

The report revealed that almost two-thirds (62%) of consumers have at least tried mobile banking. When accessing a mobile banking app, the most common activities included monitoring account balances and statements, transferring funds and paying bills, as well as depositing checks via mobile check deposit.

Of those who use their phones for banking, almost one-third (31%) say they log on at least once a day, and four out of five (82%) access their accounts at least once a week or more.

While mobile and online banking services are becoming more widely used, and in many cases are consumers’ primary method of banking, visits to bank branches also remain high. 84% of respondents have visited a bank branch within the past six months. This is true among all the age groups polled, with nearly the same percentage of Millennials ages 18-34 (83%) saying they have visited a bank branch in the past six months as those ages 35 and older (85%).

However, just 23% of respondents say they complete the majority of their banking transactions at a branch. Nearly half (47%) turn to mobile or online as their preferred method. 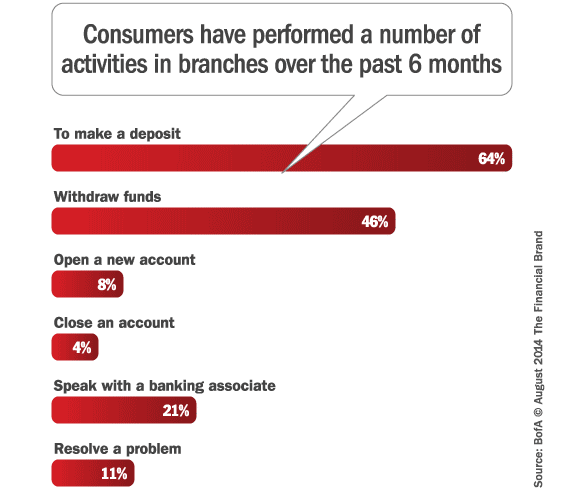 The trend is inescapable: mobile phones are the future of banking. Consumers seem ready to embrace advances in mobile tech that will improve the experience and make it more secure.

Increasingly, consumers are using their mobile banking apps to perform more sophisticated transactions, such as mobile check deposit. According to the report, nearly six in 10 (58%) of those surveyed have used mobile check deposit, and nearly four in 10 (38%) use it frequently.

Consumers who say they do not use mobile check deposit cite lack of awareness as the chief reason: more than one-third (35%) are either not as familiar as they would like to be or unsure how to use the feature. More than one in five surveyed (21%) prefer physically handing checks to a teller, and 27% report they just do not have any checks to deposit.

“Mobile check deposit has been one of the fastest growing digital services we offer,” says Marc Warshawsky, SVP/mobile solutions executive at BofA. “Bank of America customers are depositing an average of 170,000 checks via mobile devices every day.”

In the next two years, 60% of consumers would be comfortable with a fingerprint scan/swipe security feature to gain access to their mobile banking app. Nearly one-third expressed comfort with retina scans (32%) and voice recognition (33%).

BofA says it now has more than 15 million active mobile banking users. These mobile consumers access their accounts on a phone or tablet over 165 million times per month.