Gone are the days of needing to walk into a store to make a purchase. Today, shoppers only need to access their smartphones to make a purchase of anything, anywhere in the world. According to the annual Mobile Money Report released by the trade group, Mobile Ecosystem Forum, more than three-quarters of those surveyed (78%) made a purchase on their device in 2016.

Chinese consumers were the most active, with 88% of China’s citizens currently doing mobile transactions (compared to 80% in the US and only 66% in France). In addition, 38% of Chinese consumers use a mobile device to pay in-store – nearly double the global average (18%).

The strength of mobile payments in China is explained by the mature ecosystem built by Tencent/WeChat and Alipay. WeChat provides the ability to make payments inside its messaging platform. Both WeChat and Alipay provide payment at retail from a QR code, with both also allowing NFC in-store payments.

“The adoption of mobile money continues to advance,” says Rimma Perelmuter, CEO of MEF. “In developed markets, mobile payments and banking are driving a revolution in convenience. In growth markets, they are giving millions of people access to financial services for the first time.”

The Growth of Mobile Commerce

Online shopping is moving from the desktop to the smartphone. This is occurring in both developed and developing markets, where consumers can access funds for purchases and transfers using nothing more than a feature phone.

Consumers paid for physical goods more than any other type of item (36%) – a rise of a third on the number that indicated they made a mobile purchase of a physical product in 2014. Consumers who indicated they had made a payment using a mobile app more than doubled from 16% to 34% during the same period, while purchasing food and drink also more than doubled (11% in 2014 to 26% in 2016). 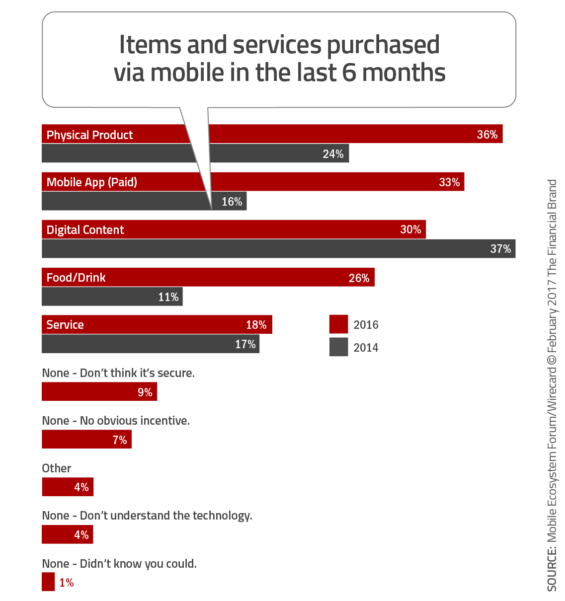 Interestingly, mobile shopping for digital content fell in the last two years, from 37% in 2014 to 30% in 2016. Much of this can be attributed to the move to subscription-based services like Spotify, where monthly payments replaced significantly more individual music track purchases in the past.

The way people pay for goods and services varies widely according to the MEF survey. While 41% indicated that they made a purchase over the past 6 months by typing card details into a mobile website, 35% paid directly from a phone bill (carrier billing). This is especially common in developing countries and with consumers (young or unbanked) who have few options.

Other payment options mentioned included the use of an app (31%) or a mobile wallet in-store. Nearly one-fifth (18%) of consumers in nine countries worldwide have used their mobile phone to pay in a store in 2016, up from just 8% in 2014. 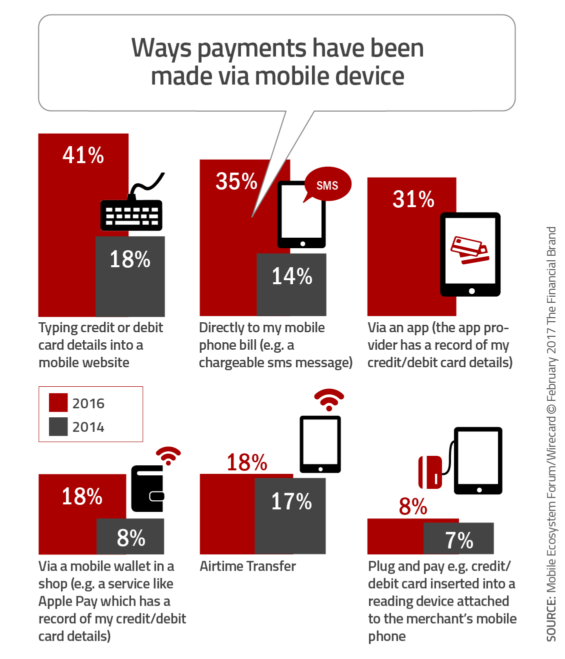 Apple Pay is certainly a factor in this rise of mobile, in-store payments, even though a study by PYMNTs in 2016 found only one person in 20 who can access the feature actually uses it. The in-store payment increases in China are having a greater impact.

However, despite the rise in the use of mobile, there are ongoing issues that need to be addressed. Nearly six in ten (58%) started to pay for something on their mobile, only to abandon the purchase before completed. 21% abandoned a mobile payment because the process took too long, with a third (31%) doing so because too much sensitive information was asked of them. 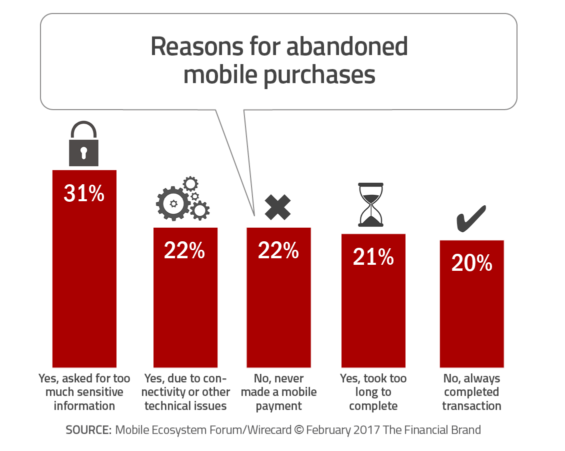 The abandonment rate in the US seems to be the worst, with 66% of US respondents saying they had abandoned a purchase prior to completion. Retailers, such as Amazon, are addressing this issue with one-click ordering options. Apple is making purchasing easier with PIN and fingerprint checkout (now available on the desktop).

Despite the reality that mobile payments are fundamentally safe, the study from MEF shows that most people don’t agree. For example, 17% of respondents say they trust handing a card to a waiter/shop assistant the most of all card payment scenarios. Only 9% trust storing details in a mobile app, with 17% trusting the ability to type data into a mobile site and 22% not trusting any mobile option.

News around hacking and identity theft certainly don’t help the issue even though very little of this news involved mobile payment security. It’s a similar story with privacy. The research showed that 31% of shoppers have abandoned a purchase because they were asked for too much sensitive information.

The Mobile Money Report found that most mobile banking activities have had modest growth over the past two years. Nearly two-thirds of consumers (61%) said they now use mobile for their banking, with 44% using apps to check balances (up from 28% in 2014), 29% using apps to pay bills (up from 20% in 2014) and 22% sending money to another person (16% in 2014). Only 28% of those surveyed prefer branch banking against 26% for apps. 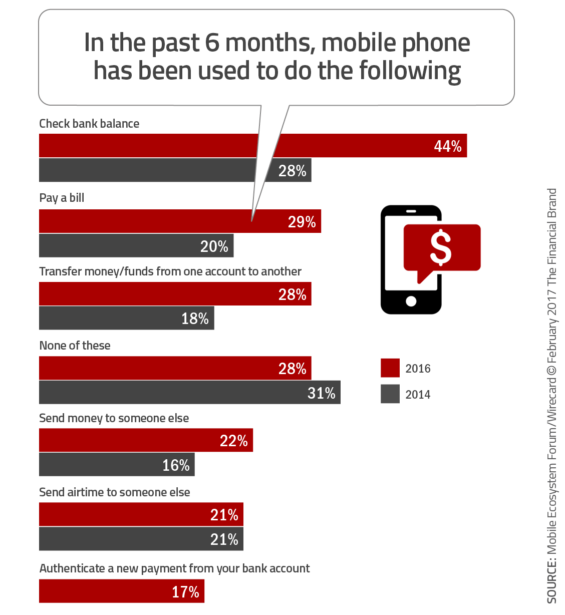 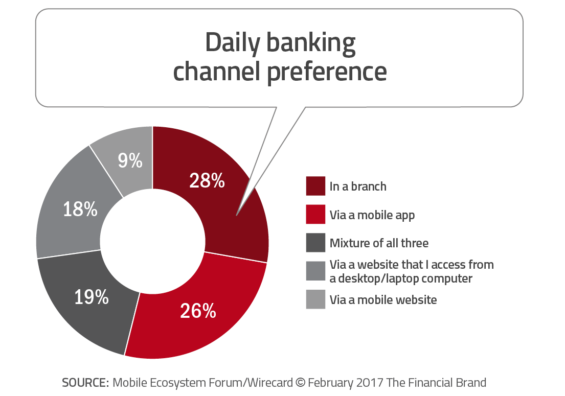 This move to mobile has spawned a growth in mobile-first and mobile-only banks, especially in the UK where regulation (PSD2) makes it easier for start-ups to offer banking services. Firms like Monzo, Fidor, Number 26 and others are beginning to be noticed in this highly mature banking market.

Mobile operators are also testing the waters in some mature and emerging markets. Mobile banking in regions like Kenya and other African nations mostly exclude traditional banks. Instead, users use agents to turn cash into mobile currency they can use to pay family/friends or settle bills. This can be accomplished on a feature phone, enabling a seamless money movement process.

The key to growth of mobile banking will be the education and ongoing promotion of services beyond the basics. The benefits of P2P payments, bill payments and transfers of funds between accounts at multiple institutions will need to be promoted aggressively to change the ingrained habits of the late adapter consumer.

The Future Migration From Desktop to Mobile

The migration from desktop to mobile will only increase over time, with smartphone becoming more powerful with every new release. The message to businesses everywhere — especially financial services — is that if you neglect to offer services and products through the mobile channel, you will lose.

The report makes it clear that care must be taken in how mobile experience are designed. Merely copying and pasting from web to mobile formats will no longer work. Especially when it comes to payments, where the opportunity for success and risk of failure is greatest. As was seen in the research on abandonment and trust, there is little tolerance for missteps by consumers.

“It’s important that the industry builds on this momentum. The research shows we can still do more to improve payment flows, improve consumer trust in mobile money to allay privacy and security concerns,” said Rimma Perelmuter, CEO at Mobile Ecosystem Forum. “But overall, the news is good: mobile remains the key driver of online commerce.”