Subscribe Now Get The Financial Brand's FREE Email Newsletter
A Federal Reserve report shows that increases in mobile banking engagement and mobile payments has increased significantly in correlation with the increased ownership in smartphones. The comfort level with mobile banking is also increasing due to the expanded capabilities offered through a mobile device. But is mobile banking use about to plateau?

As of December 2014, 39% of adults with mobile phones and bank accounts reported using mobile banking according to the Federal Reserve’s 2015 Consumers and Mobile Financial Services Report. This was an increase from 33% a year earlier. The report is the Board’s fourth looking at how consumers access mobile banking and mobile payments. It is also the fourth year of consistent growth overall.

The growth, however, is almost entirely attributed to the growth of smartphone owners, where penetration continues to skyrocket (71% of all mobile phone users in 2014, compared to 61% in 2013 and 52% in 2012). This correlation is reinforced by the fact that 33% percent of consumers said getting a smartphone was the main reason for using mobile banking and for beginning to make mobile payments.

So, the question is whether the growth in mobile banking is simply a reflection of improved hardware capabilities as opposed to a response to a better solution being offered by banks and credit unions? And if this is true, there could be an overall usage plateau on the horizon since use of mobile banking by this increasing segment of smartphone owners has remained stagnant since the survey’s inception (52% in 2014, compared to 51% in 2013 and 50% in 2012). 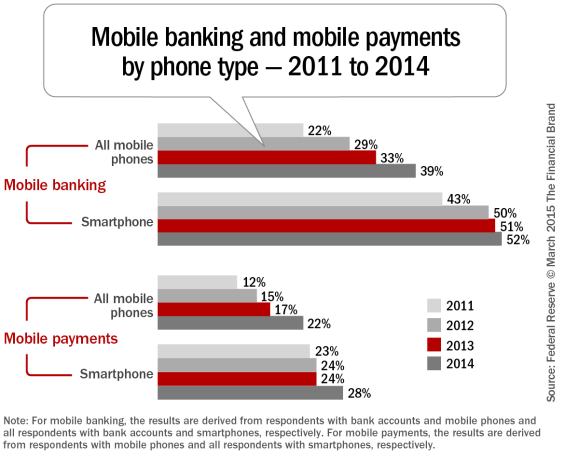 The most common mobile banking activity performed continues to be the checking of account balances or recent transactions, followed by transferring money between accounts. More than half of mobile banking users received an alert from their financial institution through a text message, push notification, or e-mail–making this the third most common use of mobile banking.

The report also found that consumers who use mobile banking are becoming more comfortable with remote deposit capture. More than half of mobile banking users had used their mobile phones to deposit checks, compared to just 38% in 2013. 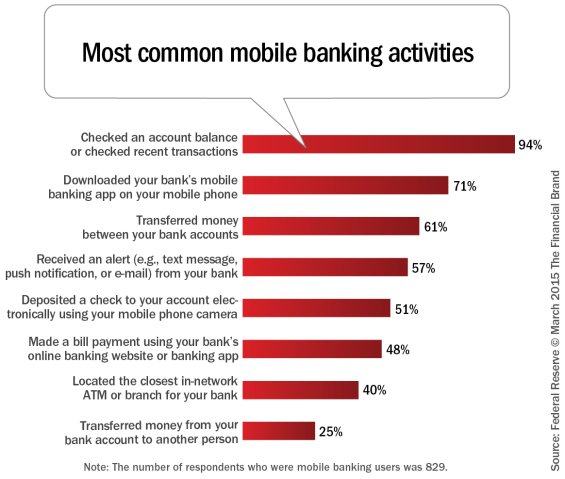 As would be expected, mobile payments activity is less common than mobile banking. Based on the responses to a rather broad definition of mobile payments, 22% of all mobile phone users made a mobile payment in the 12 months prior to the survey, up from 17% in 2013, 15% in 2012, and 12% in 2011.

Rates of mobile payment usage are somewhat higher among smartphone users, with those who reported having made a mobile payment in the previous 12 months increasing to 28%, up from 24% in 2013 and 2012, and 23% in 2011. 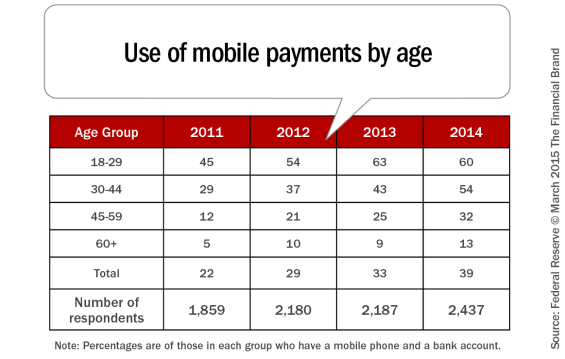 Although using a mobile phone to pay for a retail purchase at the point-of-sale (POS) is still less common than paying bills or making an online or in-app purchase, this type of payment is gaining in momentum. Developments in technology, the entrance of new market participants (Apple Pay, etc.), and increased familiarity with mobile payments in the marketplace may be contributing to this trend.

According to the report by the Federal Reserve, an ongoing challenge to growth of either mobile banking or mobile payments appears to be consumers’ limited demand for them. “Many consumers said their needs were already being met without mobile banking or payments, that they were comfortable with non-mobile options, and that they did not see a clear benefit from using either service,” said the study.

Surprisingly, around one in five (22%) of those with mobile phones and bank accounts indicated they didn’t even know if their bank or credit union offers mobile banking. The good news is that the share who did not know if mobile banking was available from their bank decreased from 28% in the 2013 survey. The share that said their bank does not offer the service decreased as well—from 6% in 2013 to 4% in 2014. 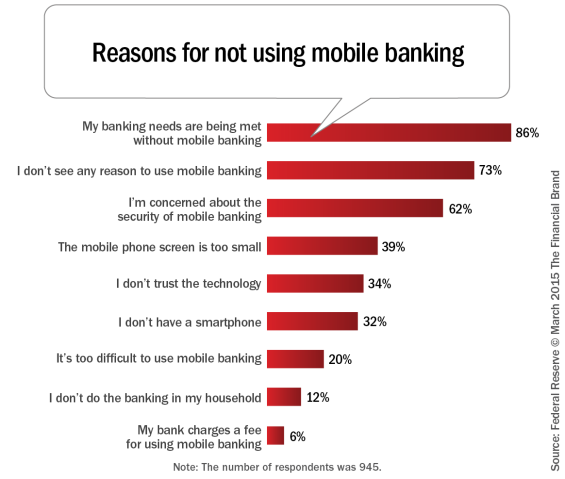 Among those who do not use mobile payments, the primary reason not adopting the technology is that they prefer to use other means of making payments. According to the study, 75% reported that it is easier to pay with other methods, 59% did not see a benefit from using mobile payments with the same proportion citing security concerns. 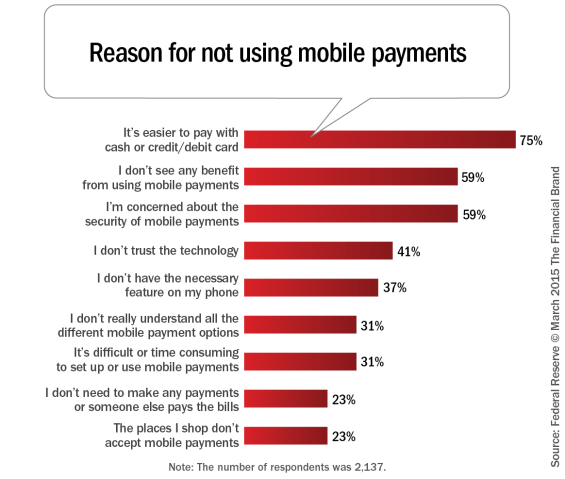 The incidence of reasons for not using mobile payments was relatively the same as in previous years, with the exception of security issues, which dropped from 63% in 2013. Also, fewer respondents reported that not having the necessary features on their phone (46% in 2013), which makes sense given the increased penetration of smartphones over the past several years.

Moving Beyond The Plateau

Being an avid follower of banking trends and the founder of Finovate, Jim Bruene from NetBanker believes some of the reason for slowing acceptance is nothing more than consumer reluctance to try new technology. “Every new banking technology of the past 40 years (including ATMs) have struggled to get more than 50% adoption,” stated Bruene. “That’s not easy to solve. Education helps. But many users just need time to get on the bandwagon.”

More importantly, however, Bruene believes mobile banking growth could be more hampered by flawed mobile banking UI/UX. For him, the problem is poor design relative to other non-banking mobile services. He specifically mentioned:

I would like to provide additional suggestions that could make mobile banking apps closer in usability to non-financial favorites:

The above are far from an exhaustive list, and I realize that some institutions have done a better job than others in addressing some of these customer experience issues. But, for the general mobile banking user to increase engagement and loyalty to today’s mobile banking solutions, they will need to catch up to the best non-financial mobile experiences.

Those organizations that move fast and promote their differentiation will benefit from the increased market share, engagement and potential for increased revenue and reduced costs.