Subscribe Now Get The Financial Brand's FREE Email Newsletter
By increasing mobile banking adoption rates, the average institution can generate millions in additional revenues and reduce attrition by up to 15%.

By Matthew Wilcox, SVP of Marketing Strategy and Innovation, Fiserv

Though increasing adoption rates seem to have settled the question of demand for mobile banking services, the ROI of mobile banking has proved more elusive. Mobile banking, which may not be perceived to produce direct revenue, must be evaluated by indirect results. Accordingly, Fiserv in conjunction with Raddon Financial Group studied mobile banking users, online users, and branch-only users, and compared their product usage, transaction frequency, attrition rates, and revenue generation.

The study found that mobile banking currently offers financial institutions significant ROI with the unrealized potential being in the millions for the average bank or credit union. The value was determined by comparing key attributes in the three months before and after consumers enrolled in mobile banking. The year-long aggregated analysis was conducted at select banks and credit unions using the Mobiliti™ banking and payments solution from Fiserv.

Eight credit unions and nine banks across a range of asset sizes up to $3 billion participated. The exhaustive, one-year study anonomously tracked the activity of 240,000 credit union members and 283,721 bank customers. Respectively, these included about 27,000 and 39,000 mobile users.

The objective of the study was to assess specific return on the mobile investment. Non-users of mobile services served as a control.

The study found that an engaged mobile banking consumer:

The study also found that by increasing the mobile banking adoption rate, the average institution can generate close to $2 million in incremental revenues and reduce attrition by an average of more than 15%.

Compared with 1.3 products for branch-only consumers, mobile banking users average about 2.3 products each from their primary financial institution. For new adopters of mobile services, however, the average number of products per customer increased by 12%. The difference between credit union and bank customers was negligible. 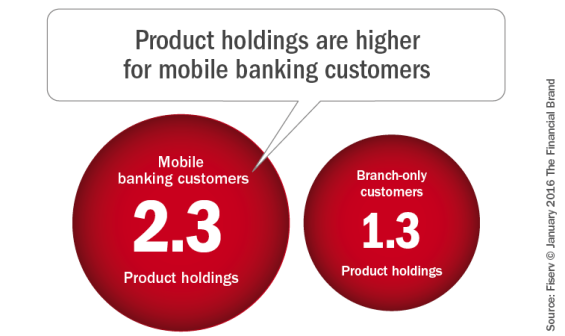 The so-last-century term for average number of different products was “share of wallet.” Perhaps the term has fallen out of fashion as wallets themselves seem to be doing, but the importance of products per customer remains. Consumers who use mobile banking are more engaged with their financial institution, and as a result, this allows for deeper penetration when consumers need mortgages, business services, and other higher-end products.

This potential is greatest when financial institutions use online and mobile channels to provide personalized, contextual offers. Unfortunately, as mentioned in the article, Justifying Investments to Become a ‘Digital Bank’, not all institutions have the same digital channel cross-sell maturity.

Although mobile users account for only 14.4% of the studied banks’ entire customer base, they drove more than 39% of total POS spend. (note: the mobile penetration noted in most industry studies is against the online banking customer base which is closer to 44%).

As for the new adopters of mobile banking during the course of the study, they significantly increased their volume and value of POS transactions. Within three months, new mobile users in credit unions increased monthly POS transactions by 19%. Bank clients came in at an increase of 46%, and, coincidentally, with a 46% increase in average transaction value – from $550 to $801 per month.

Moreover, their ACH transactions increased more than 30% after adoption.

For established and new mobile users alike, the higher transaction volumes may be due to the ready availability of account balance information. Being able to check balances on the fly, at the point-of-sale, might allow more users to purchase with confidence.

Given the revenue-producing nature of debit/credit card transactions, the above increases alone are a strong indicator of the worth of mobile adoption. But mobile adoption appears to enhance cost savings as well.

Within three months of mobile adoption, credit union members decreased monthly in-branch transactions from an average of 4.4 to 3.0. 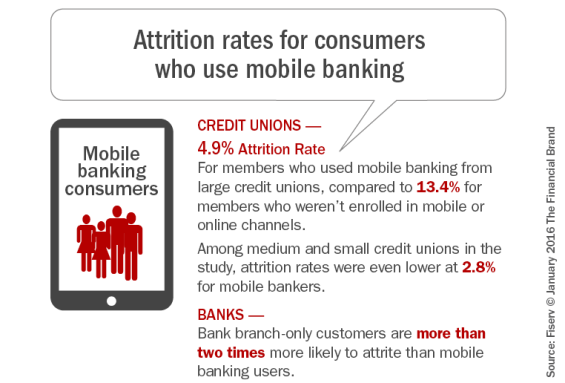 Revenues from credit union mobile users were 36% higher than from branch-only users. Mobile users from the banking organizations in the study generated 72% higher revenues compared to branch-only customers.

Why Promoting Mobile Banking Adoption is So Important

Simply offering mobile banking to customers and members is not enough. It is not like in the movie Field of Dreams where the ongoing theme was, “If you build it, they will come.” Ongoing marketing around the consumer benefits of mobile banking is required if financial institutions want to grow adoption and engagement.

The potential benefits to banks and credit unions? Based on a 30% adoption rate and incremental gains found in the study, Fiserv projected one-year returns for the credit unions and banks that participated in the study.

These revenue benefits don’t even take into account that credit unions and banks alike could achieve significant cost savings from decreased branch traffic.

The potential for increased revenue, decreased attrition, and lower overhead costs is real, and the dollar value speaks for itself. Financial institutions should be glad that customers demand mobile services, as mobile users are among the most valuable customers and members.