Subscribe Now Get The Financial Brand's FREE Email Newsletter
New data reveals that mobile banking has moved well ahead as consumers' primary banking channel for everyday functions. That makes it increasingly important for financial institutions to ratchet up their apps' functions — including adding real-time connections with banking representatives.

For the first time, mobile banking outpolled online banking as customers’ primary banking channel, at least for the most basic banking functions. The data comes from a survey of 2,000 consumers by bank researcher Phoenix Synergistics. Based on a trend established over the past three years, it seems likely that mobile banking will only increase in popularity.

“If you look at mobile banking overall, it is a huge wave that hasn’t crested yet,” says Bill McCracken, president, Phoenix Synergistics. 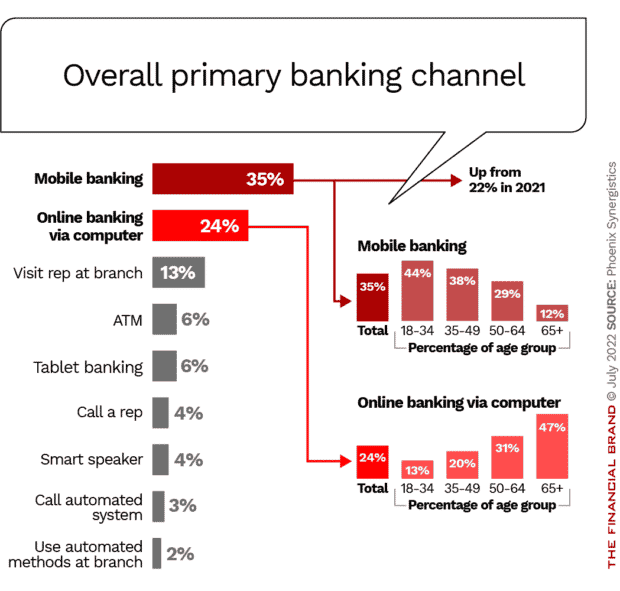 The Blending of Mobile App and Human

Mobile banking growth may seem inexorable, but McCracken believes that to keep the channel’s momentum going, banks and credit unions will need to constantly rachet up its functionality. Beyond simply adding clickable options to an app, as important as they are, the next quantum leap in mobile banking will be to incorporate real-time conversation capability between customer and human representative, most optimally including both audio and video connectivity through the app.

“The next step is to create almost a branch-at-home experience, where consumers can see their representative and talk to him or her,” McCracken maintains. “Why do people need to take that ten-minute drive to the branch to resolve a problem or to ask about a product?”

The next step in mobile banking is to create a branch-at-home experience.

McCracken cited the example of Oregon’s Umpqua Bank, which four years ago debuted its Go-To banking platform, a human+digital combination that was ahead of the pack. Customers choose someone from a pool of bank representatives to be their “go to” banker. They can text or call them through the Umpqua app, to ask about whatever issue they might have. Though it doesn’t yet use video, the program is a forerunner of what mobile banking will increasingly be.

USAA, for another example, says it will incorporate an “asynchronous experience” into its upgraded mobile app later in 2022. This will enable customers to move seamlessly from interacting in the app with USAA’s virtual assistant Eva to communicating with a live agent at the click of a button — with all related messaging carried over to the agent. 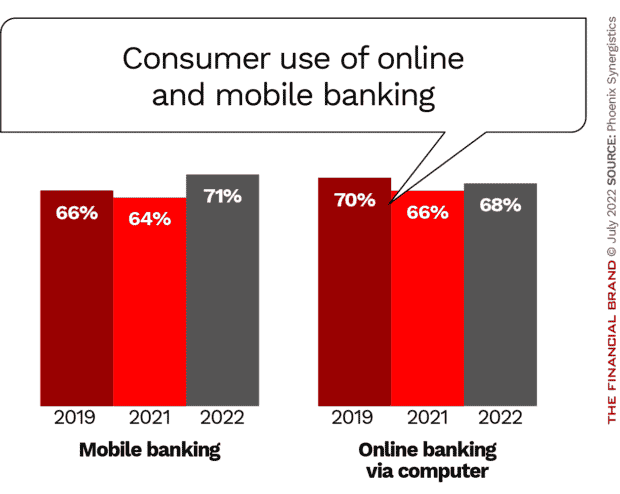 There are demographic distinctions within those numbers that matter. When examining differences in age segments, the 18 to 49 age group generally prefers the mobile channel, while those 50 and over generally prefer the online channel, according to the research data. 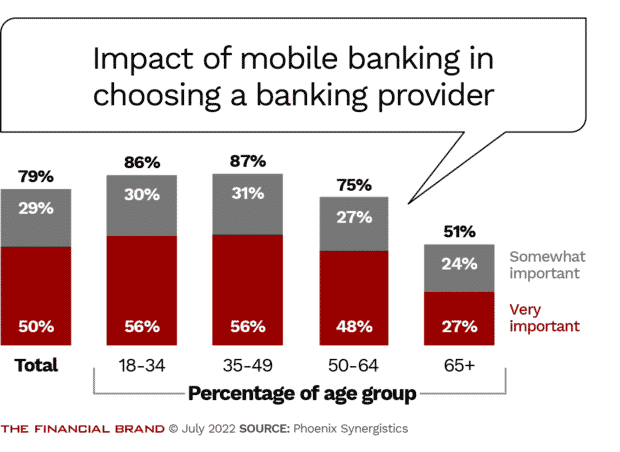 “These differences in age patterns regarding usage signal the role that mobile banking will play in the future,” says McCracken. “Financial institutions must examine their mobile-banking platforms and ensure they are providing excellent customer experiences. Attention should be given to the activities that represent the next level in mobile banking, such as customer service, providing information on products and services, and online applications and approval,” the research analyst states.

Adding importance to that point, a separate Phoenix Synergistics survey released at the beginning of 2022 tracked customer loyalty to their financial institution. Mobile banking services, as a reason for their loyalty, increased from 22% in 2017 to 31% in 2021.

Mobile Banking Is About More Than Lower Headcount

Building on his “branch-at-home” concept mentioned earlier, McCracken, while acknowledging the need to continually beef up mobile app functionality, cautioned against banks and credit unions simply viewing it as a way to automate services while taking human interaction out of the equation.

“You have to expand your view of mobile beyond how to reduce head count,” he states. “There are still times customers will want and need to interact with people. Does it have to be at an expensive branch with tellers and service people? I think the answer is no.” Meaning, the mobile channel should incorporate that capability while making accessing such conversations with live representatives easy, convenient, and intuitive.

All that said, however, McCracken doubts mobile banking will become the sole banking channel for all interactions with a financial institution, at least any time soon. For example, even though up to 95% of a mortgage loan process can be done on a mobile phone, in practice McCracken questions whether that would become the standard.

“At certain points in time a customer wants to talk to a banker face-to-face to be reassured that things are fine,” says McCracken.

He is not alone in that view. In a report on balancing digital and physical channels, McKinsey put forward a similar theme. As one of the report authors told The Financial Brand, “For many people, they actually like the social interaction. They tell us that they like the dialog with live bankers and like the expertise.”