Subscribe Now Get The Financial Brand's FREE Email Newsletter
A study from Chase Bank illustrates how consumers are increasingly doing their banking through online and mobile channels, including while at work, at the store or even while on a date.

Despite concerns around security and privacy, and an increasing desire for enhanced digital banking functionality, the American consumer is making mobile banking a significant part of their daily life. And, because the use of mobile banking apps have become so easy, more consumers are able to multitask, doing their banking on the go where they work, shop and even where they socialize.

According to a study conducted by J.P. Morgan Chase & Co. in conjunction with research firm Braun Research, 33% of consumers are using their mobile app more often and 35% are banking online more frequently than a year ago, while only 16% are stopping by branches more often. In addition, of the more than 1,500 adults surveyed (not confined to Chase Bank customers), 70% of consumers still prefer using a bank’s website or online portal, compared to the 47% who prefer using the bank’s app on a mobile phone or tablet.

Interestingly, 78% of Millennials use a bank’s website or online portal, as do 75% of GenX consumers and 67% of Baby Boomers. 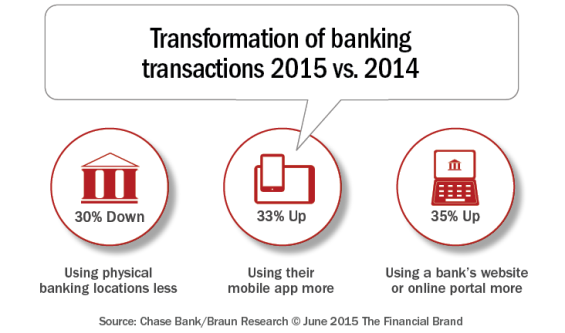 “This survey tells us what our customers have shown us over the last two years,” said Barry Sommers, CEO of Chase Consumer Banking. “They love the ease of handling their routine banking online, on their phone and at an ATM.” 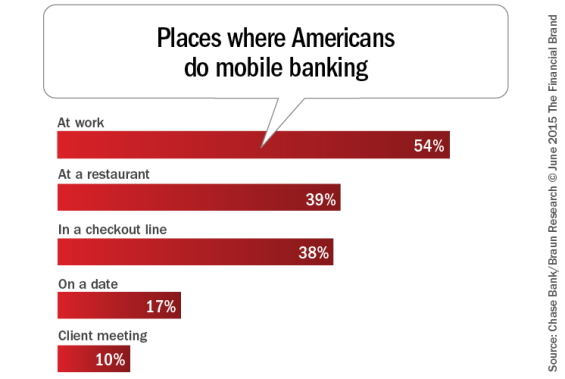 The survey findings show how fast consumers’ views of banking are changing, with fewer people seeing the value of visiting a bank branch. In its 2015 North America Consumer Digital Banking Survey, Accenture found that 81% of consumers said they would not switch banks if their local branch closed. Only two years ago, that number was 48%.

In the 2015 Bank of America Trends in Consumer Mobility Report, it was found that nearly six in 10 (57%) respondents had at least tried mobile banking apps, while more than half (51%) use either mobile or online as their primary method of banking. Less than one-quarter (23%) of respondents and just 6 percent of younger millennials (ages 18-24) complete the majority of their banking transactions at a bank branch.

The importance of digital capabilities is also reflected in banking loyalty. “When people use our digital technology, they’re much more likely to use us as their primary bank,” said Barry Sommers, CEO of Chase Consumer Banking, adding that deposits at the bank grow faster and attrition is about 15% lower with digital banking consumers.

The Chase survey also showed that Hispanic consumers are an increasingly important market segment for digital banks. This segment is banking digitally more often, with 45% using mobile banking apps more often and 48% using a bank’s website more compared to a year ago. They are also using their banking app on the go more than the rest of the population, with 64% doing their mobile banking at work (vs. 54%), at the check-out line at a store (49% vs. 38%) and at a restaurant (47% vs. 39%).

The Chase survey also found Hispanics more likely to use their mobile banking app when viewing their account balance or transactions (37% compared to 23% of the total population) and when doing P2P transactions (25% versus 16% of the general population).

Part of this divergence from the population as a whole could be due to he mobile-centric nature of the Hispanic population. According to a survey of smartphone usage by the Pew Research Center, 13% of Latinos are smartphone-dependent, which means they rely on smartphones for online access and are less likely to own another computing device, compared to 4% of whites.

For this on-the-go generation, 33% indicated an increase of ATM usage, compared to 16% of GenXers increasing ATM use and 10% of Baby Boomers. 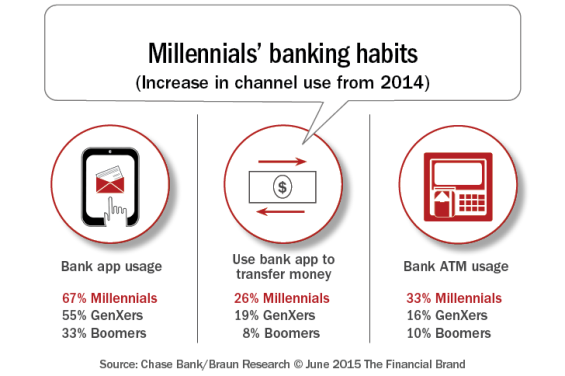 We shouldn’t forget the most entrenched digital channel. Even though 90% of Chase customers still visit branches for advice they still use the ATM and mobile apps for routine transactions they no longer need a teller for, according to Sommers. For instance, Mr. Sommers said May 2015 was the first month Chase saw more deposits at ATMs than with tellers.

As ATMs get smarter, the Chase survey found that Americans are increasingly recognizing the expanded capabilities of ATMs such as: 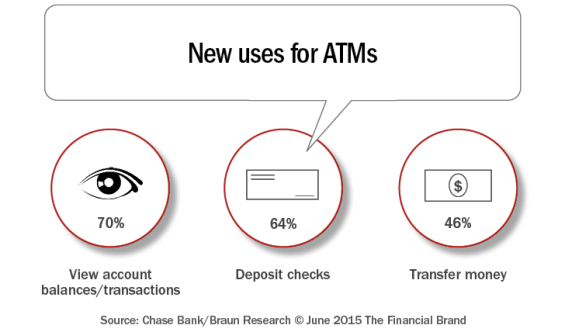