Subscribe Now Get The Financial Brand's FREE Email Newsletter
What are some of the top U.S. banks doing that is innovative and what has quickly become table stakes in a game of mobile app one-upsmanship? And is mobile banking innovation becoming a value-added differentiator that can drive new revenues?

There is no disputing that the U.S. mobile banking landscape is changing rapidly. Larger banks are setting the stage for broader market trends, while smaller banks (and even some regional players) play catch up in the development of new functionality.

Over the past 18 months, mobile banking applications have evolved beyond the basics to include specialized functionalities, improved user experiences and an expansion of platforms supported. A year ago, mobile remote deposit capture (RDC) was live at only five of the top 13 banks. Today, it is a ‘must have’ banking application that has the potential to drive revenue. Similarly, P2P is now taking center stage at most banks despite some logistical hurdles, with five banks adding this functionality in the past 12 months.

How are banks keeping up with consumer demands? How are they keeping up with each other? What’s next? In the third report in a series on the state of mobile banking released by the financial research and consulting firm Celent, a review of new application development is provided along with a glimpse into the future.

In the 44-page report, The U.S. Mobile App Landscape: An Annual Evaluation of Mobile Banking at Top U.S. Banks, Celent found that larger banks tend to out-develop and out-adopt smaller institutions by a significant margin. “The channel is still relatively new, but leaders in the digital channel space are beginning to take offerings into the realm of value-added services that are context-sensitive, timely, and utilize big data”, says Dan Latimore, senior vice president of Celent’s Banking Group and coauthor of the report. “There’s a large disparity among digital offerings—industry leaders are light-years ahead of the laggards.”

Below is Celent’s view of the mobile landscape as it continues to evolve. As can be seen, Emerging Capabilities include a more advanced stage of interaction with more knowledge-driven tools and analytics. While some of these may not be pursued by every organization, Celent believes most will be tomorrow’s standard. Interestingly, some of the functionality in the Future Focus is already being implemented on a global basis.

While the future may be considered speculative, some components are beginning to appear at the more progressive institutions (U.S. Bank and BBVA Photo Bill Pay) and at some of the new players such as Moven, Simple, GoBank and BlueBird 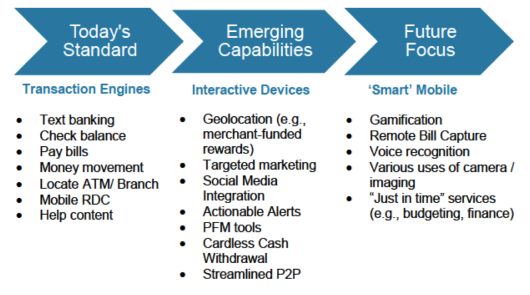 Key Findings of the report include:

How Are The Top Banks Doing?

Mobile is definitely moving beyond the replication of online banking services and into value-added features built to serve more specific use cases and even different segments of the bank (retail consumer, small business, wealth management, commercial, etc.). As shown above, the evolution is trending towards an environment where solutions are being ‘bought’ vs. ‘built’ and where engagement of the customer on a contextual level is beginning to be achieved.

Using a features and functionality scoring sheet for each mobile platform, Celent evaluated apps for the Apple iOS, Android, Safari web browser and text banking. Scores were compiled for the top 13 banks in the U.S., with banks grouped into three categories based on the following criteria:

A very in-depth evaluation was performed for the following functions on each mobile platform to determine breadth of offering. Each function was evaluated on a number of levels with values placed on each of the following capabilities:

Celent grouped the banks in this report into the following three categories: most improved, noticeable improvements, and minimal/ no changes.

According to Dan Latimore, “While Chase continues to build on their mobile excellence, some apps have been playing catch up.” And while not making significant changes does not necessarily mean the mobile banking site was poor, standing still in today’s mobile marketplace is not a solid long-term strategy.

Interestingly, in an unrelated research study conducted by Pivotal Labs for the period May 18 – June 1, 2013, entitled ‘U.S. Banking Apps Report: Customer Reviews’, a different set of ‘winners’ emerged based simply on the number of positive and negative customer ratings in both the Apple iTunes Store and Android Play Store. A minimum number of reviews were required for any app and an averaging of reviews was used for scaling. While significantly less scientific than the Celent research, the Xtreme Labs research provides a social media commentary on customer sentiment around mobile banking apps.

Conversely, PNC (not virtual wallet), SunTrust, TD Bank, Fifth Third, Bank of America, Well Fargo and USAA also appeared on the negative side for the iOS platform in the Xtreme Lab study, indicating that the mobile apps were not considered the best for everyone.

Issues to Address in Future

Beyond the need to explore the development of additional functionality that makes engagement easier and leverages big data more effectively, Celent saw some trends they believed warrant attention in the near term.

As was noted in the June 2013 article around Mapa Research’s study of global mobile banking innovation, U.S. mobile banking apps still haven’t leveraged some of the power of cross-selling from a mobile device. While the Celent research noted that many banks have attempted some form of ‘product pushing’ or advertising of services, there seems to be minimal leveraging of big data insights to drive contextual offers. “Splash screens and real estate crowding banner ads should be left to online banking”, say Latimore. “Apps should move toward offering up product suggestions (without sacrificing user experience) as well as being able to facilitate the beginning of an enrollment process, which can be finished at the branch, over the phone or online”.

While it is understandable that many banks may be a bit skittish around using Apple Maps for branch and/or ATM directions given early flaws with the iOS application, using Google Maps from within the Safari browser was found to be slow and ‘clunky’ compared to the integrated option from Apple. Celent believes the risk may be worth it. Another option (used by both PNC Bank and U.S. Bank) may be the use of augmented reality for locational guides.

Celent noticed that a number of apps in the study had little or no change from the previous report from Q4 2012. While this may not seem out of the ordinary if compared to bank website redesigns, and certainly falls in line with the industry’s normal ‘wait and see’ approach, this speed of change is not acceptable to most mobile users who are used to constant and frequent enhancements to apps.

In addition, as tablets of all forms have exploded onto the marketplace, banks have done a terrible job of developing applications that take advantage of this very unique platform. Beyond the tactile and length of engagement differentiation of this platform, the demographics of the typical user (more affluent and more digitally astute) warrants a greater focus.

There is no disputing that PFM on mobile has yet to gain any traction. Banks are struggling to define what PFM should be and what it should look like on different channels as well as platforms. The majority of consumers are not attracted to charts and graphs on mobile devices (there is a segment however). But PFM on mobile may provide promise if looked at in the perspective of improved receipts, budget updates and even gamification. Merchant-funded reward integration is also possible with geolocational capabilities providing the ability for immediate rewards through the mobile device.

While some banks are testing some of these capabilities (most notably the neobanks like Moven as covered here in my early 2013 blog post), there is quite a bit of debate on whether the investment in development can be recouped without a value-added pricing model.

According to Latimore, “Eventually, Celent imagines high-value advice on savings, alerts for overspending on a budget category, or GPS-enabled deals. The camera is another unique attribute to the mobile phone that can be used to provide a snapshot of spending.”

The Long Road Ahead

Mobile banking has quickly evolved from being a more cost effective way to handle balance inquiries to a core component of every bank’s delivery network. We have moved from a transaction focus to an engagement focus, with CIOs beginning to feel the pressure to build out mobile capabilities.

With basic mobile transactions such as balance inquiry and moving money, simplicity is the ‘new black’. With more sophisticated interactions, the use of ‘big data’ for insight dissemination and solution recommendations is the key to success. In all cases, Celent found a trend away from ‘bolt-on modules’ to more holistic approaches that will require significant investment.

While other industries have reached young adulthood in mobile integration, mobile banking is still in its infancy. With shrinking margins and more regulatory pressure, banks must determine if there is the potential for mobile services to generate revenue that can help offset development costs and replace lost fee income. Without fees from new value added services, what is the ROI of mobile banking? (see previous BMS post, ‘The Revenue Power of Emerging Financial Solutions”, August 2013)

According to Celent’s Dan Latimore, “While mobile banking definitely expands a bank’s ability to reach new and existing customers, and while there is significant movement by some organizations, there is still a long road ahead for others.”