Subscribe Now Get The Financial Brand's FREE Email Newsletter
How badly do consumers want mobile banking? It depends on which U.S. city you're talking about. This study takes a look at varying levels of interest in mobile banking for 12 major metro markets.
Subscribe Now! 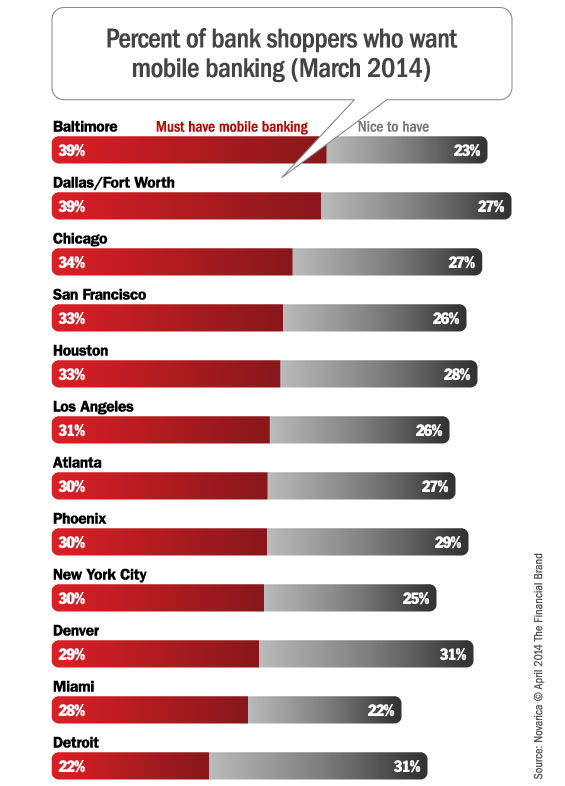 These localized differences demonstrate the challenge bank and credit union marketers have using national market research studies to inform their marketing plans for customer acquisition — which are executed on the ground in local markets. As it relates mobile banking, we find three main factors influence demand from active bank shoppers at a local level:

2.) Competition. Frank Sinatra says winning in NYC is the mark of champion. But on FindABetterBank, shoppers from Chicago are the most demanding. On average, they indicate more must-have requirements than shoppers in any other market – consistently, month-after-month. When we investigated this finding, we found that there are more national and regional banks with branches in Chicago than other large markets. Shoppers in markets with a lot of competition are pickier than shoppers in markets with less competition.

3.) Media/Advertising. Ad campaigns and promotions play a role influencing demand within a local market. In Q4 2013, a national bank advertised using mobile banking messages in a specific market with TV, print and online ads. During the campaign, the percent of shoppers on from that market who must have mobile grew from 22% to 27% on FindABetterBank. However, two months after the campaign was over, the percent that must have mobile in that market declined to 24%.