Subscribe Now Get The Financial Brand's FREE Email Newsletter
Stop thinking about banking being a human versus digital affair and start thinking about a new customer experience that blends both to better serve consumers' needs. That's what U.S. Bank is doing.

There’s no more “one and done” in banking. Maybe there never was, but you had more time to come up with the next round of improvements.

Now it’s more or less a continuous improvement process — something many banking institutions aren’t built for. The nation’s fifth-largest bank has been wrestling with this since rolling out its highly successful, rebuilt-from-scratch mobile banking app in 2019. Along the way, the bank also discovered that mobile banking can’t sit in its own silo.

“When we talk about customer experience, it transcends digital versus human because we want the experience to be as seamless as possible,” says Damian Warren, SVP and Head of Consumer Digital Channels Experience. “We like things to not feel like a channel, but like one cohesive experience.”

Warren says that while there has been a strong push for “DIY” banking in recent years, as more and more can be done remotely and on mobile devices — even on kiosks — U.S. Bank likes to think in terms of “DIY plus DIT.” DIT stands for “Do It Together.”

One of the most frequent social media complaints about fintech apps concerns how hard it is to reach a human.

“We’re seeing lots of more complex financial interactions where even younger generations of consumers want help or advice from a person,” says Warren. “So we have to look at ways to connect the digital to the human for the consumer.”

One example of how these come together is in U.S. Bank’s cobrowse feature for its online and mobile channels. Cobrowsing allows a consumer to ask a branch banker to share their screen on either the bank’s website or its mobile app. This was introduced in its first form in 2020 during the height of the pandemic. In mid-2021 the bank adopted one-way video, so people can choose to see and hear their banker as they confer regarding what’s on screen.

The bank is now approaching 2.9 million cobrowse sessions for 2022. That’s nearly six times the volume seen in 2020. Warren says customer research indicates nearly universal satisfaction with this human-digital combination. (The bank also offers two-way virtual appointments via either phone or video, as well as live appointments, all booked through the app.)

This growth is on a backdrop of increasing digital channel usage. 82% of U.S. Bank active customers now use mobile, online or both channels. Reflecting the overlap, 64% use mobile and 41% use online service.

U.S. Bank has come a long way since it rethought and rebuilt its mobile app. The initial developers’ work, which they continue to build on, has been recognized by multiple industry authorities as leading edge. In September 2022, for example, the bank ranked #1 in overall mobile banking customer experience for the third time in a row in Keynova’s semiannual Mobile Banker Scorecard. The bank also led in specific categories, including ease of use, payments and transactions tasks, and support and access.

A Forrester mobile banking app study in late 2021 gave USAA (#1) and U.S. Bank (a close #2) the highest scores for user experience and praised U.S. Bank for “putting a laser focus on UX improvements in its app.” Both the Keynova and Forrester studies gave kudos for the voice-driven Smart Assistant feature in U.S. Bank’s app. 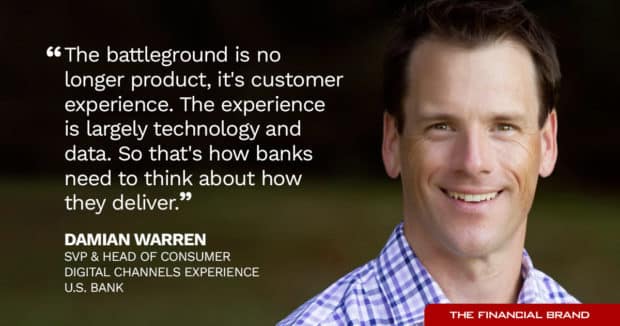 Behind the scenes is where the technology that produces customer experience lives. There the bank is undergoing constant transformation, says Warren, as it strives to improve APIs that draw on the bank’s core systems and its data architecture. Warren says this is critical as the bank works to further personalize its digital services by using customer data in new ways.

“We have to do things ‘below the glass’ more quickly, from a technology perspective,” says Warren, referring to what goes on below the user interface. “We recognize that we are competing with smaller, more nimble fintechs that have built their technology stacks in the last three to five years. We are in a competitive environment where they are aggressively addressing customer wants and needs.”

Putting this in perspective, Warren adds: “The battleground is no longer product, it’s customer experience. The experience is largely technology and data. So that’s how banks need to think about how they deliver.”

Warren says that banking staff has been the source of expertise for a long time. The challenge going forward is to continue to “infuse that into the digital experience” in addition to using live bankers. One example is a “goals dashboard” incorporated into the bank’s app, tech which can help customers work towards financial targets.

The bank drives ongoing improvement of its mobile banking app through internal development and multiple forms of “co-creation” with customers. In an interview with The Financial Brand Warren described who the bank is targeting with digital services and where development could be headed.

Designing digital services can be a balancing act at times.

The prime target for mobile banking is the younger customer, 18-34 year olds. However, the needs of people of 18-25 are frequently different from people 26-34, Warren says, but the broad range is the group that U.S. Bank especially wants to attract with mobile services that add up to an attractive mix for them.

Beyond the age range, Warren says, “ideally those customers would be what we call emerging affluent consumers. We want to be able to bring the full solutions set of U.S. Bank to those customers. This includes not just deposits, lending and cards but also investing.”

The bank’s intent is to offer an integrated approach that will attract these consumers and bring them to the bank much earlier in their lifecycles than might otherwise be the case.

“So, if you’re going after people who are in college or recent graduates, offering features that would help them establish credit and pay off things like student loans, to get them onto a path to saving and investing, would be very important,” says Warren. The app offers an area where financial health data is centralized along with relevant content, for example. 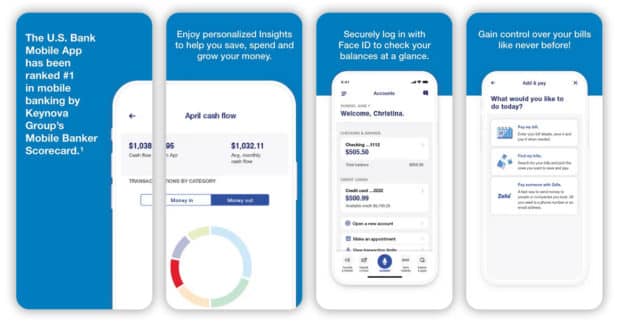 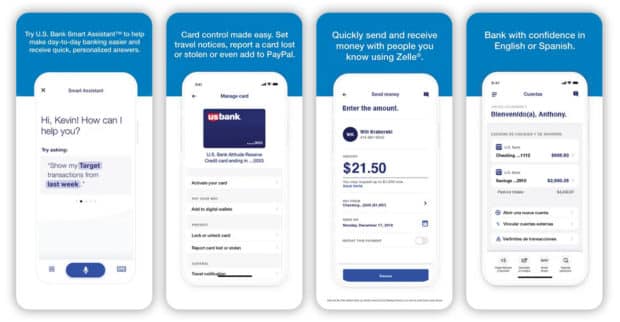 Managing the appeal of mobile banking and other services to older consumers remains important both because they represent the core of current business and also because of their influence. Warren says the bank’s research indicates that in spite of all the other ways consumers’ choice of financial provider can be influenced, family and friends still drive many such decisions.

“You have to serve the customer you have today, too,” says Warren. “This is why we’re paying particular attention to the degree of personalization and customization that we offer in our digital experience. If we can enable you to tailor things to your needs, then we won’t box ourselves into a one-size-fits-all solution.”

“I stress internally that we have to be as good as any of the niche providers, or otherwise we will lose mindshare among our customers,” says Warren. “The younger generation is quite comfortable with having multiple financial apps on their phone to meet individual needs. As a bank, we want to serve all those needs now and over time.”

The challenge, he continues, is to show younger consumers that the bank can serve them as they grow older and their needs grow more complex.

“But we have to be very clear that our customer experience has to be better than the leading fintechs,” he adds. “Otherwise, people will choose the better experience.”

In addition, says Warren, the bank has to drive awareness of the breadth of financial products it offers and the cohesive “do it together” experience it can provide. With the exception of a few fintechs that have become banks, most continue to be narrow players.

Read More: How to Improve the Mobile Banking Customer Experience

Figuring Out What Consumers Want Next

U.S. Bank’s mobile app is both broad and deep, but it’s clear that more and more will need to be added to it to keep up with consumers’ needs. Warren says that it’s been recognized internally that robust funding for development will be a continuing need.

Part of the cost of keeping up is finding out what consumers want to see next. Focus groups are one tool. Another is co-creation sessions, where consumers dig deeper into what could be added to the app and what it could look like. Interviews to ask people how they bank are another avenue.

Warren is also an experienced realist. “People sometimes tell you something that’s different from the way they actually behave,” he explains.

So U.S. Bank has also done studies in the field and in people’s homes to observe how they actually manage their finances, to identify and address real problems.

Testing of alternative concepts is also part of the bank’s process. Sometimes the bank develops two or three ways to address a particular need and lets selected groups of consumers use each in a live environment.

“Then we review the data, look at the adoption and usage patterns, and determine which of those concepts was ultimately the winner,” says Warren.