Subscribe Now Get The Financial Brand's FREE Email Newsletter
Just a few years ago, many in the banking industry predicted that mobile wallets would quickly replace consumer's use of cash and plastic. But mobile wallets haven't exactly taken off. Consumers just aren't that interested. The reality is that mobile wallets still have a long way to go.

What problem do mobile wallets solve? From the consumer’s perspective, not much. They don’t like change, and see little need to switch to a different payment method unless there’s a clear benefit.

For most consumers, using plastic is still pretty convenient. That’s why credit cards are still the most popular method of payment — especially for online purchases and more expensive items — followed closely by debit cards. 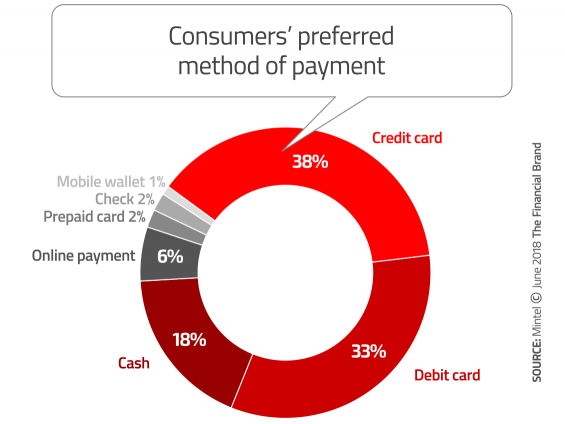 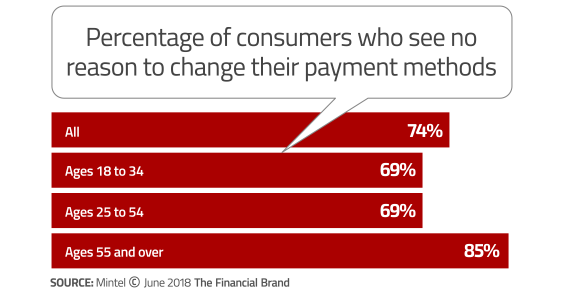 According to a study by Mintel, three quarters of consumers simply don’t see a need to change their payment behaviors, and only one quarter (27%) said they had any interest in using their smartphone as a wallet. There is significant reluctance to convert to mobile wallets — especially among women, who are roughly half as likely as men to have any interest in them.

A measly 8% of consumers say they have used Apple Pay, the most popular mobile wallet today. Another 7% have used Android Pay, and 6% have used Samsung Pay.

“Most adult consumers have fairly ingrained payment behaviors, and switching from a traditional wallet to a mobile one will take time,” Mintel wrote in their report. “If financial marketers are looking to carve out a greater portion of a consumer’s physical and digital wallet, innovation needs to concentrate on ways to continue to increase speed, accuracy, and security across payment types.”

According to research from Phoenix Marketing International, consumers are now less likely to link a credit card to a mobile wallet than they were a year ago, with only 18% linking a card in 2018 and only 14% using a mobile wallet to make an in-store transaction.

In the YouGov study, one in five U.S. consumers said they think that payments will become completely cashless within their lifetime. Half of those believe that cash will disappear within the next five years.

Consumers may say they like the idea of a cashless society, but they still have serious reservations about mobile wallets. According to research fielded by YouGov, 43% of consumers don’t think mobile wallets are secure, and 38% are concerned about losing their device and therefore being unable to make any payments. In a similar study, Experian found that more than half (55%) of consumers prefer to use credit cards due to safety concerns.

Just listen to what consumers have to say when Mintel asked them why they are hesitant to use mobile wallets:

Even if a consumer does use mobile wallets, they are unlikely tell friends and family use them as well. 42% of consumers who use mobile wallets would not recommend the service vs. 31% just one year prior, according to a survey by Auriemma.

What’s the Future for Mobile Wallets?

The future for mobile wallets is hazy at this point, although it seems hard to believe that in an increasingly wired world that more and more payments won’t migrate to digital channels. After all, peer-to-peer payment platforms like Venmo and Zelle have been well-received by consumers. But inertia is a powerful force, and change doesn’t come easy.

“While digital payments are steadily growing in popularity, cash remains very much a part of consumers’ financial lives, even in the least cash-friendly countries,” notes Cleopatra Mavredis, Global Marketing Manager for Channel Solutions at NCR.

Some analysts in the banking industry, like Karen Webster with Pymnts.com, postulate that maybe — just maybe — mobile wallets won’t ever enjoy widespread adoption since they don’t seem to solve a real consumer problem.

“With few exceptions — Starbucks and Walmart Pay, to name two — mobile wallets are something the average consumer hasn’t really wanted to use at all, or at least not consistently enough to make it a habit,” Webster argues.

That said, the road ahead won’t be easy for mobile wallets. There are a number of challenges. For starters, it’s hard getting payment systems from an array of multiple providers to talk to each other… and deliver a frictionless cashless transaction. Another hurdle is that consumers typically don’t earn rewards when using mobile wallets, like they do with their airline mileage cards or cash-back programs.

According to Mintel, this presents a significant opportunity for financial marketers looking to increase adoption of mobile wallets. In their research, Mintel found that discounts, rewards and coupons could get consumers to switch their payment type over to mobile wallets. 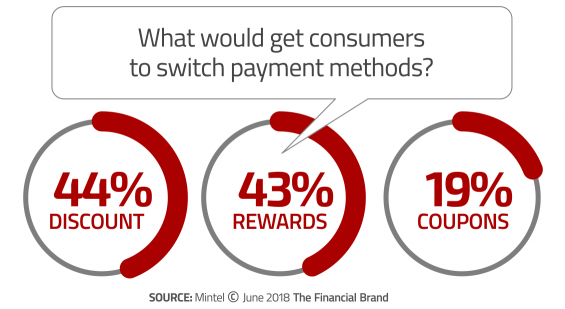 “Banking providers who employ loyalty programs to engage and retain customers are better placed to increase usage and adoption of their mobile wallet service, thereby driving revenue growth,” says Ovum analyst Eden Zoller. “However, they must still address the gaps that exist between what customers want and what they are being offered.”