The fifth annual “Billing Household Survey” from Fiserv assessed the bill payment habits of active online households. The study revealed consumers pay bills in multiple ways, with more than 20% changing how they pay from month to month. Mobile bill payments make up a growing portion of overall payments, particularly among smartphone owners, among whom mobile bill payment grew 41% since 2011.

Three out of four consumers use at least two bill payment methods each month, and more than 20% of consumers change the ways in which they pay their bills from month to month, for reasons that include availability of funds, payment due date and amount owed. 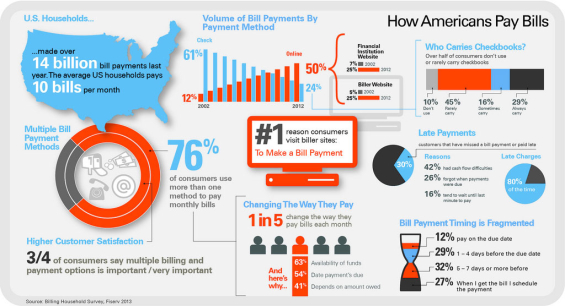 Payments initiated via a mobile device – such as through an app – still make up a relatively small percentage of bill payments overall, but gained momentum year to year. 8% of online households – representing 8 million total households – paid at least one monthly bill this way, up from 6% in 2011. In addition, 3% of infrequent and non-Internet users – representing 720,000 total households – are using mobile bill payment. Growth was most notable among smartphone owners, with mobile bill payments among this group jumping 41% during the previous year. In addition, one in five consumers who own a tablet paid a bill through a bank or biller site using their tablet. 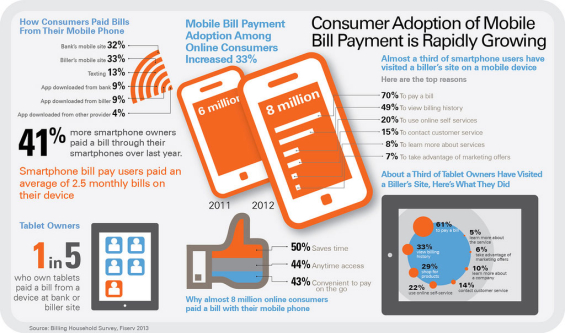 The drivers for mobile bill payment among consumers who have made them include: mobile as a payment option saves time (50%); offers anytime access (44%); and is most convenient when on the go (43%). When asked what mobile billing and payment capability they are most interested in, nearly one in three respondents indicated they are very interested in viewing and paying bills from their smartphone.

Online bill payment at financial institution and biller websites has become the norm among online households, with 73% of those who access the Internet at least once a week now paying at least one bill online each month. These consumers are not only paying bills online, but they are also receiving them there, with 48% of online households receiving at least one electronic bill (e-bill). E-bills contain the same information as paper bills, but are delivered through a financial institution or a biller website. E-bill usage is also having a positive effect on customer relationships, with 37% of consumers who receive e-bills saying it improved their relationship with the company from which they received the bill.

In contrast, infrequent Internet users, defined in the survey as those who accessed the Internet less than once a week, and non-Internet users, are still reliant on checks when paying bills. Of this group, 75% pay at least one bill via check each month. 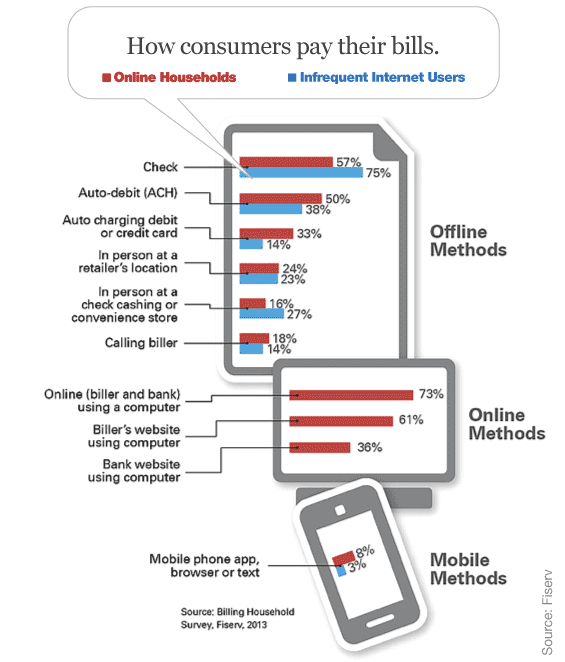 30% of survey respondents paid a bill late within the previous year, primarily due to cash flow difficulties. This was up from 28% in 2011, but down from 38% in 2010. Infrequent and non-Internet users were more likely to report that they paid late because they had trouble keeping track of their bill, with 25% saying this was an issue. This group was also three times more likely to incur late fees because they had difficulty tracking bills, and were three times as likely to report that they lost a bill that came in the mail (19% versus 6% of online households). Only 7% of online households said that trouble keeping track of a bill caused a late payment.

When paying monthly bills, online households are more likely to use auto-debit (50% of online households versus 38% of infrequent and non-Internet users), in which a payment is automatically withdrawn from checking or savings account each month.

Both groups are equally likely to walk in and pay a bill in person at a retail location, such as a department store or mass merchandiser, while infrequent and non-Internet users are significantly more likely than online households to walk in and pay a bill at a convenience store, grocery store or check cashing store. Consumers who pay bills in these locations say they prefer the personal interaction and like that they can receive a receipt as proof of payment. 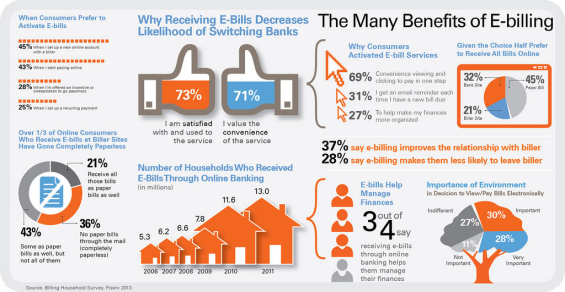 The fifth annual Billing Household Survey was conducted in May 2012 by The Marketing Workshop on behalf of Fiserv. Online surveys were completed by 1,600 respondents and phone surveys were completed by 400 respondents, representing all 120 million U.S. households. The survey was developed by Fiserv Consumer Insights, which has conducted research on consumer financial habits for more than a decade.