Subscribe Now Get The Financial Brand's FREE Email Newsletter
Two research studies on mobile banking tell financial marketers where they need to pay more attention and how they should address this critical channel.
Subscribe Now!

One study commissioned by the Federal Reserve System examines the increasing impact mobile tools have had on consumers’ banking, budgeting, shopping and payments behaviors. The report titled “Consumers and Mobile Financial Services” presents findings from an online survey with over 2,200 participants, conducted in December 2011 and January 2012. The report explores the use of mobile technologies as a means to access financial services and make financial decisions.

The study concludes that the ubiquity of mobile phones is clearly changing the way consumers access financial services. Today, 87% of the U.S. population has a mobile phone, and 44% of those are internet-enabled smartphones. 21% of mobile phone owners have used mobile banking in the past 12 months. Compare that to the 68% of those consumers with regular internet access and a bank account who have used online banking in the past 12 months. In simple terms, mobile banking has exploded into a channel about one-third the size/significance of online banking …and it’s still growing strong. 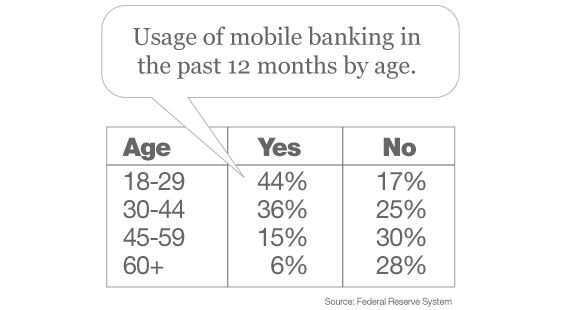 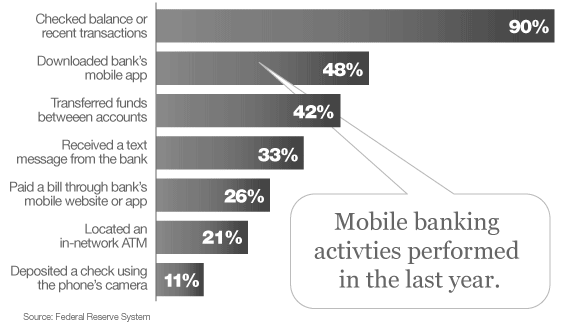 Consumers report using mobile banking up to 60 times per month, however, the median number of mobile banking transactions is four or five times in a typical month.

Two major impediments to consumers’ adoption of mobile banking and mobile payment technologies are (1) concerns about security and (2) the possibility of hackers remotely accessing consumers’ phones. Concerns about the security of the technology were the primary reason given for not using mobile payments (42%), and the second most common reason given for not using mobile banking (48%) altogether.

In another study, ath Power Consulting concluded that banks were not adequately promoting their mobile banking offerings.

“It is alarming that only 10% of users were prompted to first use their bank’s mobile channel by their actual bank,” said Frank Aloi, President and CEO of ath Power Consulting. “This indicates a clear lack of customer education, yet an obvious opportunity for banks to take initiative to promote their offerings.”

“Many people weren’t aware of some of the things that were possible,” Michael McEvoy, managing director at ath Power Consulting, told American Banker. “They didn’t know, for instance, if their bank offers remote deposit capture.”

Customer support is another facet lacking in banks’ mobile services. 40% of all mobile bankers failed to find links for technical support.

“Users feel they’re not getting the kind of mobile banking help and guidance that they’d like to have,” McEvoy points out. “Some complained about difficulty navigating the app. Some felt there was a lack of support and guidance to help if you’re not sure what to do next.”

On the upside, the study found that mobile customers are more loyal. Only about 1 in 8 mobile banking customers say they’re thinking about changing banks some time in the next two years compared vs. 1 in 5 among the general customer base. For this reason alone, financial marketers would be wise to fuel interest in- and adoption of mobile solutions.

In the ath Power study, 70% of mobile banking users said that online banking was their primary channel of choice. 16% said mobile banking, 9% said a branch, 3% said their phone and 2% said an ATM.

Opportunities Lurking Among Gen-Y, Minorities, the Unbanked and Underbanked

Mobile phone penetration is high among younger generations, minorities, and those with low incomes — groups that are commonly unbanked or underbanked. For instance, 89% of African Americans and 86% of Hispanics own a mobile phone, and they are far more likely to have smart phones than Caucasians.

Unsurprisingly, mobile phone adoption is highest for younger age groups: only 5% of individuals ages 18 to 24 do not have a mobile phone, and half have a smartphone.