Subscribe Now Get The Financial Brand's FREE Email Newsletter
Too often mobile banking apps pack in so many functions that consumers get utterly lost. Banks and credit unions must find the balance between elegant simplicity and robust service assortments. Personalization may be the best answer, along with easy access to guidance for mobile users.

Mobile banking through both mobile-optimized sites and mobile apps has become a major factor in consumer financial services. But that doesn’t mean banks and credit unions have been hitting the customer experience bullseye every time.

In fact, research from multiple organizations indicates that institutions have been making two mistakes: introducing too many apps and loading them with so many new features that consumer increasingly find them confusing.

The stakes for getting mobile banking right grow higher as more and more consumers do their banking on smartphones. 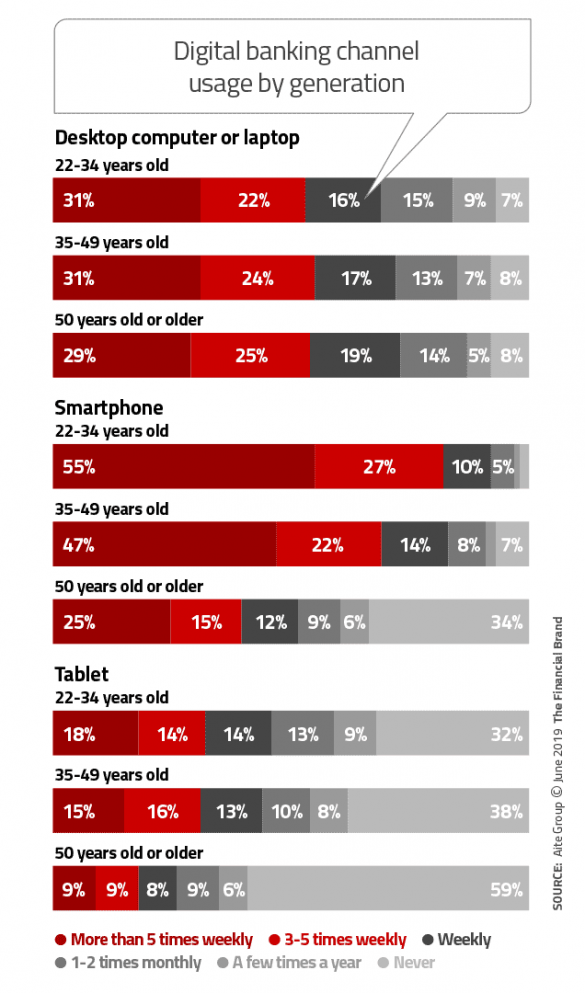 Usage of mobile continues to spread across generations, much as social media did. “Initially Facebook was for young people,” says Bob Neuhaus, Vice President of Financial Services Intelligence at J.D. Power, “and now the fastest-growing group on Facebook is Baby Boomers.”

J.D. Power performed an analysis across four of its annual major retail banking satisfaction studies and found that consumers like mobile apps less, overall, compared to the past because of a flood of new features that they often don’t understand or can’t figure out how to use. The research found a significant ratings advantage for institutions that offered apps that were easier for consumers to comprehend.

Neuhaus says the rise in confusion came because consumers realized there were tasks they could accomplish on their computers that they couldn’t on their mobile devices. As they clamored for the ability to do everything on their handhelds, many providers obliged, moving apps beyond basic functions to more advanced ones — and often wound up creating a less-than-satisfactory customer experience in the process. 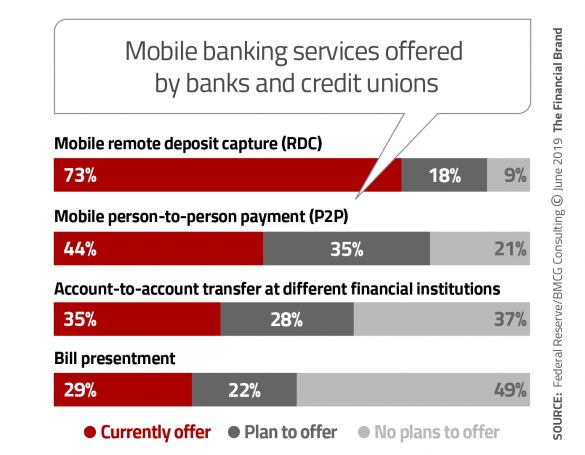 “Today, millions of U.S. banking customers use apps to manage their money, yet these experiences rarely evoke positive emotions — some are frustrating and negative, while others are simply neutral and utilitarian,” according to an edition of “The Forrester Banking Wave: US Mobile Apps.” The report notes that U.S. institutions’ mobile apps tend to be weak on self-service functions like setting alerts.

To make mobile banking better, the report continues, digital designers have to figure out what’s missing, but also what consumers’ true priorities are.

Simply giving consumers a robust search function can help them figure out where to go for what they need. The Forrester report included search and navigation functions among the user experience factors forming part of its ranking methodology.

Ally Bank, which led the ratings for that part of the study, received high marks for its Ally Assist, an app-wide search function, and for not cluttering mobile pages with generic ad messages. Chime Bank’s website brags, “Finally, a banking app built by a tech company,” and the neobank indeed earned the highest Forrester rating for search and navigation. One reason was its “sticky headers” — page headers that remain on screen even as the user scrolls up and down. Chime also got points for ditching bank language in favor of clear English.

Power’s Neuhaus thinks that, besides better design thinking, consumer education can help clear up app confusion. This begins with having every branch-level bank or credit union employee trained so thoroughly in the institution’s app that they can answer consumer questions and show them how to do things on it. Making videos available on the app or on the website can also help, says Neuhaus, but “if you can engage with the consumer face-to-face, that’s always better.”

Sheer simplicity can also make for an elegant app. In the Power research on credit card apps, overall consumer satisfaction came in higher than for retail banking apps. Credit card apps are narrower, by definition, and this drives “a more tailored visual user experience that limits content to pertinent information and key functionality,” the firm found.

Financial institutions face a balancing act that is subject to continual adjustment.

Do Financial Institutions Try Too Hard to Trim Humans?

One element of the confusion that mobile banking users experience comes from institutions’ thinking of digital-centric as digital-exclusive. This can lead to trying to stuff too much technology into the box, overloading the consumer.

“The decision to build a new app or not should be driven by customers’ mobile moments, not product teams.”
— Forrester report

“As the capabilities of online and mobile banking increase, digital teams need to help customers easily and quickly find the features and content they need to achieve their goals,” states a Forrester report. “Some questions or problems are too complex, too important, or too urgent to be resolved through digital self-service, driving customers to seek human help. Banks should make it easy for customers to reach a person when they need to, over the phone or via chat, video, or messaging.”

Aite Group notes in a report that the “move to digital has challenged financial institution’s ability to connect with their customers in meaningful ways. As U.S. financial institutions of all sizes are winning business based not only on the products they offer but also on the customer experience, digital banking is at an inflection point.”

Analysts are suggesting more discipline in building mobile banking apps, enforcing more rationale throughout banking organizations than simply having technologists build a new app for every part of the institution that wants its own mobile flagship.

In the Forrester report “Banks: You’re Building Too Many Apps,” the firm notes that some institutions have as many as 20 apps on the street. While narrower apps can be clearer, as noted earlier, that may not be what’s creating the internal demand for so many diverse apps. Instead, it may be departmental ego.

“Are your motivations truly customer-centric?” the report asks. “Often the demand for building new apps comes from internal product groups that want apps for specific products, such as dedicated apps for different credit cards — but that’s a product-centric, not a customer-centric, approach. The decision to build a new app or not should be driven by customers’ mobile moments, not product teams.”

Is Personalization a Better Answer for Mobile Clarity?

In a BBVA blog, Onur Genç, now Group CEO, compared banking to Amazon and found the industry far behind the ecommerce company.

“Expectations of banks’ digital offerings continue to rise as consumers are exposed to the seamless experience of retailers such as Amazon,” Genç wrote. “While most financial institutions are offering transactional access to accounts and information via smartphones, Amazon is making suggested ‘next purchases,’ offering subscription discounts for repeat purchases, and providing ‘Buy It Again’ offers. That level of personalization, something consumers find on almost every retail site in some form or other, is what consumers, especially digital-native customers, are expecting.”

“If an app is designed to adapt to each individual consumer, then it goes beyond the demographic targeting of an app.”
— Robert Neuhaus, J.D. Power

Neuhaus believes this is ultimately the direction mobile banking apps must take for better service and to deal with the issue of consumer confusion. Instead of putting everything an app can do in front of the consumer at once, he says, personalization of apps would draw on the consumer’s behavioral data to determine needs and preferences. This would lead to prompts and suggestions from the app, which would lead the consumer to the appropriate tools, services or choices.

“If an app is designed to adapt to each individual consumer, then it goes beyond the demographic targeting of an app,” says Neuhaus.

One potential aid to personalization is the chatbot. Forrester’s wave report points out that Bank of America’s mobile app is strong in all ranking categories, “with Erica as the linchpin.” Erica is BofA’s artificial intelligence powered digital assistant. The report gives Erica high marks as a search mechanism and as a proactive guide for consumers to app features and use.

Be Open to Fresh Insights and Willing to Change

Now that mobile apps have become table stakes in banking, willingness to rebuild from scratch may also become so. Some institutions are taking the need to make apps easier and friendlier to heart. U.S. Bank launched its new mobile banking app after the Forrester wave study was completed. (The old app was lowest rated among the eight apps reviewed.) Among the features is guided assistance if the consumer isn’t clear how to handle something. The new app features a personalized dashboard that analyzes consumer spending in real time and offers tailored savings advice. 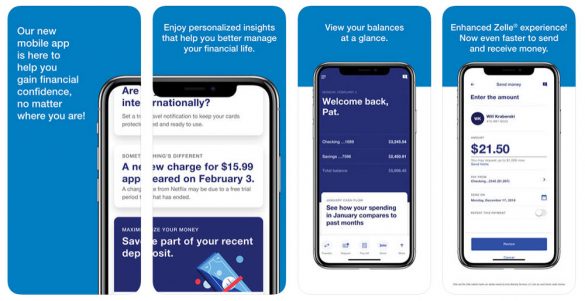 Some of the new features, including personalized insights, of U.S. Bank’s completely revamped mobile app, as posted in the App Store.

There is also something to be said for getting “fresh eyes” on an app that appears to be confusing consumers. Forrester points out that digital developers know the app very well because they built it. They can’t assume consumers have that level of understanding of where to find functionality and how deep it goes. 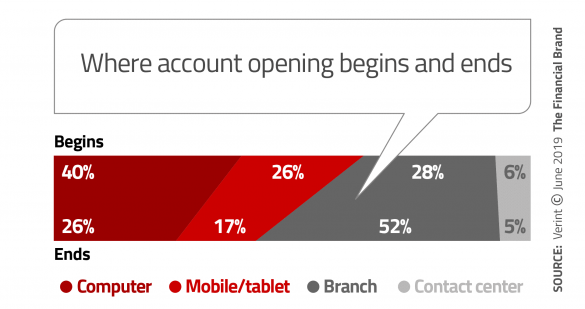 “For example,” Forrester states, “a customer won’t know how much money she can send on Zelle unless you tell her. Digital teams should gather insights from usability testing, keyword search analysis, and call center records to understand what questions customers have, then address them in the content and help strategy.”