Subscribe Now Get The Financial Brand's FREE Email Newsletter
Mobile banking may be on the rise, but so too are the efforts of hackers, causing many consumers to question the security and privacy of this increasingly popular channel.
Subscribe Now!

GOBankingRates investigated how secure consumers feel about banking over their smartphones. They found that, while 44% of consumers say they aren’t worried about mobile banking, the majority have major concerns about accessing their bank accounts over their phones. GOBankingRates’ poll, which asked respondents about their biggest mobile banking fears, revealed consumers’ concerns include technical issues, missing funds, misuse of information, and lack of paper documentation. 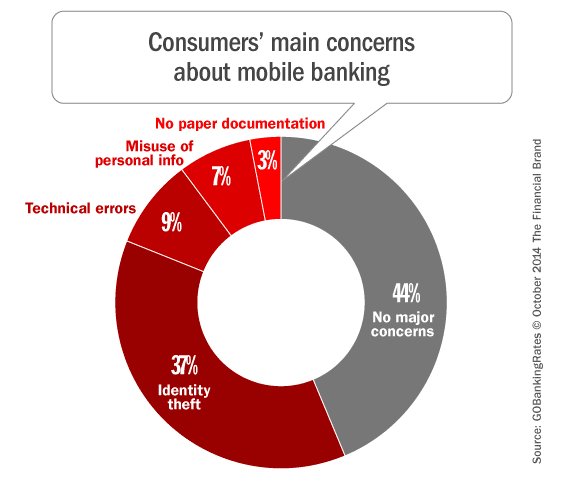 Reality Check: It’s going to be difficult convincing consumers to adopt mobile payments and mobile wallets as long as the financial industry continues to have security issues. Between phishing scams and hacks at retailers like Home Depot, consumers see a ton of risk.

“It hasn’t been a great year for cybersecurity,” says Edward Stepanyants at GOBankingRates. “From Target’s Black Friday hacking which compromised the personal information of 110 million customers, to the security breach at JPMorgan Chase affecting two-thirds of American households, data breaches have become such a common news item that they now seem to warrant a monthly roundup.”

Those ages 45 to 54 had the fewest concerns about mobile banking, proving (yet again) that it is not the Millennial generation who is most comfortable with digital banking technologies. Respondents ages 55 to 64 were those most likely to have major concerns — no surprise there. Gen X respondents were most likely of all age groups to be concerned with having paper documentation. Those under the age for 45 were 43% more likely to be concerned with misuse of personal information than those who were older.

Those ages 18 to 34 were far more likely than any other groups to be concerned with technical errors resulting in missing funds.