Subscribe Now Get The Financial Brand's FREE Email Newsletter
Correlated to the growth in the sale of mobile devices and the introduction of improved digital banking applications, mobile banking is increasingly becoming a habitual part of a consumer's lifestyle.

Opportunities are being created by evolving devices, applications and connectivity, introducing new functionality that was previously unthinkable. The result is that more Americans than ever are becoming addicted to mobile banking.

To better understand the buying and usage patterns of the modern mobile banking consumer, Carlisle & Gallagher Consulting Group (CG) conducted an online survey of 1,005 U.S. consumers as well as surveying financial services executives at the top 20 U.S. financial institutions. The research also sought to better understand how mobile devices, and the shift in mobile device size (tablets getting smaller, smart phones getting larger), will influence how consumers do their banking in the future.

“An ever-increasing consumer demand for instant gratification is seeping into every facet of our lives, including how we bank,” said Byl Cameron, CG’s Digital Practice Lead. “Consumers want to do everything on every device that they own: laptop, smartphone, phablet or tablet.”

Mobility continues to transform the way consumers shop, transact and communicate. Deloitte Consulting cites 2013 as a key inflexion point in the evolution of the telecommunications sector: the year in which global smartphone shipments overtook feature phones, and tablet shipments surpassed PCs. In fact, the revenues generated from sales of smartphones and tablets are due to soon overtake those of the entire consumer electronics category.

According to the Carlisle & Gallagher study, mobile device growth will dominate the next 24 months. All online survey respondents expect to buy more mobile devices by 2016, with 84% planning to purchase a smartphone, 26% a laptop, 25% a tablet, and 14% a phablet.

These purchases will add to an already impressive family of devices owned by most respondents. More than 50% of the consumers surveyed owned three digital devices (laptop, tablet, smartphone, phablet), while more than a third owned two digital devices. 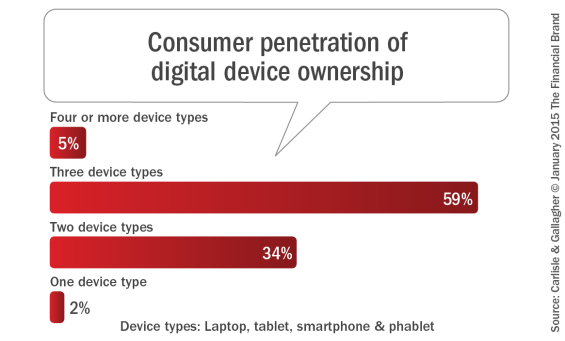 Despite ongoing predictions of its imminent demise, the laptop still remains the most popular device overall. This is a legacy from the PC era and due to the device’s benefits from a ‘content creation’ perspective, compared with tablets, phablets and smartphones that are primarily designed for ‘content consumption’ and communication.

As a result, laptop banking is the strongest digital channel, but is expected to decrease from 84% to 81% over the next two years. Alternatively, banking via a smartphone is expected to jump from 52% to 62%, with tablet banking increasing to 44%, and phablet banking more than doubling, from 5% to 11%. 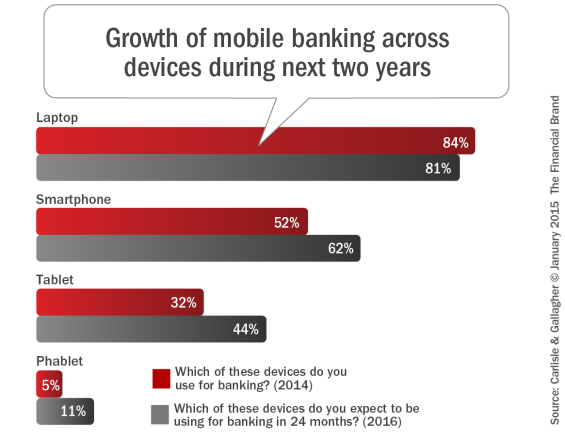 Rise of the Phablet

Thanks to the introduction of the iPhone 6 Plus and increasing viewing of video content on mobile devices, there has been a recent upsurge of phablet purchases and usage among all demographic groups. The CG study illustrated the impact of this growth on banking, finding that 46% of U.S. consumers are more likely to conduct mobile banking due to larger devices, such as a phablet.

Other characteristics of a typical phablet owner were:

“While the use of a phablet for banking is still small compared to other digital devices, this growth is expected to continue to accelerate as more consumers opt for increased real estate as part of their mobile experience,” stated Cameron in an exclusive interview with The Financial Brand. In fact, one in six U.S. consumers believe mobile banking is an important reason to buy a large screen smartphone/phablet.

“CG believes that phablets will have approximately 30 percent of the mobile device market share by 2020 and become the dominant device for mobile banking,” said Cameron. “We also project that tablets will decline in popularity, especially as a device on which to do banking. Our study found 68 percent do not use tablets today for banking.”

While consumers are focused on three mobile banking activities: checking balances, transferring funds and paying bills, they are also selective as to what types of transactions they performed on each device.

In other words, consumers who have a three-device lifestyle interchangeably use their laptops, tablets and smartphones for the most frequent mobile banking activities:

As depicted in the radar chart above, depositing checks with mobile devices (smartphone or phablet) is gaining popularity. More than 60% of phablet and smartphone users surveyed (online survey with a bias to higher income and younger age) are depositing checks remotely. Alternatively, alerts are primarily being received on laptops and tablets, indicating app-based alerts as opposed to real-time SMS texts or email alerts that are more easily responded to via mobile devices.

‘The radar chart illustrates a number of clear opportunities for improvements in the delivery of mobile banking,” stated Byl Cameron in an interview with The Financial Brand. “The lack of penetration of digital alerts, mobile shopping tools, account opening functionality, live chats and electronic signatures provide guidance for organizations wanting to differentiate mobile banking services and increase both acquisition and engagement.”

As part of their mobile banking study, Carlisle and Gallagher provided the following recommendations: