JPMorgan Chase hasn’t given up its belief in an omni-channel banking strategy. However, the pandemic period accelerated a long-term trend towards digital channels among the megabank’s consumer and business customers that it hopes to see continue even as it pursues traditional channels, including branching into new markets.

As the largest U.S. bank, Chase serves half of all U.S. households. It was already a major factor in digital financial channels with 55 million digitally active customers. That equals about 69% of Chase customers who were digitally active as of fall 2020, an increase of three percentage points over fall 2019.

New accounts have generally come aboard as digitally active, according to Allison Beer, Head of Digital for Consumer and Community Banking at Chase. But additional growth has come from people who used the bank before digital channels had grown in popularity.

“About half of the customers who became digitally active during this period of time were over the age of 50,” says Beer in an interview with The Financial Brand. “They’ve been trying the digital tools for the first time and really liking it. Our net promoter scores among this segment of consumers have been very high.”

“We think these shifts are going to carry forward into 2021,” says Beer. “We’re going to be focused on personalization and making sure that the digital channels work really, really well for folks. We’ve taken big steps forward in 2020 and I think our strategy is on track. There’s nothing we’ve done this year that wasn’t on our roadmap. We only had to reprioritize some tasks to address some pain points earlier.”

At this point, says Beer, enhancements to the Chase consumer mobile app are generally on a two-week “sprint” cycle. The company has also maintained an ambitious schedule of new rollouts of digital products that Beer says were already on the drawing board.

Beer took on her current role in January 2020, just before COVID-19 hit the U.S. hard. She came into the digital job from the position of Head of Corporate Development for Banking and Payments, after coming to Chase in 2017 to head the payments area of the digital division.

She had originally hoped to meet her team live, but found herself working digitally herself in rounds of Zoom calls that almost seemed continuous at times. “I think we’ve come to know each other possibly better and more closely, by being in the ‘foxhole’ together,” says Beer.

Video Becoming a Way to Have a Chat with Chase

There’s an irony there because Beer says that while many Chase branches have remained open through much of the pandemic and many customers continue to want to seek live advice — albeit masked — the desire for “face-to-face” consultation via video has grown along with people’s desire for advice on other remote channels as well.

Some retail banking executives at other financial institutions have been skeptical about consumer acceptance of video-based advice, sometimes because they believe many consumers don’t want a stranger looking into their home remotely. Beer seems surprised when asked about this, because Chase has seen strong demand for it in this socially isolated time.

“I think the current environment is proving that perception wrong,” says Beer. “I think this environment is helping to break down old norms and old barriers. For those customers who don’t want to meet a person live, there are alternatives and one of them is video.”

The bank uses an outside service to make this option available to customers in multiple areas of the bank. In fact, it’s become such a common function that Chase doesn’t even have a brand-name for the service.

The range of requests people want to make over video connections varies from simple inquiries to more significant ones.

“We absolutely have people who are actively planning for retirement in the midst of COVID-19,” says Beer. “The world is still spinning on its axis, and they need to make annual plans.”

“Personal finances are a key concern for Americans this year,” even moreso than normally, according to Beer. “You can see it at a macro level, we hear it in our conversations with customers. So we’ve been working to provide customers with more tools to meet their needs.”

One priority was a next-generation version of Chase’s digital Credit Journey, which helps consumers track their credit scores and obtain financial advice related to their credit ratings. Add-ons for the Chase mobile banking app aimed at improving the experience with budgeting and goal-based savings were also introduced.

“There isn’t any part of the digital customer experience that we haven’t touched, really,” says Beer. This includes improvements to You Invest Trade, Chase’s self-directed digital securities trading service, and You Invest Portfolios, the bank’s robo-advisor tool.

Two major rollouts came in fall 2020, one for consumers and the other for small businesses:

• Chase First Banking, developed in conjunction with the fintech Greenlight, helps parents teach kids how to develop healthy spending and savings habits. The service provides them with a debit card and a special version of the Chase mobile app that enables parents to build in budgets, allowance, payments for chores and more. The intent is to put financial education within a family context in the realm where more and more spending is taking place — digital channels. 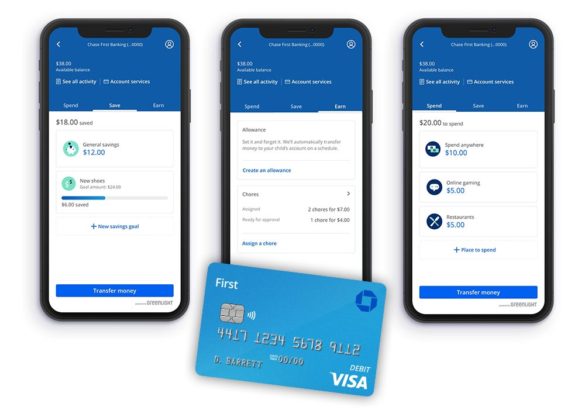 • Chase Business Complete Banking with QuickAccept. This is a new small business checking account built around mobile service and the ability to take card payments through data entry as well as through a portable contactless card reader about the size of a credit card. The card reader accepts payments and hands off the information to the user’s business mobile app using Bluetooth technology. Through the QuickAccept service, card payments can be drawn on the same day they are taken. The account also ties in other Chase business services, such as its Chase Ink purchasing card. Small businesses have adopted digital channels even more strongly than consumers have, according to Beer. 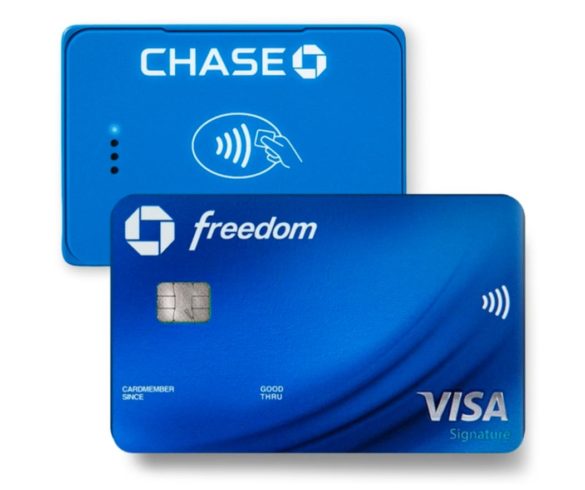 “This has been a really tough time for small business,” says Beer. “Managing cash flow is a huge priority for them all of the time, but especially right now.” In addition to the same-day availability features, and a flat-rate on card transactions, the new account provides multiple ways to obtain fee waivers and enables payments to be taken anywhere.

Keeping the Chase Eye on What Customers Want

“Time and again, customers share with us that they want convenience and we work to remove any friction that keeps customers from completing financial tasks,” says Beer. A priority now and going forward is accelerating improvements in the payments area.

“People want the ability to pay digitally and in real time,” says Beer, “and they want it to be safe.”

“Safe” has multiple meanings today, of course. There are COVID safety issues, like minimizing contact where possible. But there are also fraud issues, which, while not directly linked to coronavirus, have become an increasing possibility given growing use of ecommerce channels and digital payments.

Much comes down to consumer education and care. Many of the basic protections haven’t changed — beware of phishing emails, for example.

Fraud is a major cause for Beer and something she ponders frequently.

“The biggest chink in the armor from a security perspective is the behavior of individual customers,” says Beer. “Sometimes they think they are doing the right thing and then they find out they have been duped.” Providing more education and building in more layers of protection — which Beer declines to elaborate on to ensure confidentiality — are on Chase’s ongoing do list.

With COVID and fraud challenges constantly in the picture, Beer still makes time to consider how to improve the look, feel and functionality of digital channels.

“My inner consumer doesn’t look necessarily at financial services companies as our competitors, in that regard, but at big tech, retailers and new media companies like Netflix,” says Beer. She is impressed by the ease with which consumers can use their systems.

“I use them as inspiration for the ways that we can evolve our customers experiences,” says Beer. “So any time I have a delightful digital experience, says with Target or Allbirds, the shoe company, I’ll look at their customer experience, bring those insights to the team, and say, ‘Why don’t we replicate this?'”