Subscribe Now Get The Financial Brand's FREE Email Newsletter
Chatbots, virtual assistants, conversational AI … even the names are confusing. But these text- and voice-powered software options offer very real promise to improve the customer experience. It's not a quick process, however, as BofA's Erica journey has shown. Two experts help sort through the myths and realities and suggest best ways to implement this important retail banking channel.

Virtual assistants have now moved to the downslope of Gartner’s 2018 Hype Cycle for Emerging Technologies. That means the hype may be declining, but they’re still two to five years from reaching the “Plateau of Productivity,” the tech research firm predicts. That’s well ahead of autonomous flying vehicles and biochips. On the other hand, the “conversational AI platform,” a key component of virtual assistants and chatbots, remains on the upslope and is five to ten years from plateauing.

Should all but the largest financial institutions hit the pause button for a couple of years to let the dust settle?

Definitely not. For one thing, chatbots are already being used by banks, as demonstrated by Bank of America’s Erica, probably the best-known dedicated banking bot. Further, unless you’ve been asleep for the past five years, you’ve probably either used — or know someone who has used — Alexa, Siri, Google Home, or another voice-activated digital assistant. Pew Research Center reported last year that nearly half of U.S. adults say they now use digital assistants, mostly on their smartphones. These can be accessed by voice or text.

So hype or no hype, there’s no ignoring this fast-moving trend. For banking providers, chatbots and their more sophisticated iteration — conversational AI — have major implications. One of the most significant is the opportunity to improve customer experience.

“The time is now ripe for financial institutions to enhance the capabilities of chatbots to create a completely differentiated experience for their customers by combining knowledge across all relevant segments and providing better insights,” says PwC. “This will give rise to a new level of conversational banking where results are delivered instantly through real-time conversations.”

Read More: Meet 11 of the Most Interesting Chatbots in Banking

Despite the obvious potential, much confusion exists about chatbots and conversational AI, both of which are subsets of the much broader category of “Artificial Intelligence Software.”

Dan Latimore, SVP and Head of Banking at Celent, says that sloppiness in definition not only leads to confusion but tends to feed the hype cycle around AI.

“Many different terms get tossed around” in this category, Latimore noted. In comments during a webinar, Latimore walked through three categories of natural language applications using voice or text-based interaction — “chatbots,” “virtual assistants” and “conversational AI.” Some of the differences are subtle, but there is a clear progression of capability and sophistication. 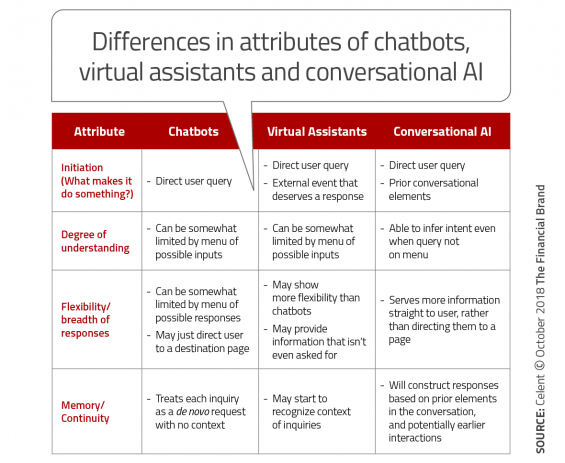 Myth No.1: Conversational AI is just like talking to a human. “It’s not,” said the Celent analyst. Thinking otherwise, he insisted, is “setting yourself up for failure.”

Even with advanced conversational AI, interactions can be stilted or inflexible and the frustrated user may terminate the conversation, said Latimore.

Conversations relating to banking are complicated, Latimore explained, and can be fraught with emotion — a person may start to curse using a virtual assistant, for example. In addition, the user may be a very high-value customer.

“You’ve got to have a process in place,” Latimore stressed, “to kick the conversation over to a human as seamlessly as possible, when necessary.”

Overall, the analyst observed, many banking-related conversations are not yet suitable for conversational AI. The simpler the conversation, generally speaking, the better, although he did say the technology is improving every month.

Myth No. 2: Conversational AI improves each time it interacts with a user. Not really, said Latimore. At least, not by itself.

“Interaction does create more data, and there is some machine learning built into conversational AI, but human experts still need to train and manage the application,” Latimore explained. “Just think of a Roomba [robot vacuum cleaner]. It goes along and then gets stuck under a chair and you have to give it a kick, and then it learns. AI is only going to be as good as the training that goes into it.”

Myth No. 3: Virtual assistants will take away human jobs. Not true, said Latimore. The technology will get rid of the most boring, repetitive tasks that humans do, he explained. But conversations that are fraught with emotion, on complicated subjects, or involve high-value customers requiring a nuanced approach are still going to require a human, Latimore believes. He noted that the artificial intelligence underlying virtual assistants and chatbots will enable humans to jump into conversations handed-off from a bot. The humans will be armed with lot more information.

Digibank, a standalone digital bank created by Singapore’s DBS Bank, attracted 1.5 million customers a year after its launch. Latimore cited the astounding fact that 82% of Digibank’s transactions were handled completely by conversational AI — mostly via text. Only 18% had to switch over to live chat.

The Celent analyst did point out, however, that the digital-only bank has a limited product set and that its customer base is digitally savvy. By contrast, when DBS offered the same digital capability to customers of its primary bank, about two thirds of the transactions had to go to the call center, according to Latimore.

“Still, if you can divert that number of calls via conversational AI, that’s pretty good,” the analyst said.

Latimore went on to describe his experiences with Erica, BofA’s mobile virtual assistant. He said the app has clearly made progress but is still “clunky” in some pretty basic areas. For example, Erica flubbed the routine query, “What was my biggest expense last month?” Instead of giving a specific answer it presented a long list — and not in size order.

Nevertheless, Latimore believes conversational AI is a key part of the next generation of digital interaction with banking customers. “It just has to be done carefully and judiciously.”

Two Ways to Improve Your Chances of Chatbot Success

Ben Terrill, Vice-President, Customer Success, of Finn AI, who spoke along with Latimore during the webinar, offered specific suggestions to banks and credit unions interested in developing, launching and improving a chatbot.

1. Take a long-term view. Often, banks and credit unions experiment with chatbots and get some easy wins, said Terrill. “They build a simple chatbot using a third-party toolkit and it responds well to about 30 questions. The mistake is thinking it will continue to go that easily. Typically what happens is that as you add more responses and capabilities to the bot, performance starts to drop off.”

When that happens, the financial institution has to go back and rebuild the taxonomy — which Terrill defined as “The categorization of natural language to determine what a user intends to do.”

Chatbots are a long-term project and take time to get right, he said. It will help if at the start you know where you want it to go so you can partner with the right provider.

2. Manage stakeholder expectations. Maybe your bot responds correctly to 95 questions out of 100. Is that good or defective? Terrill recommends banks and credit unions have early conversations with internal groups so that everybody’s on the same page and nobody says at the last minute, “Guys, we can’t launch this because it didn’t respond correctly to my question.” The launch is really an intermediary step, Terrill advised. “The bot will require a lot of data and a lot of human-generated text to improve over time and you’re really not going to get that until you put it in front of public users.”

1. Build seed data so you’re not starting from zero. Financial institutions can use call center data or chat data to help in “training” the chatbot. (For smaller financial institutions, Terrill said Finn AI primes the pump with a foundation layer of data.) “Once you’ve run the bot using that initial data you’ll have a good idea what parts of the bot are performing well and which poorly,” Terrill noted.

2. Improve Performance. Next, bring the poorly performing areas to a panel — an employee group that is incentivized specifically to train the bot in areas that are performing poorly by inputting additional “utterance data” (how people actually talk to the bank) to help in the nonperforming areas. You might do this with call-center staff, Terrill advised.

Terrill also recommended setting up an “employee socialization program to get knowledge in front of branch and call-center staff in this pre-launch stage.”

“They are going to be some of your best advocates,” he said.

3. Soft launch. This is where the bank or credit union puts the bot in front of a limited group of public users or internal staff to use. That, in turn, leads to the point where the bot is beginning to understand questions quite well.

4. Full public launch. At full launch, promote the chatbot on channels you own or to a select group of customers, said Terrill. Over time, use data about how people interact with the bot to inform further marketing.

Should You Name Your Chatbot?

Latimore and Terrill did not agree on the naming question.

The Celent analyst pointed out that giving a chatbot a name and personality creates a big splash — but it also increases the risk if things don’t go well. Bank of America launched Erica with a big media splash, but took more than a year before it officially launched the service, said Latimore. “Whereas if you start slowly and relatively quietly with an anonymous bot, the risk is less.”

“We’ve seen a customer have to discontinue a bot they’ve given a name to and it does feel a little morbid,” quipped Terrill. (Earlier this year Swedish bank Nordnet “terminated” its chatbot Amelia after about a year for being “ok, but not overwhelming.”) “However,” Terrill continued, “we’ve found in our research that personality is important with a bot and a name adds a little personality.”

Whatever personality a bank or credit union creates for its chatbot, said Terrill, it should reflect the overall brand. And the institution should revisit that personality every six months to be sure it’s on tone.