Subscribe Now Get The Financial Brand's FREE Email Newsletter
The digital consumer is at the forefront of change in the payments sector, with financial institutions and payments providers needing to quickly adapt to new methods of payment, changes in preferred experiences, and drivers of usage.

Forty percent of North American consumers have used their smartphones to make a payment at a merchant location, according to an Accenture survey of 4,000 consumers in the U.S. and Canada. This is a 150% increase from the 16% usage reported in a similar survey just two years ago.

“Moving forward, consumers will make choices about how to pay based on the nature of the transaction just as they always have. The difference is that they will have more payments instruments at their fingertips to choose from – literally.”

Other key findings on the evolution of payments include:

While still very modest compared to traditional forms of payments such as debit cards, credit cards, checks and cash, Accenture finds that consumer awareness and adoption of mobile payments has risen significantly compared to a similar Accenture survey conducted two years ago. Awareness of mobile payments has increased from 73% in 2012 to 84% today, with the overall frequency of use increasing by 25%.

Despite these positive trends there is still significant opportunity for growth. According to the study, “87% of survey respondents regularly use a smartphone, but of those who use one, only 45% use it as a mobile payments device. In addition, 41% of smartphone users do not think their phone is equipped with mobile payments technology.”

Apple’s integration of biometrics and tokenization may be of greatest importance, since consumers who have never used their mobile phone as a payment device in a merchant location (60%) state that the two reasons preventing them from doing so were security and privacy concerns.

Non-users are actually more concerned about mobile payments security than they were two years ago. In 2012, 45% said they were concerned about security compared to 57% today. Privacy concerns jumped from 37% to 45% during this same period, most likely as a result of recent credit card data breaches and malware attacks at major retailers. 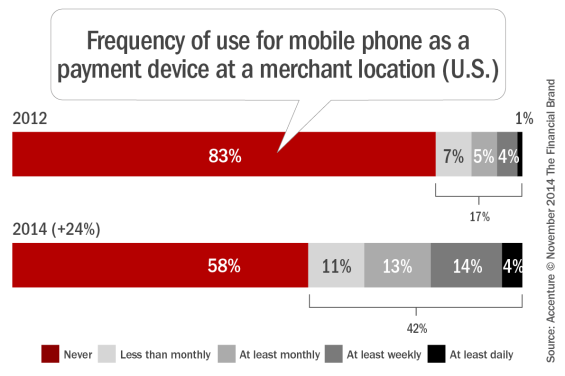 The Importance of the Millennial

Convincing Millennials of the benefits of mobile payments and digital currencies will be the key to future digital payment growth. Because of their first mover status and increasing wealth, this segment is critical for banks, merchants and payment processors.

“Unlocking the unique Millennial mindset – which can be elusive and complex – will be essential to building mobile payments usage among this highly digital demographic,” says the report. “The fundamental thing that payments players must remember is that this group is very different from their parents and grandparents.” 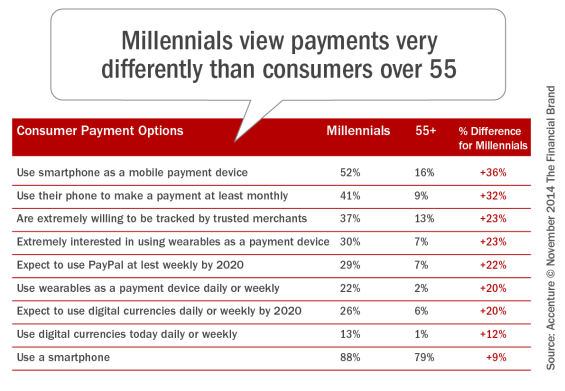 Beyond assuaging consumers’ worries about privacy and security and using the millennial segment to build momentum, Accenture found that incentives and offers can drive changes in payment behavior. This is consistent with other recent payment studies. Consumers want discount pricing and coupons based on past purchases (79%) and reward points (77%).

The research also found that 29% of consumers (and 37% of Millennials), are willing to have their location tracked by trusted merchants. In addition, real-time settlement was an important incentive, with just over half of mobile payments users stating that they would increase usage if faster transactions were possible. 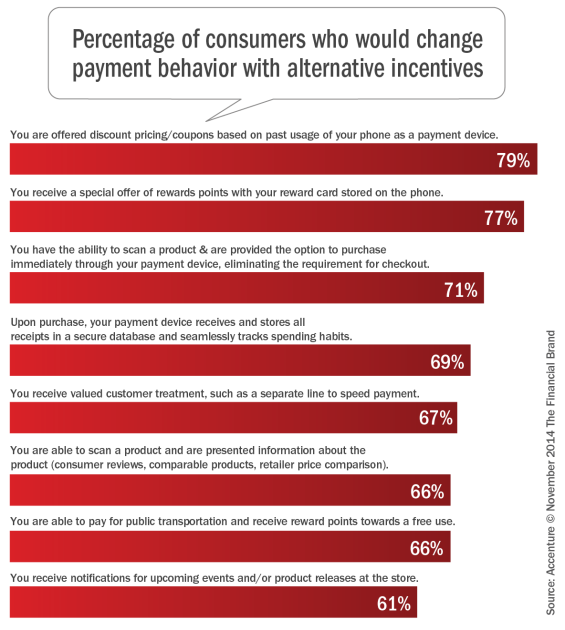 ‘My Pay. My Way. How Consumer Choice Will Shape the Future of Payments‘ published by Accenture is available for immediate download. Accenture designed and commissioned an online survey of consumers in the United States and Canada to identify current and future payment behaviors, which was conducted in August 2014. The 4,000 respondents included 3,400 from the United States and 600 from Canada, with an equal percentage of men and women.