Subscribe Now Get The Financial Brand's FREE Email Newsletter
The growing use of mobile devices to research, select, and purchase goods and services suggests that mobile account opening will soon become a key component of banks’ future acquisition strategies.

At a financial industry conference a few years ago, an Australian futurist by the name of Brett King suggested a framework for thinking about digital disruption. He said that such disruption follows a fairly consistent path: You start with a physical good sold in a physical store – think of an album sold in a record store. Then, you transition to that physical good (the album) being sold through a digital store (like Amazon.com). And finally, in some industries, you see digitization of the good itself – keeping with the music example, think of a consumer downloading a single song from an album on iTunes.

We have seen this pattern of digital disruption appear in the successes and failures of companies across a variety of industries – from film and television to news and information. And as Mr. King predicted, we are seeing it in the financial services industry as well. Specifically, we have seen a significant shift in the channels that consumers use to acquire new financial products. According to Mercator Advisory Group’s CustomerMonitor Survey Series (CMSS) 2015 Payments Survey, 31% of U.S. adult consumers submitted their last credit card application through a digital channel (inclusive of all online and mobile touchpoints). That is up from 28% in 2014, and is significantly higher than the 8% of consumers who applied in the branch in 2015.

Mobile is the New Storefront

In any discussion about digital disruption, it is important to think of the mobile channel as the tip of the spear. Just as consumers have migrated from physical stores to their computers in order to get a more convenient buying experience, so too has that desire for convenience led them from their computers to their smartphones and tablets.

This shift to m-commerce can readily be observed in the latest numbers being reported by leading retailers. According to an article in Time, almost 70% of Amazon.com shoppers placed orders using a mobile device during the 2015 holiday season. The company also reported that holiday shopping through its mobile app doubled in volume over the previous year. Similarly, Walmart announced that more than 70% of traffic to its website is now coming from mobile, and almost half of orders placed between Thanksgiving and December 1 of 2015 were placed using a mobile device.

The Buyer’s Journey is Migrating to Mobile

Mercator Advisory Group’s CMSS data suggests that this shift to mobile-centric purchasing is occurring in the financial industry as well. Between 2013 and 2014, the percentage of consumers opening financial accounts on mobile devices has been increasing steadily (from 3% to 7%), while more traditional account opening channels like the bank branch have started seeing declines. During the same interval, the percentage of consumers opening accounts in the branch declined by 5%. 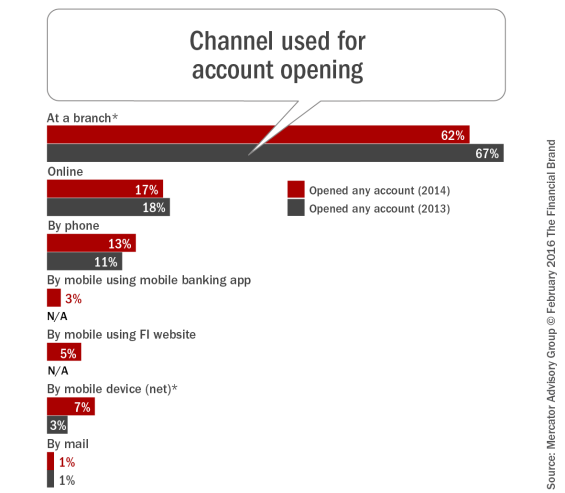 Given the massive growth of m-commerce in other industries, the growth that we have observed in mobile account opening might seem somewhat inconsequential. However, it is important to remember that, unlike Amazon and Walmart, most banks have not gone to great lengths to optimize their customers’ mobile shopping experiences. In fact, a majority of banks today do not offer mobile account opening. 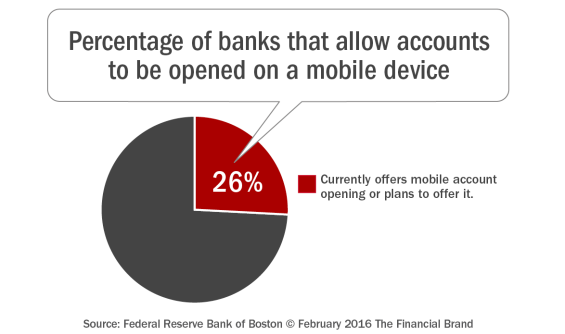 Recent surveys of bank executives have revealed remarkably consistent findings when it comes to the current state of mobile account opening. Approximately 75% of U.S. banks do not currently offer (or plan to offer) mobile account opening according to a survey conducted by the Federal Reserve Bank of Boston. Additionally, approximately 75% of global banks do not currently offer a fully digitized account onboarding experience (this term encompasses the entire account opening and onboarding process for online and mobile channels) according to a survey conducted by Oracle Financial Services.

Whichever way you slice it, it’s clear that there is significant selection bias among banks in favor of traditional account opening channels like the branch, and against emerging channels, like mobile.

The legacy account opening process in place at many banks today is the result of a lot of collaboration and compromise between different departments and company stakeholders. Pulling together folks from diverse teams – marketing, risk, compliance, products, channels – and reaching a consensus on something as important as account opening is an arduous undertaking. It’s a process that many bankers will try to avoid repeating, even if that means transplanting an account opening process designed for the branch into digital channels.

However, there comes a time when the costs of shoehorning a legacy process or system into a new customer use case exceed the costs of redesigning those systems and processes. The time is rapidly approaching where mobile account opening becomes table stakes for success.

Designing an optimal mobile account opening process is a multidimensional challenge. Every part of the account opening process, from the initial application entry to the back-end identity verification and risk decisioning, needs to be optimized to deliver a simple, real-time mobile commerce experience that also satisfies a financial institutions’ risk mitigation and compliance requirements.

Thankfully, there is a multitude of third-party vendors already focused on helping banks enable mobile account opening. Some of these vendors provide holistic solutions that combine multiple capabilities at a single, bundled investment. These holistic solutions are a good option for banks that aren’t interested in assembling a custom solution.

For banks and credit unions that are comfortable with “some assembly required,” there is the ability to use a flexible decisioning technology foundation that can be quickly configured and allows easy swapping different mobile account opening capabilities in and out via application programming interfaces (APIs). This flexibility will empower institutions to experiment with different mobile account opening vendors to get a more accurate understanding of the value of those vendors’ products.

Mercator Advisory Group has compiled a “periodic table” of select MAO solution providers across a range of important categories whose solutions could be combined into a comprehensive mobile account opening process. The MAO periodic table illustrates a broad range of different elements but, unlike the real periodic table, it is not comprehensive and it is constantly changing. 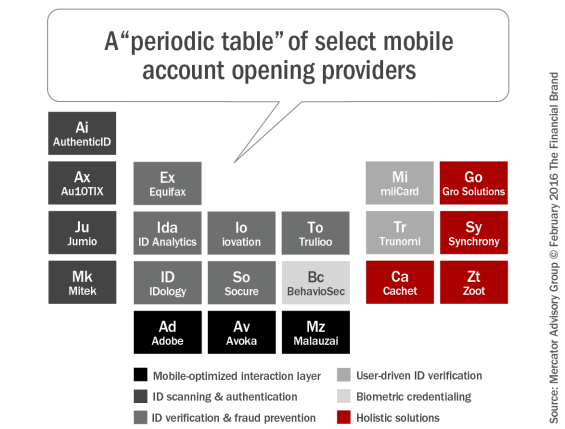 The easiest and most convenient path between consumers and the financial products and experiences that they want is the mobile channel. Mobile devices have already become the predominant way for consumers to interact with financial institutions – for everything from remote deposit capture and photo bill-pay to mobile payments and ATM prestaging. Focusing on the mobile consumer experience can increase satisfaction while decreasing costs as more steps are digitized.

It is expected that the mobile operating system (with all of its unique advantages and constraints) will eventually become the primary development environment for all consumer-facing and employee-facing bank capabilities, including account opening. Thanks to the variety of mobile account opening capabilities and vendors in the market, financial institutions have no shortage of options for delivering compelling mobile account opening experiences to their customers. The question is when they will choose to adjust to this new normal.

Mercator Advisory Group’s research report, Mobile Account Opening: Adjusting to a New Normal explores the trends driving interest in mobile account opening and provides a detailed guide for redesigning the account opening process. It also profiles leading vendors (named in the “periodic table”) for each of the solution layers required for mobile account opening. The report is available for purchase.