Subscribe Now Get The Financial Brand's FREE Email Newsletter
Despite exponential growth in mobile usage by all consumer segments, and increasing acceptance of mobile shopping and mobile banking, banks and credit unions continue to offer only slightly more than the basics. In addition, research indicates most organizations lack an overarching plan for mobile success, reverting to a passive implementation mentality.

According to ComScore’s latest U.S. Mobile App Report, mobile usage in the U.S. increased by 52 percent since last year. In fact, mobile usage has increased to become the leading digital platform, with total activity on smartphones and tablets accounting for an astounding 60 percent of digital media time spent in the U.S.

Last year, the majority of digital consumers in the U.S. used both desktop and mobile devices every month. In addition, mobile surpassed desktop for the first time in terms of total digital media engagement. And now, the majority of all digital media time spent occurs on mobile apps. Interestingly, the high level of dependency on apps has occurred despite the fact that users have all but ignored downloading new apps in favor of the ones they’ve already downloaded.

Mobile banking logins exceeded online logins for the first time late in 2013 according to a report from Aite Group entitled, ‘Activity-Based Marketing: The Future of Mobile Marketing in Banking.’ More importantly, Aite found that close to 50 percent of smartphone owners in the U.S. made at least one mobile payment transaction, 40 percent made a purchase in a physical store using their smartphone, and 45 percent of smartphone owners used their mobile device to transfer money to another person.

As noted in several studies, shopping using a mobile device has also skyrocketed over the past couple years as consumers compare prices while in a store (‘showrooming’), store loyalty cards on their phone, are engaged in bank-based or retail-based coupon or offer programs and even receive receipts via email.

So how are banks and credit unions responding to the growth in mobile use and the increasing acceptance of a mobile device as a shopping tool? While a lot of attention gets paid to the ‘sizzle’ of mobile banking applications, it is clear that a great deal of attention is being paid to offering the basics of mobile banking. And while there is definitely a lack of organizations that offer mobile banking applications for checking accounts and loans as well as basic Personal Financial Management functions, it is on the priority list for the majority of institutions. 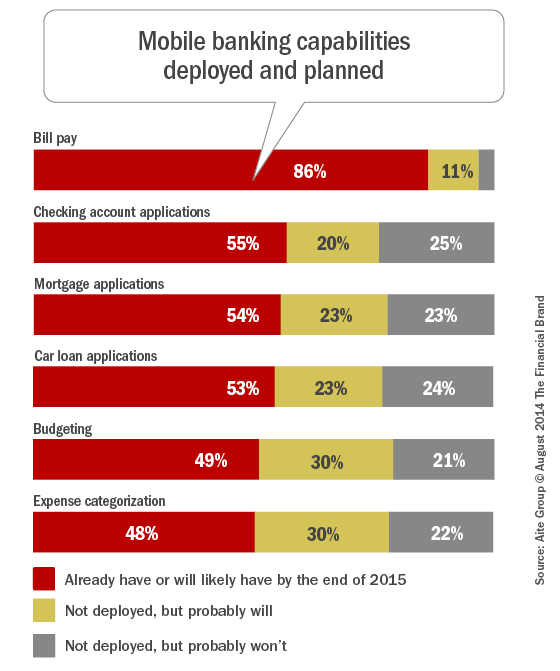 While the ‘basics’ seem to be covered, expanded mobile shopping capabilities fall further down the list of priorities for most organizations. Purchase receipts are the highest priority through 2015 for those firms surveyed, with the ability to help facilitate home and car purchases, compare rates and fees, and provide merchant-funded rewards expected to get increased attention. Money management tools, however, stay on the back burner … at least for now according to the Aite report.

Aite also found that about half of the organizations surveyed expected to bundle all of their features in a single app, while 20 percent would offer standalone apps and 30 percent either didn’t have a defined approach or weren’t sure. Even a higher percentage of institutions lacked a defined approach with regards to deployment across devices (smartphones vs. tablets). 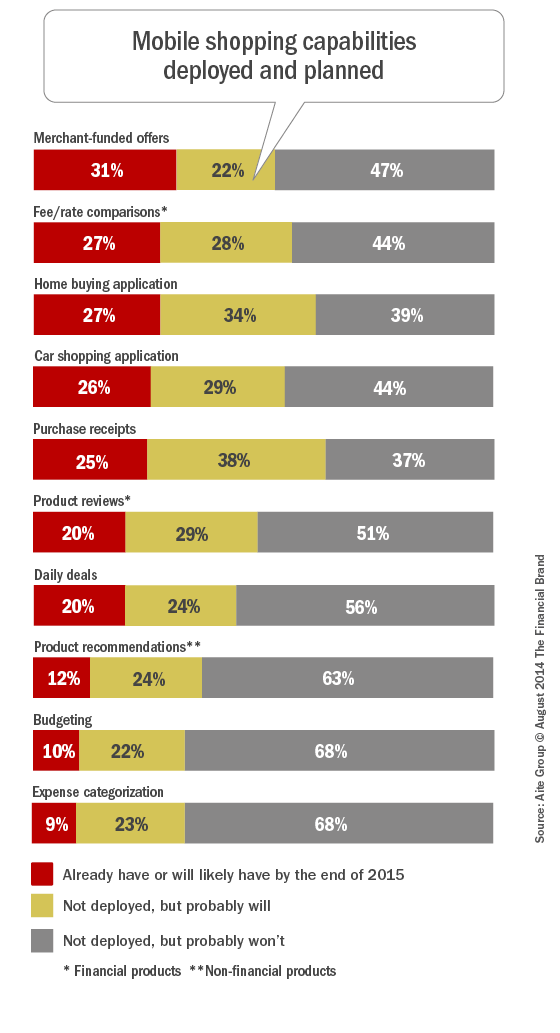 As could be expected, plans for expanded mobile banking functionality vary by size of organization. As shown below, the largest organizations ($10+ billion in assets) are more than twice as likely to offer expanded mobile shopping applications in 2015 compared to smaller organizations. As mentioned in other studies during the past year, mid-sized organizations are lagging the development efforts of the smallest institutions.

This trend has been attributed to the fact that many of the smallest organizations have willingly partnered with 3rd party service providers who can get applications to market faster and cheaper than developing the apps internally. 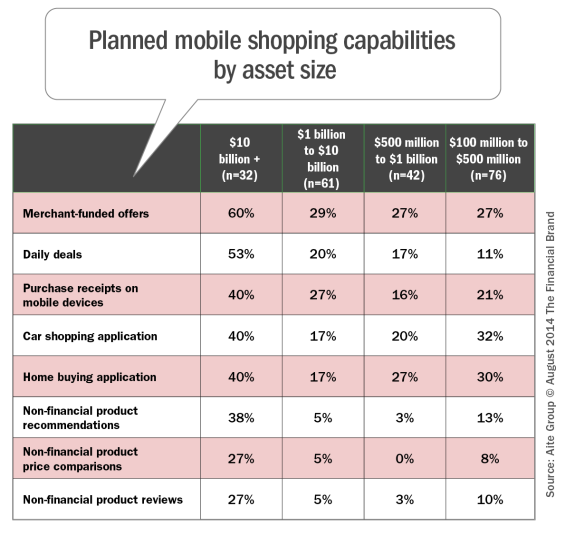 Not having a defined plan for deployment of new mobile banking and mobile shopping applications is unacceptable regardless of the size of institution. Even more unacceptable is not having a strategy for differentiating (or not differentiating) mobile and tablet device applications given the almost universal usage of both devices by the highly sought after digital and mass affluent consumer.

To effectively keep pace with the demands of the mobile consumer, institutions need to determine where they want to be on the spectrum of being a ‘Digital Bank.’ There is no single perfect answer, since each organization has their own unique competitive set, internal strengths and weaknesses and customer/member base. ‘Following the herd’ or taking a ‘wait and see’ approach could be a road to disaster in an industry being impacted by increased consumer demands and expanded competitive options.

Going forward, poorly planned mobile strategies will also impact other areas of the organization such as marketing, where mobile insights are quickly becoming a competitive differentiator. As activity-based marketing emerges, those organizations without a defined mobile application and mobile device strategy will be left behind.