Subscribe Now Get The Financial Brand's FREE Email Newsletter
After a period of relative stability, the primary bank switching rate jumped by more than 40 percent in late 2013, with 60 percent of smartphone/tablet users reporting mobile banking capabilities as being either "important" or "extremely important" in their decision to switch.

After relatively stable switching rates since the financial crisis, the number of consumers switching primary banks jumped from 7.1% in the first half of 2013 to 10% in the fourth quarter of 2013 according to AlixPartners. This is the highest rate of switching since the end of 2008.

The highest incidence of primary bank switching was evident among millennials, where the annual switch rate approached 20 percent. The rate of switching quickly drops for older segments of the population, with baby boomers and seniors switching primary banks at low single figure annual rates. 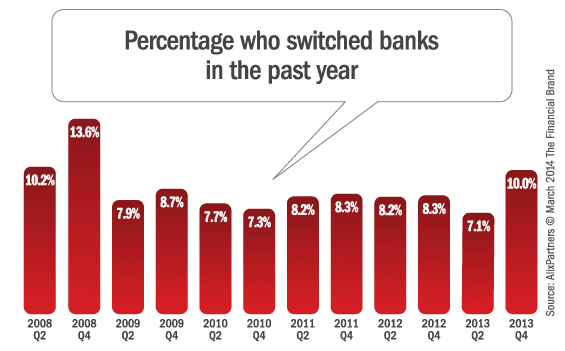 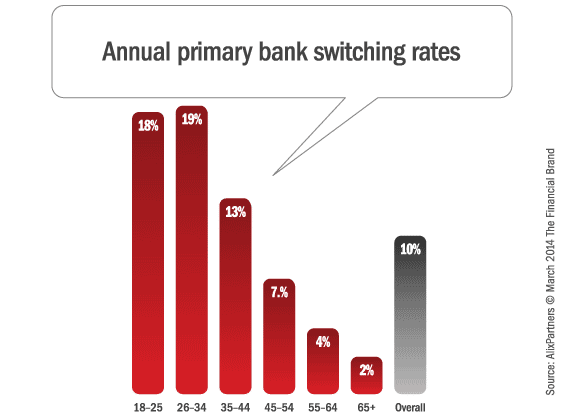 Among younger consumers, technology and innovation was of greatest importance, with the reasons for switching primary banks including:

For older consumers, the primary reasons for switching were because of a bad customer experience or because of a move, new job, etc.

Impact of Mobile Banking on Decision to Switch

Mobile banking is playing an increasingly important role in primary bank switching decisions, with 60 percent of smartphone and tablet users reporting that mobile banking capabilities are “important” or “extremely important” in the decision to switch. This compared to an already high 48 percent in a similar survey in the first half of 2013.

“The availability of mobile banking features plays an increasingly critical role in the consumer’s decision to switch primary banks,” according to Bob Hedges, managing director in AlixPartners’ Financial Services Practice. “Consumers are demanding, expecting, and shopping for mobile capabilities. Banks who fail to innovate run the risk of losing customers and face real challenges in attracting new customers.” 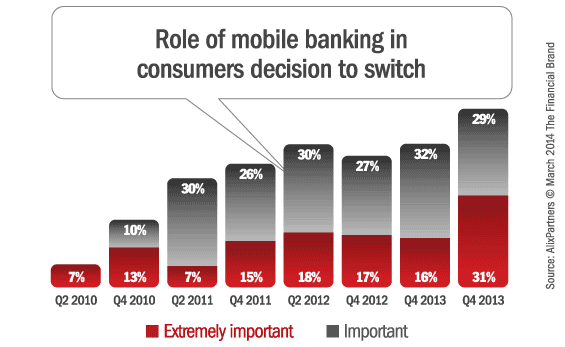 The importance of mobile banking capabilities in the decision to switch banks correlates with a strong growth in adoption of mobile services overall. According to the AlixPartners study, mobile banking is being used by 28 percent of U.S. banking consumers, up four percentage points from the survey in the first half of 2013, and up nine percentage points from the end of 2012.

As penetration of smartphones and tablet continue to rise and consumer adoption of mobile banking increases, the consumer’s use of higher cost banking channels, such as traditional branches and live customer service call centers, appears to be declining. According to the study, mobile banking users reported visiting a bank branch 39 percent fewer times per month after adopting mobile banking services.

“The behavior and decision making of consumers who have adopted mobile is making the business case for mobile innovation and promotion by financial services institutions,” added Hedges.

Digital Engagement Extends to Account Opening and Service Use

Consumer engagement with smartphones and other digital channels goes beyond the decision to switch primary banks. According to AlixPartners, 51 percent of younger switchers used online or telephone channels to open their new account in the second half of 2013, with only 35 percent using the branch for the entire account opening process (compared to 46 percent in the first half of 2013).

“Given today’s margin-compressed environment, it becomes critical for financial services providers to address mobile-oriented consumers — who prefer lower cost-to-serve channels and have a more attractive financial profile,” said Teresa Epperson, managing director in the Financial Services Practice at AlixPartners. “Our research continues to highlight the attractiveness of consumers who use mobile services and the importance for banks to focus on attracting and retaining those consumers.”

Further spotlighting the importance of digital innovation, mobile remote deposit capture (RDC) adoption is also growing steadily, with 22 percent of smartphone/tablet owners using the service compared to 18 percent in the first half of 2013. These users tend to be younger, wealthier and use more services at their primary bank than non-adopters.

“We will increasingly see banks developing and rolling out capabilities aimed at addressing specific consumer pain points and opportunities to add value. If mobile RDC is viewed as the current ‘big attraction’ in the ongoing wave of industry innovations on behalf of consumers, mobile photo bill pay could be the next big thing,” says Epperson. “In the fourth quarter of 2013, 28 percent of consumers between the ages of 26 and 34 reported themselves to be likely to change banks to gain access to mobile photo bill pay,” continued Epperson.

The Future of Digital Banking

All recent research studies point to a future of increasing mobile banking use and engagement. As sales of more technologically advanced mobile devices increase, consumers will become more comfortable with new applications that simplify daily life and provide tangible benefits.

“Those financial services providers that focus on mobile offerings as competitive differentiators will be winners in the future.”
— Bob Hedges, AlixPartners

In the future, consumers’ mobile banking behavior and expectations will evolve rapidly. As a result, banks and credit unions will need to recognize the importance of rapid development and deployment cycles for mobile offerings in response to these expectations and understand that other industries, such as retail, may be setting the standard for new mobile offerings.