Subscribe Now Get The Financial Brand's FREE Email Newsletter
According to several reports, Apple is gearing up to roll out a new payments system for physical goods and services beyond the walls of it's Apple stores. If true, Apple would leverage the iTunes payments system, credit card data already on file for more than a half million consumers, and recent patents to become a big player overnight. How will banks or credit unions respond?

A report claims that Apple’s senior vice president of Internet Software and Services, Eddy Cue, “has met with industry executives to discuss Apple’s interest in handling payments for physical goods and services on its devices, according to people familiar with the situation.” The paper also said that online store boss Jennifer Bailey has been re-assigned to a new role where she’s tasked with growing a payment service at Apple.

According to the Wall Street Journal, Apple also spoke to at least five other well-known executives in the payment industry about the position before tapping Ms. Bailey.

These moves come just months after Apple installed new iBeacon payments technology in their stores and allowed for the payment of smaller ticket store items using the iPhone app and without the need to interact with a store employee.

Obviously, if Apple does enter the mobile payments space, they would not be alone. Mobile payments is a highly competitive industry which has yet to develop a uniform standard due to the lack of tangible benefits to the consumer, the processor and the merchant. This hasn’t deterred the likes of PayPal, Google, Square, Stripe, Visa, Mastercard and American Express from developing their own mobile payment platforms however.

While a solution from Apple may not require major changes from the customer or merchant as NFC or EMV does, Apple would still need to improve their position as a ‘trusted payments partner’ beyond what was found in a 2011 Oglivy and Mather’s Mobile Shopper survey shown below. 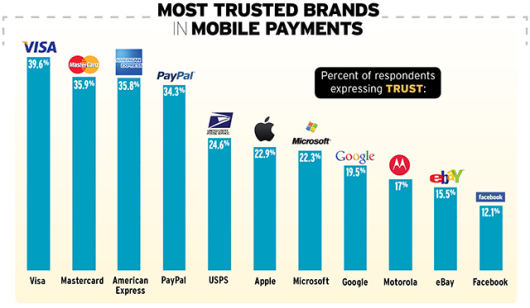 According to Denee Carrington, analyst at Forrester Research, “Apple is absolutely the sleeping giant in the payments world. They have the capability… they just haven’t tied it all together.”

Why would Apple enter the mobile payments battlefield?

First of all, mobile payments is BIG business. According to Forrester Research, 31% of US online consumers who own a mobile phone are interested in or already use mobile payments for in-store purchases, up from 18% in 2011. However, while 61% of US consumers have heard of a digital wallet, only 11% use one.

But that is expected to change. Americans are expected to spend $90 billion through mobile payments by 2017, up from $12.8 billion in 2012, according to Forrester.

Secondly, current payments infrastructure is outdated. As can be seen from the recent data hacking done at Target, Neiman Marcus, Michael’s and probably elsewhere, debit and credit cards are inherently insecure. And since most cards in the U.S. still use outdated magnetic stripes as opposed to EMV technology, personal data is relatively easy to steal.

Thirdly, each card in your wallet represents access to an account without real time insight or interface. A mobile-first payment application similar to what is offered by progressive financial institutions like Moven, Simple, and several banks overseas is a much better way to make payments. They allow you to see what is happening with your account in real time, provide instantaneous receipts, allow for interactive money management and have the potential to be more secure.

Lastly, similar to what banks do today, processing payments with a mobile device could enable Apple to charge a nominal processing fee, but more importantly, gather deep payments and behavioral data from customers and build even more brand loyalty.

For anyone who has been following Apple through the years, it should come as no surprise that Apple has a number of advantages already in place should they decide to enter the hyper-competitive payments space. A short review of these advantages include: 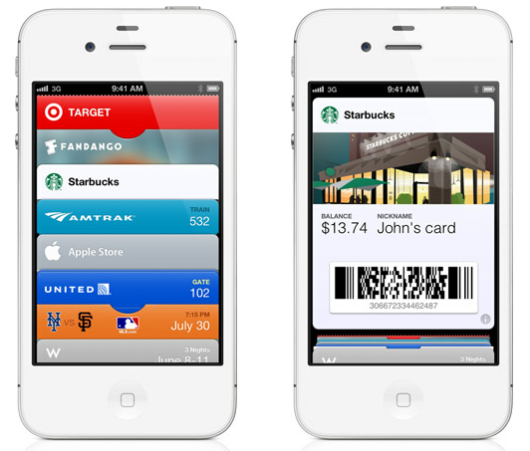 As you can see, Apple has a vast array of the pieces to the payments puzzle, but they have yet to be put together as a complete picture. How big of a leap is it for Apple to develop a viable mobile payments solution?

“The Apple ‘wallet’ has already been released in the form of Passbook,” says Deva Annamalai, bank marketing technologist out of Salt Lake City. “Once you start using Passbook, you get hooked on how easy it is to pay for Starbucks, get your boarding passes, movie tickets, and even alerts when you spend. You wonder why every other service you use is not integrated to passbook.”

Annamalai goes on to say, “If you can pay for your coffee using a Starbucks prepaid using passbook, how hard would it be to hook up a similar scheme with the iTunes card on file? With BLE providing the offers and loyalty rails, this space is going to get interesting … and crowded.”

When asked about Apple’s potential for success, Sam Maul, Managing Consultant for Carlisle and Gallagher Consulting Group, Inc. said, “Steve Jobs once stated ‘Details matter so it’s worth waiting to get it right.’ This has never been more applicable than in entering the payments arena. Multiple contenders have tried to crack this space with varying degrees of mild success. Do I believe Apple can (finally) convince consumers to trust, and more importantly adopt mobile payments? I’ll let Apple answer that: ‘Here’s to the crazy ones…. the people who are crazy enough to think they can change the world, are the ones who do.’ As an Apple fanboy let me state – About damn time!”

What Are The Mobile Wallet Strategy Options

To date, the majority of financial institutions have followed a ‘wait and see’ strategy when it comes to mobile wallets (assuming a formal strategy has been set at all). Given the potential move by Apple and others over the past 12 months, it is definitely time to for banks and credit unions to develop a road map for the future along with a timeline for implementation.

With many of the first movers in payments and mobile wallets having tested a variety of options, it is expected that we will now begin to see ‘fast followers’ use the learnings of the past to double down their efforts in the space. Apple is a good example of an organization that has watched and learned from what others have done.

Consumers may also quickly start to accept mobile payments as smartphone adoption continues to increase, offerings improve from the perspective of both the end consumer and merchant, and security issues are addressed.

The question is whether financial institutions will leverage the trust and insight they already have into customer demographics, financial holdings and payment behavior? Banks and credit unions also have the ability to provide either bank-based and/or merchant-funded rewards based on buying patterns.

According to a recent Forrester research report entitled, “Craft the Right Digital Strategy for Your Financial Institution“, there are four broad options available to financial institutions as they craft their digital wallet strategy. Banks and credit unions can select one or multiple approaches as they prepare for the future.

While the news of a potential Apple payments solution may not have been a surprise to anyone following the payments industry, it is clear that Apple is in an enviable position to be a dominant player in mobile payments in the U.S. and in other markets around the world. In addition to scalability, Apple also has a preferred demographic of higher income, digitally engaged customers. This certainly won’t hurt them when/if they reach out to retailers.

But Apple has already demonstrated a willingness to wait for the right time to introduce any new innovation. And, while all the pieces seem to be in place for Apple to make a payments play (including consumer anguish around card payments as a result of the Target data breach), Apple still needs to address what has kept people from making payments with their phone in the past — security, trust and a value beyond what they are getting from using plastic today.

According to Bradley Leimer, vice president of digital strategy at Mechanics Bank, “Apple doesn’t have to become a payments player to disrupt payments. Just as it’s now iconic iTunes Store has disrupted both music and movie consumption forever, the addition of Passbook and BLE has initiated a challenge to the way the average person will soon pay for goods and services. With six hundred million active accounts attached to a payment card, Apple has a head start on Amazon and most of the payment players. Banks should be watching their payment revenue stream as it’s likely to disappear as quickly as Blockbuster.”

As mentioned above, the worst strategy is to sit on the sidelines as financial and non-financial competitors continue to play more aggressively. Like a game of payments roulette, you can’t win if you don’t play. Using the same analogy, it may make sense to place bets on multiple options, realizing that while some of your bets may not pan out, the potential to have a ‘big win’ improves.

When CEO/founder of Moven, Brett King, was asked about the potential for Apple entering the payments business, he said, “The era of the downloadable bank account is upon us, and any banker that still thinks opening an account in a branch is the right idea needs their head examined!

After the Wall Street Journal report discussed above, Apple Chief Executive Tim Cook was asked about mobile payments by an analyst on a conference call. At that time, he talked up the company’s potential for doing more in this area. Without giving much detail, Cook alluded to the fact that Apple could leverage its fingerprint scanning technology for payments beyond their Apple stores.

“We are seeing that people love being able to buy content, whether it’s music or movies or books, from their iPhone using Touch ID. It’s incredibly simple and easy and elegant and it’s clear there’s a lot of opportunity there. The mobile payment area in general is one that we’ve been intrigued with. That was one of the thoughts behind Touch ID. … You can tell by looking at the demographics of our customers and the amount of commerce that goes through iOS devices versus the competition that it’s a big opportunity.”

This is the first time anyone at Apple has publically acknowledged the potential of Apple entering the payments space. In fact, last year Cook told investors that mobile-payment technology was “in its infancy.”