Why did U.S. consumers rank Citizen’s Bank highest? And what three critical areas do several banks need to improve in?

What do consumers think of banks’ mobile banking apps? It’s easy enough to find out. Just pop on the Apple App Store and the Google Play Store, where you can look at customer ratings and reviews.

That’s precisely what Xtreme Labs did. They analyzed hundreds of consumer comments about the mobile capabilities of the top 53 U.S. banks (as ranked by total assets), then issued a report ranking the best and worst banking apps in the industry.

When looking at the top 15 banks ranked by most assets, Android outperforms iOS apps in terms of overall ratings, whereas banks generally develop more on the iOS platform. 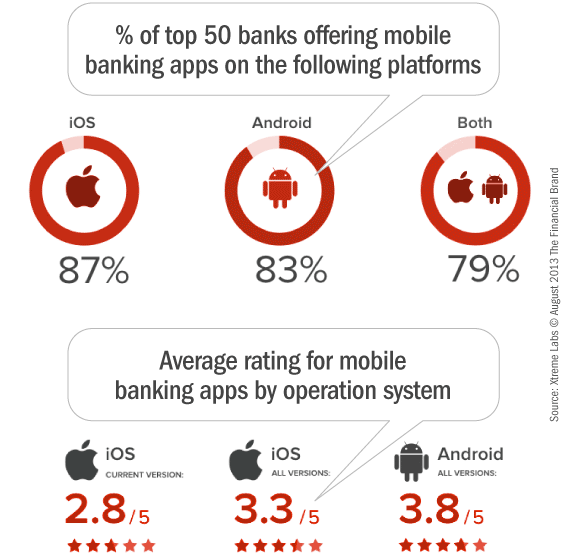 Citizen’s Bank is the only bank with the highest rated apps on both Android (4.5 stars) and iOS (4.5 stars) platforms.

Common accolades for top ranking apps are for its frequent updates, specific bug fixes according to customer feedback, and ease of use with users often describing the app as “everything you need” in a mobile app for “someone on the go.”

PNC Financial Services Group and BOK Financial Corporation have rolled out the most U.S. mobile offerings, with 7 and 14 apps respectively.

The lowest-rated Android apps was M&T Bank, with 2.3 stars and 63% negative reviews.

Common complaints for low-ranking apps include the fact that critical functionality such as the dashboard loading properly does not work and that the app is merely a link to the mobile website. Other issues include applications crashing and freezing, frequent error messages and issues with connectivity, opening, and loading. The lacking functionality is a source of significant frustration and thus a deterrent for overall usage.

Read More: Consumers Expect More From Mobile Banking Apps Than They Get

According to Xtreme Labs, one in six consumers who switched banks indicated a poor mobile banking experience prompted the switch. Between 51% and 76% of mobile users want to use their device to call customer service, check balances, transfer money, pay bills, and look up branch locations and hours. But only one-half of consumers using mobile banking report that they fully understand the capability of the technology, representing an opportunity for banks to educate their customers, increase usage and potentially deepen customer share of wallet

“The trailblazers in the banking industry are truly differentiating themselves by delivering the mobile experience their customers are literally asking for – it’s really that simple.”
— Mike Stern, Xtreme Labs

“A poor mobile banking experience can be the single factor for a bank to lose a customer,” cautions Mike Stern, Director of Business Development at Xtreme Labs. “It’s surprising to see that there is a significant opportunity for top banks in the U.S. to improve their mobile offerings when it comes to user experience and application functionality.”

The Xtreme Labs study was conducted from May 18 to June 25, 2013. The report aggregated publicly available consumer ratings in both the Apple App Store and Google Play Store and listed those results, as well as top complaints based on consumer comments. Data for the current version of each app was used for iOS if there were reviews and ratings available for the current version, otherwise data from all versions was used.

You can download the complete 62-page PDF report, “The U.S. Banking Apps Report: Customer Reviews,” at the Xtreme Labs website. It’s free, and well worth filling out the simple registration form to get. You won’t be disappointed with the raw data it contains.