Subscribe Now Get The Financial Brand's FREE Email Newsletter
As banks and credit unions begin strategic planning for 2015, it is helpful to have statistics to help form a view of current market trends. No place is this more important than with digital banking and mobile payments, where technology, adoption and competition is changing faster than ever.

The relationship between financial institutions and consumers is rapidly changing, with interactions increasingly occurring on mobile devices, in real time, with contextual benefits. While branches and traditional products and services still are desired by many consumers, financial institutions hoping to reduce costs, improve the customer experience and provide the services required by digital consumers can’t ignore mobile and digital trends.

As most banks and credit unions are beginning their 2015 strategic planning process, the importance of understanding consumer trends, technology advancements and competitive changes in mobile banking and mobile payments is the foundation for making the right strategic and tactical decisions for the future. A great source of mobile trends, statistics and opinions on the impact of digital banking can be found in the Monitise report, The Mobile Money Landscape: Market Statistics and Expert Views. This report provides over 300 perspectives on global mobile use and when and where consumers are most likely to buy, bank and pay with their mobile devices.

In this report, those involved in the strategic planning process can find:

To set the stage for the report, here are 7 fast facts that illustrate the dynamic nature that mobile plays in banking and commerce.


Rather than review all of the statistics included in the Monitise report, here are some of the insights that should be the foundation for 2015 planning efforts.

Despite all of the discussion around the growth of mobile banking, banks and credit unions can’t ignore other very active channels used by consumers. There is still a significant percentage of consumers that only access their financial relationship through online banking while a surprising percentage of households still regularly visit the branch.

In 2015, it is recommended that a greater effort be made in branches to educate consumers on the benefit of mobile banking and to convert online banking customers to mobile as well. One way to alleviate the ‘step-by-step channel migration process is to follow the lead of institutions that are allowing consumers to have a mobile banking relationship without online banking. 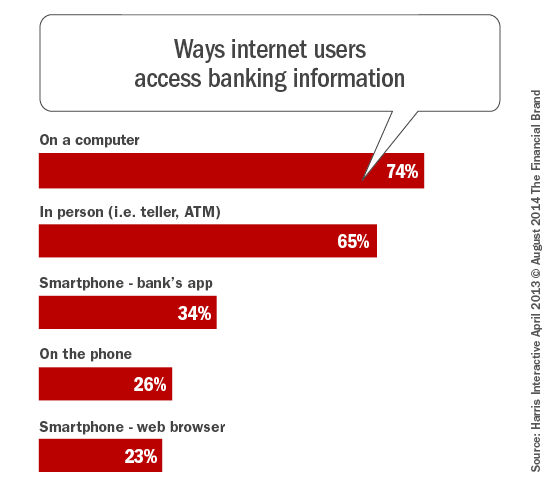 Despite tremendous efforts from banks and credit unions,  the primary activity performed by mobile bankers continues to be the checking of balances or recent activity.  To achieve the level of engagement necessary to fend off non-bank competitors (or the competitor down the street), organizations will need to focus efforts on having customers and members make deposits, make payments and transfer money more regularly in 2015. 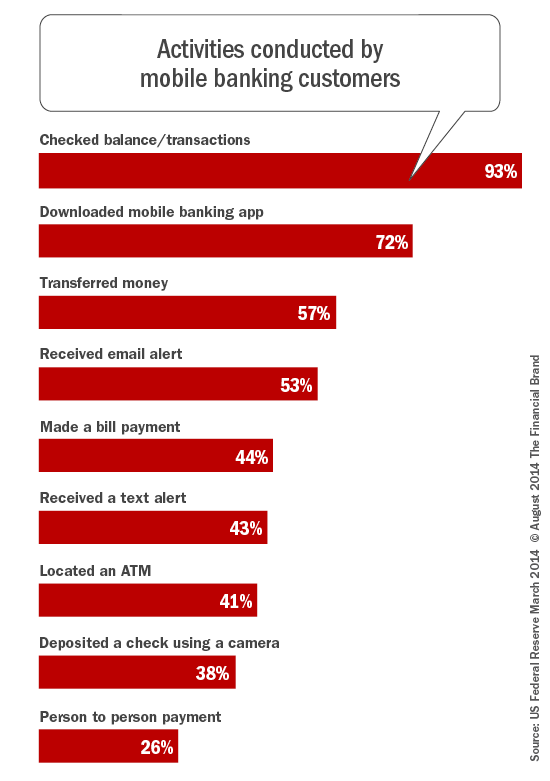 There is no doubt that the adoption of mobile banking is correlated with age similar to the adoption of mobile devices and technology in general. Interestingly, the age segment with the second highest growth in adoption (by %) is the 55-64 age category. As planning begins for 2015, organizations should consider age specific communication to further stimulate usage in Boomer and Senior age categories. 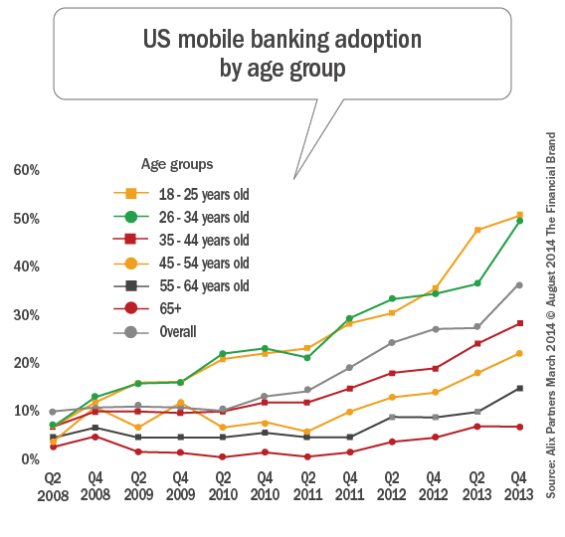 While many research studies combine smartphone and tablet users under the category of ‘mobile banking’, the demographic characteristics of the tablet users differ significantly from those of the typical smartphone bankers. Not only is the tablet user older, they also have deeper existing relationships with their financial institution and are more likely to be a highly sought after mass affluent or high affluent consumer.

As strategic plans for 2015 are being developed, more focus should be spent on building unique tablet applications that provide a deeper money management capability and more tactile interactive capabilities. 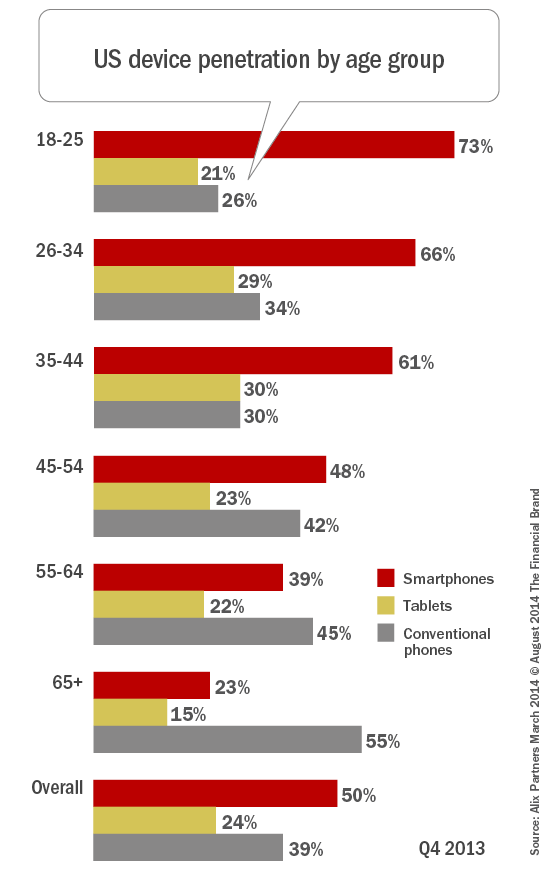 Tremendous Disparity Remains Between Awareness and Usage in Mobile Wallets

“To know me is to love me” may be a popular phrase, but definitely isn’t the foundation for mobile wallet usage. Despite significant awareness of primary mobile payment applications, in most cases, the usage levels lag awareness by as much as 4 or 5 to 1. While some may see this gap as an opportunity, others view this as a risk caused by consumer concerns around fraud, privacy and even the value of mobile payments.

As we approach 2015, a great deal more effort will be needed to familiarize consumers about the benefits of mobile payments. With a strong value proposition that is understood and accepted by consumers, mobile payments will continue to lag other developed countries. 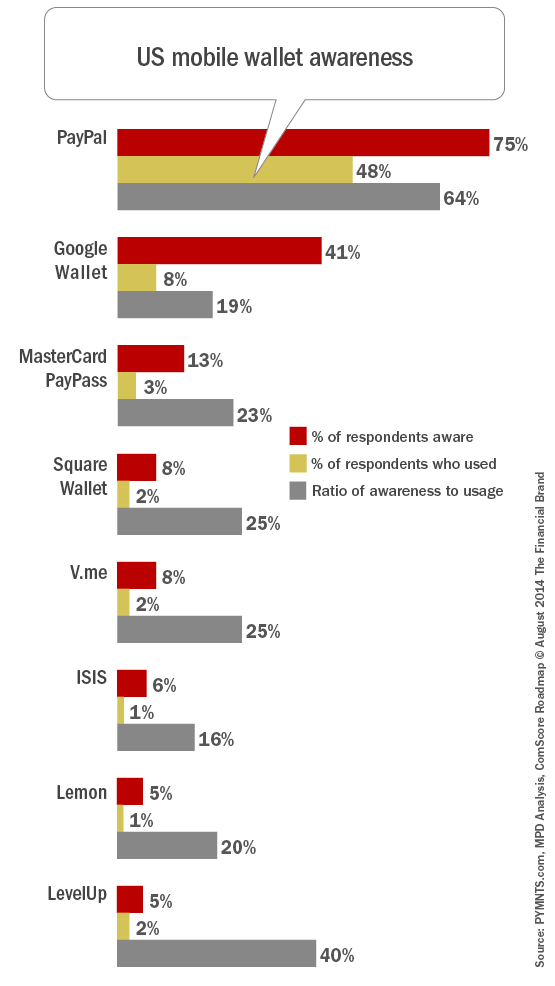 Further emphasizing the challenge in generating mobile payment acceptance is that 56% of consumers would only be interested in mobile payments if they were ‘free.’ Other research reports paint an even bleaker picture, with interest in mobile payments being viewed as unnecessary due to the relatively acceptable process of paying with plastic.

Waiting on the sideline and hoping a mobile payments ‘winner’ emerges is not a recommended course of action for 2015. Instead, banks and credit unions should prepare for new payment alternatives and should consider partnering with one or several of the mobile payment providers already impacting the market. While some consider this a game of ‘mobile payments roulette,’ it is a better alternative than being left behind as mobile payments begin to gain momentum. 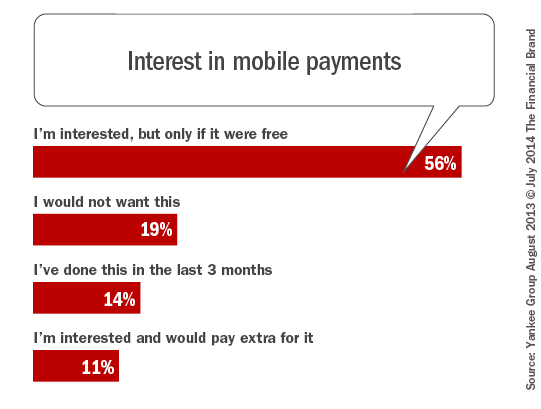 The unprecedented rise in mobile and digital channel use has resulted in a rapid reallocation of marketing dollars to new channels as well. Investment in the majority of traditional mass channels are decreasing as digital and mobile channel investment is increasing.

Caution should be taken, however, when viewing statistics around growth in spending categories since, for most digital channels, the foundation numbers are significantly smaller than those for channels like TV, radio, direct mail, email, etc. This causes changes in new media to look extremely large as a percentage when the actual dollars investment may still be lower than traditional channels.

In 2015, financial institutions will be allocating more dollars to digital and mobile marketing. Tactics such as digital retargeting, placing ads within mobile banking application and leveraging highly targeted mass media will be joined by increased investment in email due to the ability to target and link content. 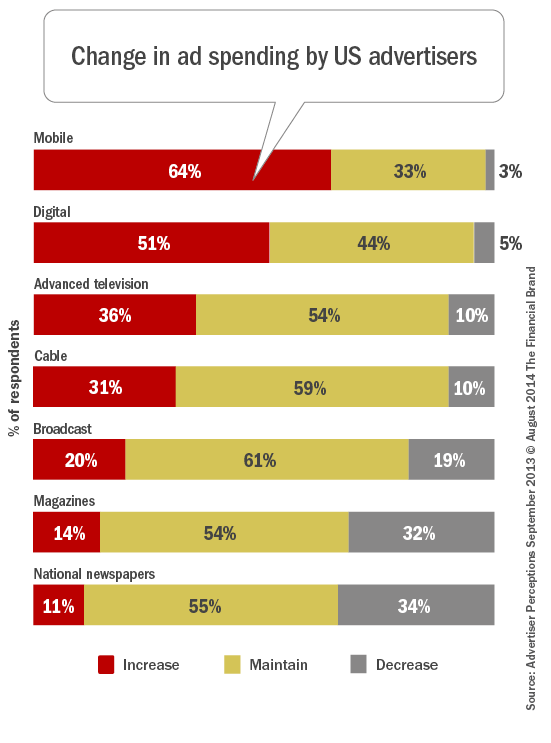