Subscribe Now Get The Financial Brand's FREE Email Newsletter
Research shows a strong positive correlation between e-bill adoption and customer satisfaction, loyalty and profitability for both financial institutions and billers. Yet, despite a growing digital consumer lifestyle, growth of e-billing remains underdeveloped, especially when compared to rates of online bill pay.

Marketing consists of filling wants and needs at a profit. The safer, less costly way to do that is to find out what the market wants and outdo the competition in delivering it. The riskier, costlier way is to introduce an unknown product that fills an unknown need – as 3M did with Post-It® Notes – and set about convincing the market that they can no longer get along without it.

At the outset, with no track record on which to base predictions, e-bill adoption fell in the latter category. It wasn’t quite clear whether the idea of going paperless would turn out to be Post-It Note success … or an Edsel flop.

Now, just a few years after being introduced, we know there is a strong market for going paperless. In 2014, e-bills accounted for 23% of the volume of bills presented among U.S. households, according to a study from Fiserv. This is a 2% increase over 2013 volume and reflects steady, though modest, gains over time. This is consistent with historical growth over the past 7 years of 1-to-3% per year. 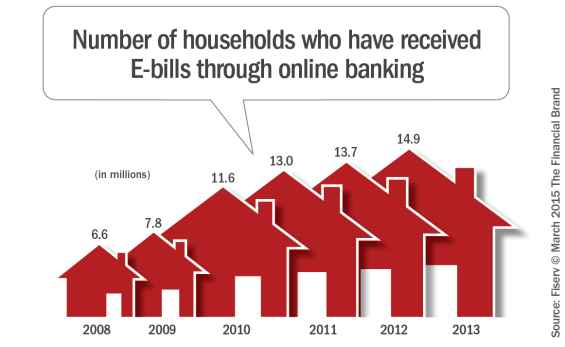 More significantly from an opportunity perspective, e-bills represent less than half the volume of online bill pay (49% of bills). For billers, this ‘eGap’ presents an opportunity to drive greater awareness and adoption among those consumers who already pay electronically. Moreover, with 76% of bills still being presented in hard copy, the potential for growth among all consumer segments remains largely untapped.

Clearly, e-billing is no Edsel. But, it’s not a Post-It Note success either … not yet, anyway. Post-It Notes became ubiquitous overnight, while e-billing is taking time to reach critical mass.

Confusion between an ‘e-bill’ and online bill payment may be part of the challenge. These two solutions are, in fact, at opposite ends of what should be a single end-to-end process. If your customers or members pay bills online, we have improved engagement, but haven’t eliminated paper totally. With e-billing, we are sending bills minus the redundancy of sending corresponding paper documentation.

There is definitely an opportunity for financial institutions to accelerate e-bill adoption. Not only are the potential savings significant, but there is also a positive impact on loyalty, longevity, and frequency, due to the sticky nature of e-bill adoption. In fact, data from the 2013 Fiserv Consumer Trends Survey shows that, in terms of overall product usage, e-bill users have a greater overall household value than those who use online bill-pay only.

There is every reason for consumers to embrace the entire spectrum from e-billing to online payments. It saves paper, postage,and detail work. It also enhances accuracy and improves record-keeping. 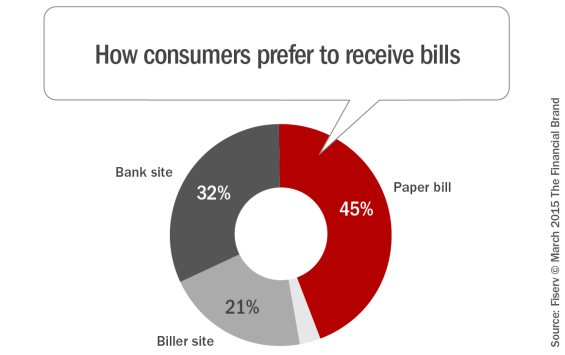 The ramification is that a great way to reach the most-responsive prospects is to advertise on the very devices they’ll use for signup, and later, use for making payments.

All things being equal, institutions may conclude that targeting Millennials will more than double the return on marketing investment. But all things aren’t equal. A look at Lifetime Customer Value reveals that fewer enrollments among older clients yields a greater return than more enrollments among younger ones.

There’s more to timing than reaching prospects of the right age. Reaching prospects at the right moment also impacts e-bill adoption. In other words, the best time to enroll customers and members for e-billing is when they’re already in motion –especially when ‘in motion’ means the consumer is just starting to pay bills online. 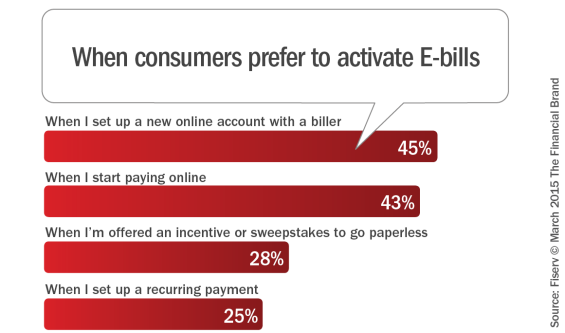 While it’s important for popup ads and other digital marketing to suggest e-bill adoption, it’s equally or more important to ensure that customer contact personnel do the same. Fiserv research indicates that this isn’t happening as often as it could.

In fact, low-tech, person-to-person marketing has been shown to pack more punch with more-reluctant clients. This makes sense since people with reservations about technology respond best to people who recommend technology than to technology that recommends itself. (Marketing Tip: Sales training and employee incentives can go a long way toward making employees more conscientious about signing up clients).

Despite the advantages of going paperless, some consumers seem reluctant to adopt. Why?

Hesitation begins with the mistrust of technology, resistance to changing one’s routine, and concerns about security. Interestingly, however, 40% of survey respondents fear that if they go entirely paperless, they’ll forget to pay their bills.

Consumers use paper bills as tactile reminders. They can’t place an e-bill in a ‘to be paid’ stack, attach it to the refrigerator with a magnet, or leave it by the phone. This phenomenon may explain why about half of consumers receive both paper and electronic bills, and why roughly half of people who pay bills online would still rather receive bills via traditional mail.

“One biller who allowed clients to try e-billing without requiring them to switch off paper billing boosted adoption by nearly 300% over a three-month period.”

Experience shows that the best way to neutralize this top barrier to adoption is to implement and promote notifications and alerts that advise consumers when an unpaid bill is due and about to be paid. Besides assuaging missed payment fears, bill-pay-due reminders help clients avoid late fees, in turn helping create the impression of a financial institution that watches out for customers rather than seeking to assess fees.

Though mistrust of technology and resistance to change are different fears, they can be handled with the same strategy. Similar to the way mental health professionals help their clients deal with fears by introducing them, in a safe environment and in small increments, to positive experiences related to their fear, the same can be done with e-billing.

By introducing a risk-free environment for trying e-bill adoption, financial service clients can overcome mistrust and resistance to change. At Fiserv, we observed that one biller who allowed clients to try e-billing without requiring them to switch off paper billing boosted adoption by nearly 300% over a three-month period.

Many would assume that security and identify theft concerns would top the list of consumer e-bill adoption objections, especially given the attention the media lavish upon the subject. While security is no small concern, only 20% of survey respondents ranked security as a preeminent concern. In fact, twice as many say they worry more about forgetting to pay bills. An equal number say they worry more about having to change their routine.

Security concerns should not to be overlooked in marketing, however. Rather than boast of impenetrable security – an irresponsible claim in the midst of an ever-growing cyber arms race – the wiser course is to demonstrate a strong commitment to security instead.

This can be done by distributing literature, setting up web pages, and holding seminars and webinars on how clients can protect themselves. There is also value in pointing out risks associated with paper billing – such as forgery, mailbox theft, and even ‘dumpster diving’ – that going paperless eliminates. These strategies will go a long way towards illustrating that your organization takes security seriously, without overpromising, and without inadvertently escalating needless fears.

As mentioned earlier, consumers can adopt e-billing only as fast as billers do. This is where retail and business banking divisions overlap to form a potential bottleneck. For financial institutions, the overlap presents an opportunity to bring on additional business clients.

The majority of businesses are wasting labor and cash by printing, stuffing, addressing, sorting, bundling, and mailing invoices that could be delivered, almost instantly, with a single click. Not to be overlooked is the cost of postage for sending bills by Presorted First Class Mail, which can amount to about twice the cost of printing and labor.

Moreover, there are advantages beyond material cost savings. One of the biggest and possibly most unsung benefits is the improvement in billing accuracy. Letting consumers send payment with a single click reduces danger of entering incorrect amounts, of inadvertently sending payments to the wrong merchants, and of having to straighten out resultant errors after the fact.

Beyond offering e-billing to your business clients, the discussions with businesses puts business bankers in great position to offer other services as well.

The best place to begin prospecting efforts is with businesses that use or are prime to use a lockbox service. These businesses bill large numbers of consumers on a monthly basis, and therefore stand to benefit in a big way from cost savings associated with e-billing. This is borne out by the types of companies already sending paperless bills, such as cable and satellite TV providers, Internet service providers, utilities, and insurance companies.

All indicators are that consumers and businesses are ready for e-bill adoption, and that all stand to gain considerable benefit from this solution. The trick is to present it to the right people, at the right time, in the right way. But isn’t that what marketing is all about? Opportunity awaits.