Subscribe Now Get The Financial Brand's FREE Email Newsletter
Consumers are increasingly using digital banking channels and functionality, but there are signs of stagnation due to inadequate communication of features and benefits by banks and credit unions. Most organizations also need to update their mobile banking apps to realize digital channel growth and related cost savings.

With an expansion of smartphone usage and enhanced digital applications across industries, it is not surprising that the majority of consumers prefer to interact with their primary financial organization via online and mobile channels. According to Fiserv’s 2019 Expectations & Experiences: Channels and New Entrants study, the preference for digital interactions (online plus mobile) is 58%, well ahead of the preference for branch interactions (32%). Most of the shift over time can be attributed to the growth in mobile use. 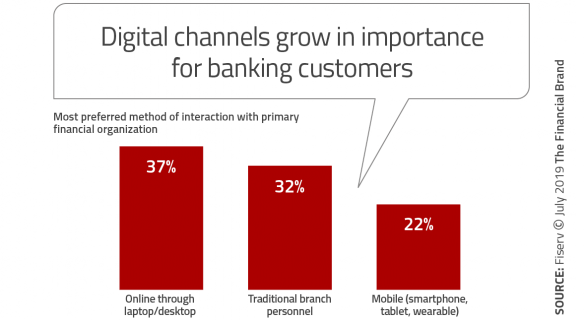 The question is, has the majority of potential digital banking growth already been realized, or has the industry not done enough to change behavior of those beyond ‘early adopters’? There is evidence that increased consumer education on the benefits of basic mobile banking capabilities and an increased focus on enhanced functionality, such as voice banking, could further increase use, decrease transactional costs and increase consumer satisfaction.

As would be expected, the use of digital banking is correlated to the age of the consumer. Aligned with the amount of usage of mobile devices, 77% of Gen Z consumers prefer online and mobile banking (18% prefer a branch visit), while 57% of seniors prefer to visit a branch to conduct transactions. But, there may be a missed opportunity within the demographic segments, since most seniors still check their mobile devices at least once an hour.

Have financial institutions avoided marketing the benefits of digital banking to older segments assuming they would not be interested? Is it possible that, while seniors have become more comfortable with their mobile device for communication beyond phone calls, banks and credit unions have not responded accordingly?

According to Fiserv, half of consumers made at least one in-person branch visit in the month prior to the research. Surprisingly, this number has not changed since 2018, with the most cited reasons for visiting a branch being to deposit a check (53%), withdraw cash (41%), deposit cash (36%), cash a check (30%) or speak to a branch staff member (14%).

The research indicates that branch visits are significantly higher for community banks and regional banks compared to large national banks and credit unions. This may be caused by either a lack of focus on consumer education or less advanced mobile banking capabilities. The good news is that, despite so many checks being deposited in the branch, the percentage of people doing so has dropped significantly from 2018 (61%) and 2017 (72%) in financial institutions of all sizes.

“Whether it’s online, mobile or in the branch, people engage with financial services in ways that work best for them and the task at hand,” said Matt Wilcox, SVP for marketing strategy and innovation, Fiserv. “That’s influencing how, when and why they interact with their bank or credit union, which requires new priorities and strategies.”

Another way branch-based check transactions can be reduced is by changing the disbursement of payments made by medical and insurance organizations and informing consumers about the ease of making electronic payments such as rent. Fiserv found that roughly 70% of consumers prefer electronic payments, yet the availability of this option still lags. 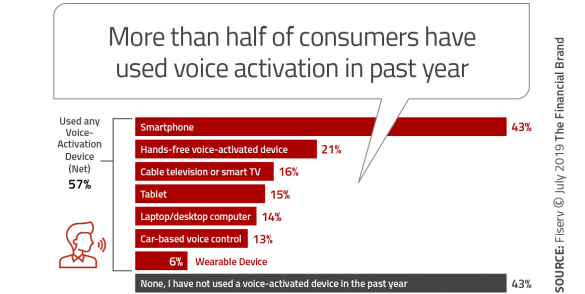 While overall use of voice devices has increased, 66% of consumers still don’t see a use for banking transactions. Much of this negativity is because of the issues of privacy and security. On the other hand, while only 9% of those surveyed had done a banking transaction by voice in the past year, 34% thought voice banking was ‘possible’ with another 38% not being sure (28% did not find voice banking to be possible).

To make voice-activated banking a viable alternative, it is clear that the barriers of not seeing a need (noted by 40% of consumers), security and privacy must be addressed, while at the same time adequately educating consumers on the speed and convenience of voice.

“Once consumers adopt new technologies in other parts of their lives, it’s not long before they expect to use those same capabilities to manage their finances,” said Wilcox. “Interest in voice-activated banking will likely follow that same adoption curve.”

Similar to the experience in the overall payments space, banks and credit unions lag retailers and mobile device manufacturers in the utilization of mobile wallets. Overall 41% of consumers surveyed indicated they had used some form of digital wallet in the past year with both retailers (Starbucks, Walmart, etc.) and mobile device manufacturers (Apple, Google, Samsung, etc.) having 19% penetration. Only 11% of consumers indicated using a mobile wallet from a financial institution.

While mobile wallet penetration still remains low, the risk of having non-banking organizations control the mobile payment ecosystem is a threat to traditional banking relationships. Not only does this impact the payments revenue for a financial organization, but the data associated with each transaction becomes insight for the mobile wallet provider to further expand their relationship with the consumer.

Complacency Is Not a Digital Strategy

It is clear that the growth of mobile banking has slowed compared to what was evident as recently as three years ago. With even a basic mobile banking offering, and nominal customer and member education at time of account opening, banks and credit unions could see significant movement of transactions from the branches to online and mobile alternatives until recently. To maximize digital banking growth going forward, more is needed.

In addition, the most aggressive digital banking marketers found new segments of consumers who appreciate the convenience of mobile deposit capture, mobile wallets and voice banking. Bank of America is a great example of an organization that has continued to educate customers who deposited checks in branches, owned voice-activated devices or wanted mobile wallet rewards. Their exceptional growth in mobile banking customers reflects their efforts.

For organizations not continuously improving their mobile banking apps or educating consumers on the benefits of digital engagement, the cost of delivering banking services will continue to rise compared to competing traditional (and non-traditional) financial institutions. In addition, as people of all ages become more dependent on their mobile devices, complacent institutions will fall outside the decision set for consumers looking for a primary financial institution.

In other words, digital banking growth is no longer guaranteed going forward.