An exhaustive report from comScore tackles tough questions about the digital banking space.

In a 28-page report titled The State of Online & Mobile Banking, comScore explores nearly every issue and topic financial marketers are wrestling with today. What is the growth rate for online banking? Which online services drive greater engagement? Why don’t more people sign up for online bill pay or PFM? Are consumers aware their financial institutions use social media? What’s the adoption rate for mobile banking, and where is it headed?

In the report, comScore analyzes the state of online and mobile banking activity in the U.S., providing key insights into customer behaviors, attitudes, satisfaction, service usage and mobile adoption.

In Q2 2011, 16% of the 234 million mobile users in the U.S. indicated that they conducted some type of financial-related activity from their mobile device in the past month. Nearly three-quarters of mobile bankers indicated interacting with banks on their mobile devices at least once per week, mirroring engagement frequencies seen for online banking use via a desktop or laptop computer.

Three out of every five mobile bankers are between the ages of 18-34, more than double the percentage of those who do not take advantage of mobile banking offerings in this demographic. Mobile bankers are also twice as likely to have a household income exceeding $100K vs. non-users (31% vs. 15%).

Bill pay continues to receive considerable attention across the industry, as banks increasingly try to grow their engagement with customers using this service. However, among those consumers who don’t use online bill pay, 43% say concerns with security are what keeps them from adopting the service. This signifies as massive 14% jump over 2010, when only 29% cited security concerns. Keep in mind, comScore’s study includes only internet users, so we aren’t talking about technophobes. These are people do a lot of things online, just no paying their bills. 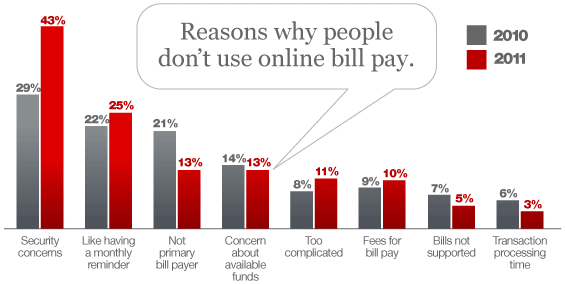 Use vs. Interest in Online Services

A moderate percentage of consumers expressed an interest in various online customer services, such as Personal Financial Management, and security-based services, such as identity theft services. However, adoption of such services was less than half the rate of awareness in many cases (with the exception of account activity alerts), indicating an area of opportunity for financial providers. 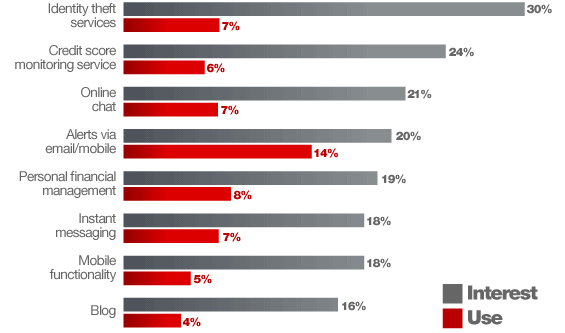 Ron Shevlin, a Senior Analyst with Aite, noted the anemic level of interest in PFM in particular. “The comScore numbers are not reassuring for PFM vendors,” Shevlin said. “It might be too late to get Boomers — and maybe Gen Xers — interested in PFM.”

Shevlin also things don’t look good for P2P payments. “Nobody knows about P2P payments,” he said. “This is a cause for concern because a number of the core apps providers I’ve talked to recently are expecting P2P payments to be big, and become a revenue generator for both themselves and the banks that offer it.”

With customers increasingly relying on online channels for managing their accounts, e-mail has emerged an effective, low-cost solution for communications. Consumer recall of email is quite strong, with 48% of consumers reporting they’ve received some form of e-mail communication from their primary financial institution in the last six months. 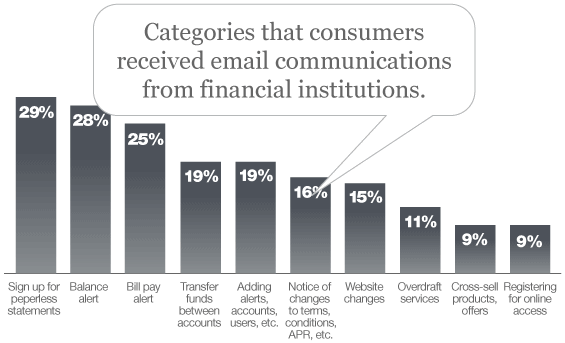 Even though banks and credit unions have flocked to social media sites, consumers haven’t noticed. A 2012 study by The Financial Brand revealed that 72% of financial institutions are on Facebook, 54% on Twitter and 49% on YouTube. But ComScore found that only 18% of consumers were aware their financial institution had a social networking presence. Four in five customers were either unaware or “unsure.”

Reality Check: Just because a consumer is “aware” their financial institution has a social media presence doesn’t mean they care. Even among those who are “fans” and “followers,” engagement rates are still extremely low.

The comScore State of Online & Mobile Banking report provides a comprehensive review of the digital banking industry, including emerging mobile channels. Results are based on a survey of more than 2,000 U.S. internet users. The study focuses on key trends in customer behaviors, attitudes, satisfaction, service usage and mobile adoption. The report includes 28 charts and graphs, all as equally fascinating as the three contained in this article. You can get your free copy after completing a simple contact form. The report is definitely worth downloading, and comes highly recommended by The Financial Brand. To download your copy, click here.