Subscribe Now Get The Financial Brand's FREE Email Newsletter
Transparency, financial advice, and fully customizable convenience were just a few of the characteristics millennials desired in their bank. Here is a behind the scenes look at the process of designing such a bank.

While there is a great deal of discussion around the importance of building a digital bank, few organizations have tackled the challenge of building an entirely new mobile banking platform from scratch. Even fewer have tried to build an offering specifically for Millennials … a generation that has shown a willingness to try non-bank solutions and who value simplicity and good design.

It is in response to this challenge that BankMobile was created, and why they believed they needed to develop an offering that was different than the majority of financial institutions already in the marketplace. It is also why the new bank asked for the assistance of a design firm in the very first stages of development.

As a backgrounder, BankMobile is a fee-free, branchless bank that has made waves for its campaigns targeted exclusively at millennials seeking greater mobility and flexibility in the banking process. BankMobile’s offerings include fee-free checking and savings accounts, a personal line of credit up to $5,000, no branches, and no-fee access to 55,000 ATMs across the country.

From the beginning, BankMobile identified their primary target as young Millennials. Selecting a target segment was only half the battle, however. The more difficult challenge was letting go of other audiences that also provide a banking opportunity.

While BankMobile was clear in their objective of introducing a youth-targeted mobile-only product, it took significant time and rounds of creative strategy to let go of Boomers. It can be hard to resist the safety of a broad net, but BankMobile understood that it was their focus on specialization that created value.

Our research found that the past decade’s explosion in smartphone use has created an enormous demand for on-the-go account management, full-fund transfers, and check deposits via photo. We also found that as technology has expanded, there has been a lag between what the user wants from the technology in their hands and what is being offered by financial institutions. Nowhere is this gap larger than for Millennials.

With Millennials set to spend $2.5 trillion this year, most banks and credit unions want a piece of the millennial pie. Understanding that Millennials aren’t one monolithic group, we wanted to really understand what this segment wanted from their banking experience.

Adrenaline’s video, featured at the New York Stock Exchange at the launch of BankMobile, captures the process of how we designed a bank around the millennial customer, putting them in the spotlight as they divulged their deepest feelings about traditional banking’s pitfalls. The general takeaway from Millennials is that, up until now, banking institutions couldn’t be trusted to do what was in the millennial consumer’s best interest.

With a vivid understanding of BankMobile’s target audience – money-minded millennials – Adrenaline imagined a progressive, youthful bank whose focus would be less on traditional branch services and more on tangible lifestyle benefits, such as smartphone supported mobility, ease of access, and financial confidence.

In days past, banking, like coffee, was a commodity – something to be purchased then used. Traditionally, banks lent money for interest and charged fees for their services. As a banking customer, you got a certificate of deposit, put money in, then cashed it out.

But much like coffee, banking has now risen above a simple article of trade. For BankMobile, Adrenaline fleshed out the idea that having no branches resulted in no fees, making the customer more empowered over their money.

As with coffee, the conversation around banking has risen above cost to one of lifestyle and aspiration. If a bank is built around what I want, then how a bank’s service reflects my life becomes the focus.

In developing our concept, we wanted to keep the story relatable enough to the broad audience, since very few, if any of them have a branchless bank at this point. It was our “if they imagine it, they will come” moment.

By focusing on BankMobile’s potential customers as individuals, we were able to get to a concept that was the through-line for the brand story. The value we helped identify and develop is one of individualized empowerment. 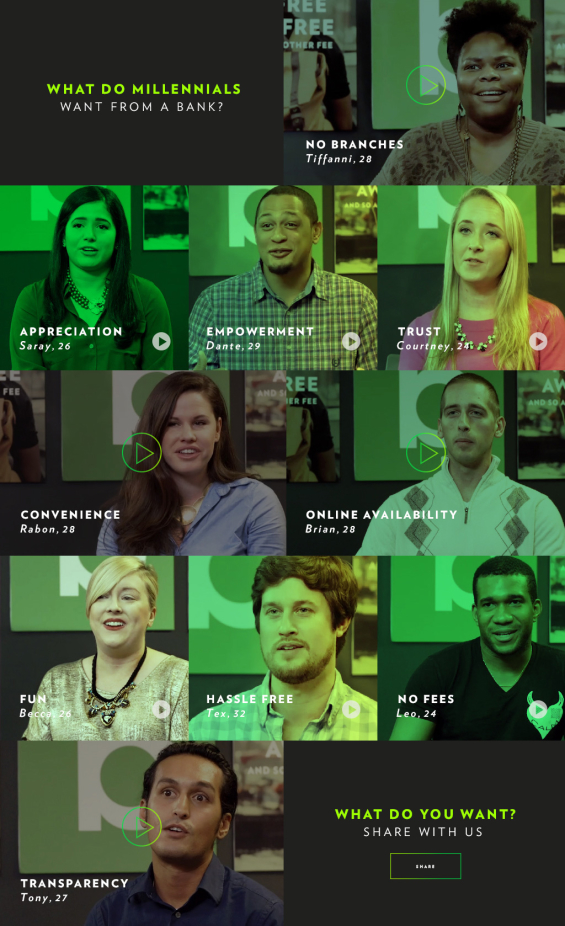 BankMobile may be a branchless bank, but consumers will still interact with it, probably on a daily basis. How could we help this brand represent a form of self-expression for its users?

Millennials identify brands they endorse, and currently they don’t endorse many, if any, bank brands. When you truly deliver what someone wants, you can expect some ears to perk up.

In this new era, Millennials and others don’t like to be marketed to. They like to choose what they like … what reflects their own personality. In addition, nothing is purchased or consumed without it being talked about first, which is a far cry from when people used to never talk about money. With BankMobile, our goal was to have Millennials actually like a bank brand and to push a conversation around this brand.

Since BankMobile was going to be a bank that Millennials built, we needed to determine what that looked like? At Adrenaline, we understood that the mobile channel experience was the key to success. We also knew that we could develop the most versatile, innovative product in the world, but if it was ugly, people wouldn’t want to use it. We are all looking for something that’s cool.

What makes something cool begins with visuals. So, from the identity down to the mobile banking app design, we had to make the design highly visual.

We incorporated lifestyle photography and infographic led data visualization to tell an attractive, compelling, visual story. This story would need to reflect our audience and make them feel at home with these highly visual mobile experiences.

The development of the app then moved from data display and data visualization to providing added entertainment and customization options for self-expression. It’s no surprise that the apps with some of the most data – online banking apps – were the last to fall away from being exclusively data-driven. With BankMobile, we were able to achieve both form and function … providing something cool that was data-driven, visually captivating and even cinematic. 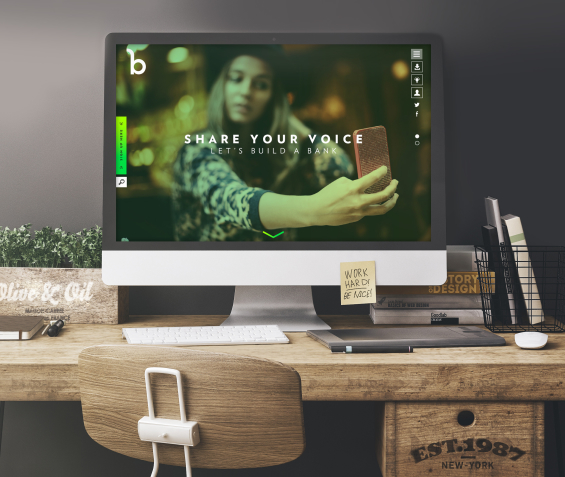 At Adrenaline, strategy was at the heart of developing the BankMobile campaign. It was not just a series of concepts we developed, but conceptual ideation that tied back to an overarching strategy.

Without this strategy, it would be hard to make meaningful impact on our audience, short or long-term. The hardest part is usually not not creating the strategic concepts, but helping clients stay the strategic course.

It is understandable that some clients tend toward concepts that present the least risk and raise the least controversy. This is choosing the short-term, safe and familiar over distinction. In other words, the immediate over the strategic. But that’s not what it takes to stand out in today’s saturated media environment, and BankMobile understood that.

We’ve learned that most companies developing something new want to be challenged to be different and carefully distinctive. That means creative that doesn’t push the brand too far from the actual experience they can deliver, but new conceptualization that helps to set a new industry bar.

With BankMobile, we not only developed a bank around what the target audience said they wanted, but also completed a competitive analysis to know what was being offered in the marketplace and how those banks were not delivering what we knew our audience wanted. We ensured that what we were developing would set a new banking industry standard.

Gina Bleedorn is Executive Director of Adrenaline, an experience design agency that spans from brand development to digital deployment to implementation in retail and virtual environments, connecting businesses and consumers. Her areas of focus include brand and marketing strategy, retail environments and holistic experience solutions. Adept in both traditional and interactive design, Gina has delivered outstanding brand and environmental solutions for financial institutions and retailers around the country.

Scott Hickman is Managing & Creative Director of Adrenaline. With over 20 years of experience in brand strategy and development, print, interactive and motion design, Scott has been a key player in brand communications for clients such as Apple, Yamaha, Nike, Harley Davidson, IBM and AT&T. He attended Vancouver Film School for 3D Animation/VFX, has an MA in Global Politics and has taught at The Academy of Art in San Francisco.