Subscribe Now Get The Financial Brand's FREE Email Newsletter
The combination of new digital technologies, rising consumer expectations, increasing competition, and an intensifying war for talent is changing the banking industry faster than ever. It's critical that financial institutions take action to ensure their long-term survival.

Ever since the financial crisis of 2008, the vast majority of financial institutions have sought to deliver profitability through cost cutting and efficiency measures. While these strategies have worked to varying degrees up until now, future growth will demand much more. Not only are most legacy banking organizations saddled with antiquated back office systems and processes, they have increasingly made only modest changes to satisfy an increasingly demanding consumer. Most are also completely unprepared to staff positions that require new digital skill sets.

Remaining relatively complacent to disruptive changes in the marketplace is not the best path to sustained financial and competitive viability. Banks and credit unions need to better understand the transformative forces that are impacting the industry. More importantly, organizations need to respond to these changes more proactively than has been done up till now. With increasingly uncertain macroeconomic and political forces in play, it is time to embrace change, take risks and disrupt the status quo.

According to McKinsey, banking and non-banking organizations ranking in the top 20% in profitability from 2010-2017 generated more than 30 times the profit than those in the middle 60%, with the lagging firms having significantly lower profitability. More interestingly, the position of companies over time remained relatively consistent, with only 1 in 12 companies rising from the middle ranks to the top of the profit rankings.

Looking only at the banking sector, the situation was not much different. The top 20 global banks represented 95% of the industry’s profitability, with few banks able to move up the profitability ladder. In fact, nearly 90% of bottom and middle quintile banks remained mired near the bottom of profitability from 2003-2017.

McKinsey found that while half of a company’s position was determined by where the firm started and their ability to navigate industry trends, the other half was determined by factors such as resource allocation, productivity improvements and investments for differentiating future growth. In other words, winners going forward will most likely be determined by which firms best understand the changing marketplace – and which ones make the bold strategic choices needed to respond to these changes.

The seven key trends that McKinsey believes are most important include:

One of the advantages traditional banking firms have compared to both big tech and challenger banks has always been established levels of trust. But as consumers get increasingly comfortable with big tech players like Amazon, Google, Apple and Facebook as well as challenger banks such as Monzo, N26, Starling and others, the trust levels for these relatively new entrants has increased.

Not all of the big tech firms or challenger banks have established the same level of trust, but all bear watching as they continue to deliver digital convenience and transparency that consumers are increasingly demanding. While most of these firms do not intend to compete in all traditional banking product lines, the fact that McKinsey found that nearly two in three consumers would trust Amazon (with their 100 million Amazon Prime households) to handle their financial needs – and one in three would likely open an Amazon checking account – should be concerning. 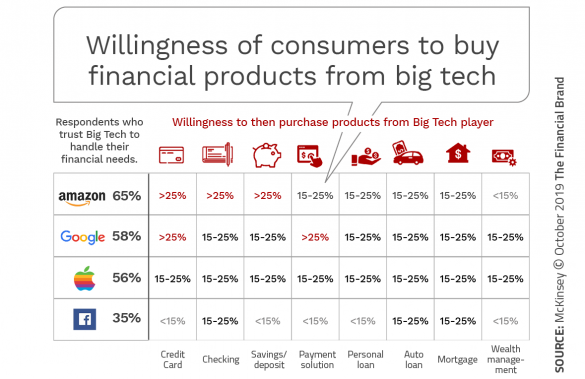 The ability to expand beyond traditional financial services provides opportunities for banks of all sizes. In the 2019 Future of Banking Executive Survey, fielded by McKinsey, 44% of US bank executives said that they expect non-financial products to represent 10% or more of organizational profits.

The challenge, according to McKinsey research, is that the consumer is not as likely to use their current bank for services such as healthcare, retail, travel, etc. where big tech firms have made significant headway. One way to bridge this gap could be for traditional financial institutions to partner with organizations that already have a recognized foothold in non-financial services. It was found that younger consumers are much more open to new, expanded ecosystems than older consumer segments.

3. Digital Use Up, Digital Satisfaction Down

Once considered a functionality for only the younger consumer segments, digital banking (and more specifically, mobile banking) has become the preferred engagement channel for virtually every consumer segment. Consumers of all ages are looking for easy, seamless ways to transact banking, check their financial status and receive real-time recommendations.This demand extends not only across age segments, but also all wealth stratification. While digital penetration is still lower for the older and wealthier, the growth potential is greatest.

This demand for digital experiences provides the benefit of multichannel engagement, while also challenging banks and credit unions to provide seamless end-to-end digital capabilities. Asking a consumer to visit a branch to complete a digital account opening or loan application is no longer acceptable. More often than not, such a broken process will create an abandoned ‘shopping cart’ and disenfranchised consumer.

Consumers have long memories. While the financial crisis was more than a decade ago, consumers still believe the banking industry was largely responsible for people losing their homes and jobs. Now more than ever, consumers – especially wealthy consumers – believe banks and credit unions should take an active role in societal issues.

According to McKinsey, “Customers expect that banks should truly act on relevant societal issues, rather than just be proforma good corporate citizens.” Furthermore, “Both [banking executives and consumers] identify the same three critical activities as being important: providing transparent and fair services, enabling financial literacy of consumers, and offering innovative products for the economically disadvantaged or under-banked populations.”

Most financial institutions have largely ignored the digital ‘elephant in the room’ – legacy back office systems that are not equipped to support modern digital products and services. The good news is that laggard organizations can benefit from significant technology advances that are easier and less costly to implement than just a couple years ago. The bad news is that there is some significant catching up to do for those firms just beginning the back office conversion process.

The reality is that continuing to support a banking operation with slow, siloed systems is significantly more costly and less efficient than new fintech and big tech competition. And, more importantly, the consumer is not going to be accommodating to organizations that charge more, deliver less and are not providing real-time engagement.

According to the McKinsey research, “By leveraging leading-edge technologies, banks stand to make substantial potential gains: cost-to-income ratios going below 25%, cost-to-asset ratios approaching below 50%, and marginal costs effectively dropping to near zero.” 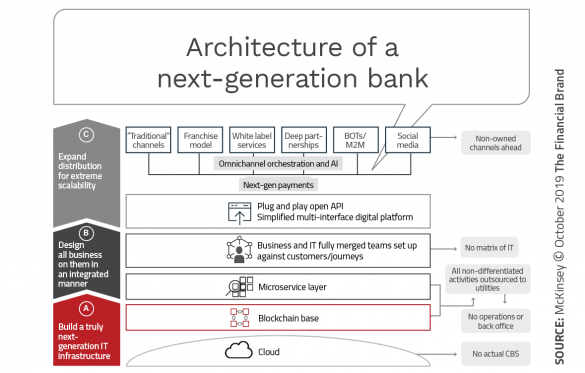 Internal and external risk mitigation in banks needs to adjust immediately to the realities of the marketplace. And, unless banks act now and prepare for the digital and technological realities of cyber-security, they may be overwhelmed by the new demands. These demands are not just regulatory or compliance-based, or traditional loan loss reserves and the risk from cyber criminals, they include the increasing expectations of the consumer that their financial institution will protect their privacy and funds on their behalf.

According to McKinsey, this also includes recruiting the right talent to address future needs. “Risk teams at most banks are dominated by conventional compliance and audit functions. Future risk management will call on a more diverse and integrated set of specialists in social media, cyber-security, and crisis management.”

7. The Future of Work Could Displace an Entire Generation of Bankers

Currently, the percentage of digital positions at most banks remains under 10%, with the most digital banking organizations having 15-20% digital roles. In comparison, most technology companies have a digital staff density of close to four in ten. In other words, most financial institutions are not prepared for the digital future. More concerning is that only a few organizations have a plan in place to retrain or develop current staff (and executives) for the future. Part of the reason may be that many banking executives equate traditional IT roles with digital roles, which are quite different, as McKinsey notes. The result is that these leaders having an inflated perception of their institutions’ digital staff composition, as shown in the bottom segment of the chart below. 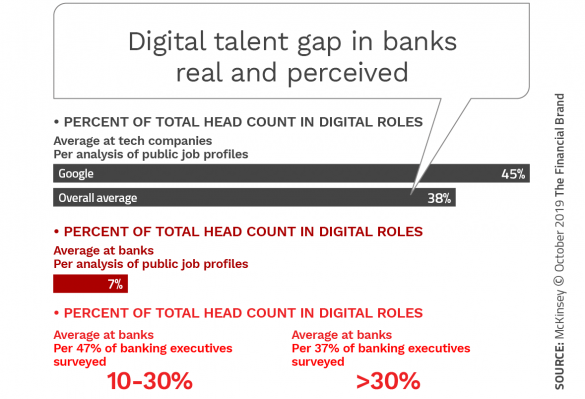 As this changes, the impact will be displacement of entire parts of banking organizations that were built for an analog world. This could create social unrest. There have already been protests in many countries by banking employees concerned about losing their jobs due to automation and digitalization. The reality is that digital transformation will not stop. Banking organizations need to be better prepared.

It is imperative that banks and credit unions recognize the skills that will be required in the future and to support the retraining and self development needed to fill positions that will be in demand. These include basic technical and project management skills along with more advanced digital skills, including agile development, product management, user experience design, data science, and digital marketing analytics. While this training may be supported by the government at some time, organizations can’t wait for this possibility.

It is true that the largest financial institutions have an advantage when it comes to digital transformation. But, the advantage of scale is not as significant as most banking executives believe. First of all, banking organizations of all sizes will need to recognize – and act on – all of the transformation trends above … and more. While scale helps, it is not an insurmountable advantage at a time that most digital technologies are available to organizations of all sizes.

In addition, there is evidence that smaller organizations can leverage the advantage of agility and the cultural shift that is required to support digital transformation. The challenge of training current employees and management for a digital future could also be easier at a smaller organization.

Organizations of all sizes need to become more aware of the challenges in the future. More importantly, they must implement and act on strategies that will disrupt legacy thinking and legacy banking as we have known it. The consumer is demanding it, the competition is already providing it and each organization’s financial results depend on it.