Subscribe Now Get The Financial Brand's FREE Email Newsletter
Study highlights the greatest risks, challenges and areas of opportunity for banks and credit unions over the next 12 months.

What do financial executives say are their biggest threats, challenges and opportunities? An annual study from Computer Services Inc. (CSI) examines the priorities, initiatives and areas of focus that will define the strategies for community-based institutions in the coming year. The report includes survey data and industry-specific analysis on the issues commanding attention from banks and credit unions. Here’s the executive summary.

Still Struggling With That Nasty Hangover

The fallout from the Great Recession and the mountain of new regulations slapped on the banking industry following the financial meltdown of 2007-2008 continues to haunt institutions. Roughly a third of respondents said that driving growth and profitability was going to be their greatest challenge, a sign that all the increased regulatory pressure on financial institutions still weighs down their balance sheets. This is highlighted by the number of respondents who also cited compliance as a chief concern (28.7%), the number two challenge financial institutions say they face in the coming year. 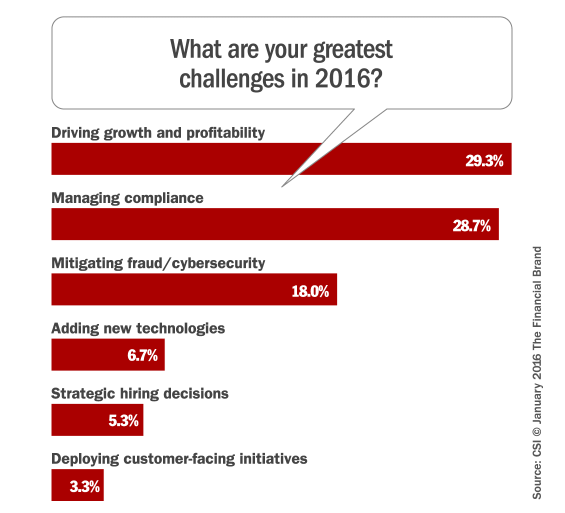 Mitigating fraud and related cybersecurity issues also among the top biggest problems banking providers say they’ll wrestle with. Consumers have grown weary of data breaches. They resent it when their cards need to be replaced simply because there was a weak security link somewhere in the payments food chain; being forced to update all your online accounts and change all your autopays is about as disruptive and painful as switching banks, and even more irritating when you have to repeat the process every 6-18 months. The data in CSI’s study suggests banking providers are starting to appreciate both the reputational risks and hard costs associated with reissuing cards. This is definitely a major problem the industry needs to tackle.

Looking at the top three challenges cited by financial institutions, it seems they will be busy focusing on little more than internal issues — compliance, security and the bottom line — leaving little room for new customer-facing initiatives that could improve the experience. How can banks and credit unions innovate, develop new products and build out their digital capabilities when they have to expend so much of their time, energy and resources just treading water?

Unsurprisingly, financial institutions cite interest income and loan growth as their greatest opportunities. It is, as CSI notes, how they make money. But CSI says their optimism is supported by data from the FDIC, with total loan balances rising by $95.3 billion during the third quarter in 2015. Over the past 12 months, lending grew by 5.9% to $482.2 billion, the largest growth rate since mid-2007 to mid-2008. Loan growth was even stronger among community banks, where loan balances grew by 8.5% over the past 12 months to $111.1 billion. And community banks continued to hold 44% of all small loans to businesses. 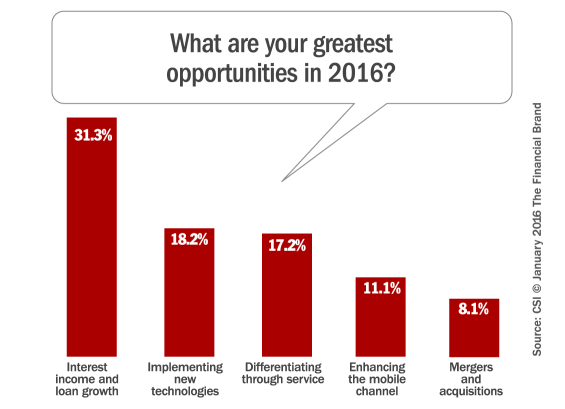 While many respondents (18.2%) say that their biggest opportunities this year involve new technologies, this is down notably from last year (22.5%). Does this suggest that the industry’s current obsession with fintech — fueled by endless media reports of doomsayers claiming that traditional banking providers have no future because they can’t keep up — may be starting to ebb? No. Financial institutions may be somewhat less enchanted by the blustery hype surrounding fintech’s potential, but that doesn’t mean they are turning their backs on it. Two-thirds plan on increasing their investments in tech this year, and one in ten respondents said that enhancing the mobile experience will be their single biggest area of opportunity.

“This shows that the industry has embraced the idea that mobile banking is no longer just another option,” say CSI in its report. “Consumers are going to do their day-to-day banking via digital channels, saving branch visits for more complex needs.”

Diminishing the Fear of Disruption

In the last few years, much has been said and written about the “disruptive outside forces threatening to rock the financial industry.” But banking execs see more upside potential than risk. In CSI’s study, 40.8% expecting non-traditional services to have a positive impact on their profitability. 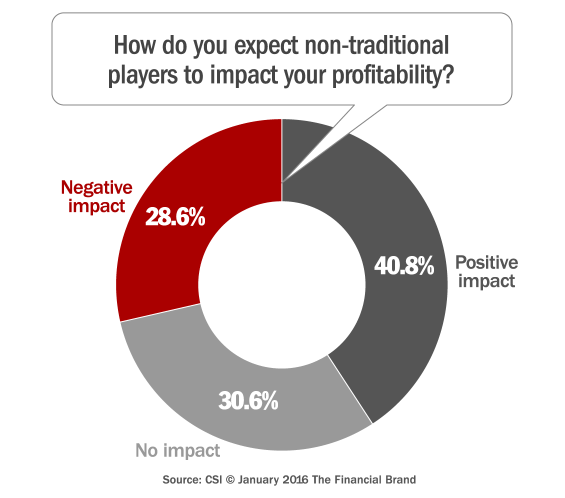 CSI says that the industry’s increased optimism in this category conveys their understanding that some of these new technologies will actually complement their offerings. For instance, if a bank’s debit card is in Apple Pay, that’s going to drive more transactions through the bank and increase its interchange income.

Banks and credit unions think they can rely on their “outstanding service” to compete for deposit dollars. In CSI’s survey, 19.4% said that this will be the key to attracting new customers. Saying that “service” is the secret to success is the kind of shallow platitude corporate execs like to toss around because it just sounds so good. Who can argue against the positive power of “outstanding service?” 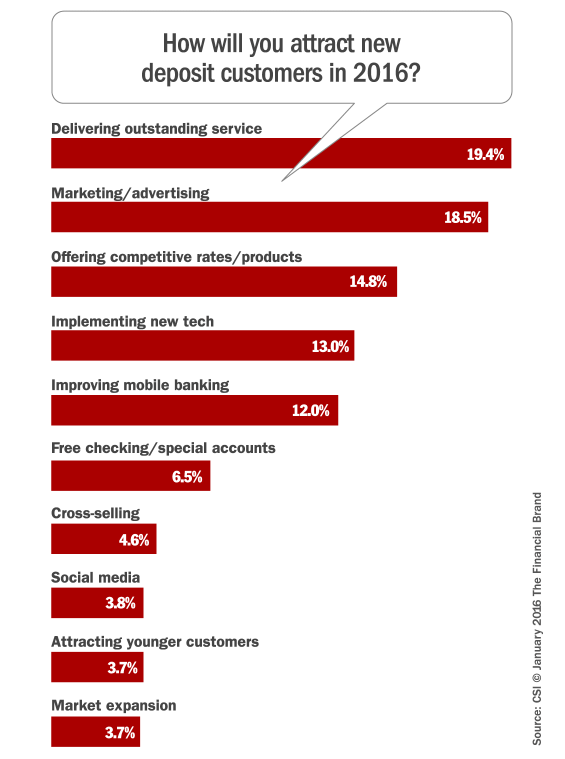 As The Financial Brand wrote back in 2010, every bank and credit union says what differentiates them is their “service.” But if everyone says “our service is better,” someone is lying. Besides, as a provider of financial services, your service has to be good; if it isn’t, you’re out of business. Saying “service is what differentiates us” is usually a cop-out and a roadblock.

EMV implementation was named the top strategic focus this year at 58.2%. While banks are indeed issuing the more secure, chip-enabled debit cards, widespread EMV acceptance largely depends on retailers. According to data from Paychex, 75% of consumers have received a chip-enabled card, yet only 47% of retailers and restaurants have switched to the EMV readers. CSI says it is inevitable that increasing fraud will begin to put a financial strain on retailers, and when the pain becomes too great, more will begin to accept chip cards. 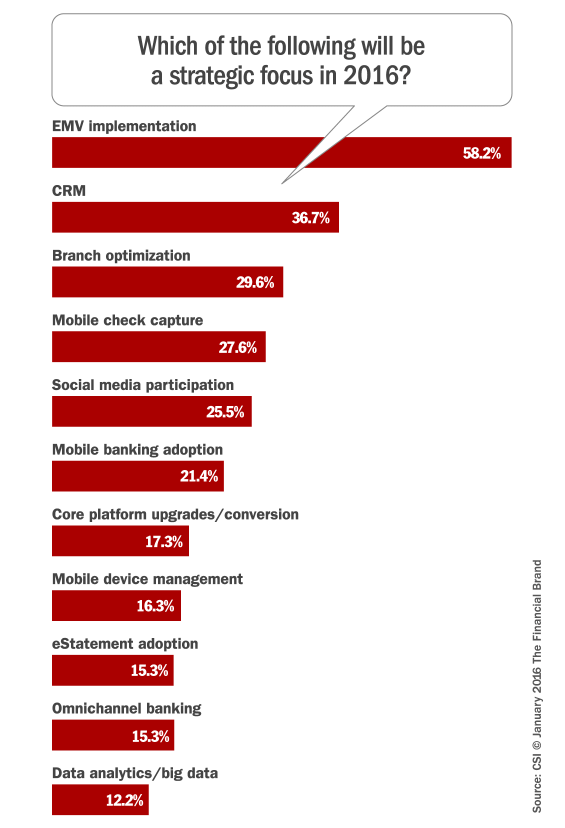 CRM and optimizing branches are also among the most important initiatives financial institutions will focus on. One quarter of all respondents also feel that participating in social media will be a critical area, even though the ROI in these channels continues to be a big question mark.

Only 12.2% place significant strategic importance on their data analytics capabilities — a number that seems quite low given the realities facing marketers in the Digital Age. With consumers shifting their banking behaviors to digital channels, nearly everything they do can now be measured, tracked and analyzed. This should yield models that allow financial institutions to more easily segment, automate and personalize both their marketing messages and the customer experience, but this will undoubtedly require cultivating new skillsets.

Respondents in CSI’s study most often singled out enhancements in mobile and online platforms as their main approach to elevating their service experience. CSI says this is a welcome sign of the importance institutions are placing on these channels. 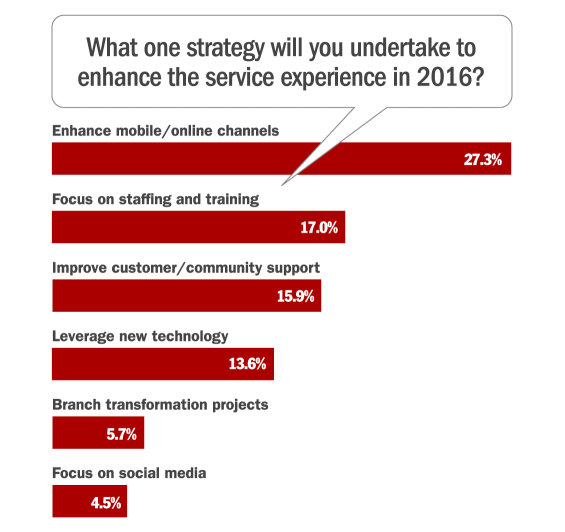 While leveraging new technology certainly plays a role in raising the bar on digital channels, it can reach much further. For example, the availability of secure wireless networks and core-linked mobile tablets can rejuvenate the branch experience.

“There’s nothing like the feeling you get when you walk into a branch and see a banker right there holding a tablet, ready to help with every need or problem,” says CSI. “That’s what innovative technology is all about.”