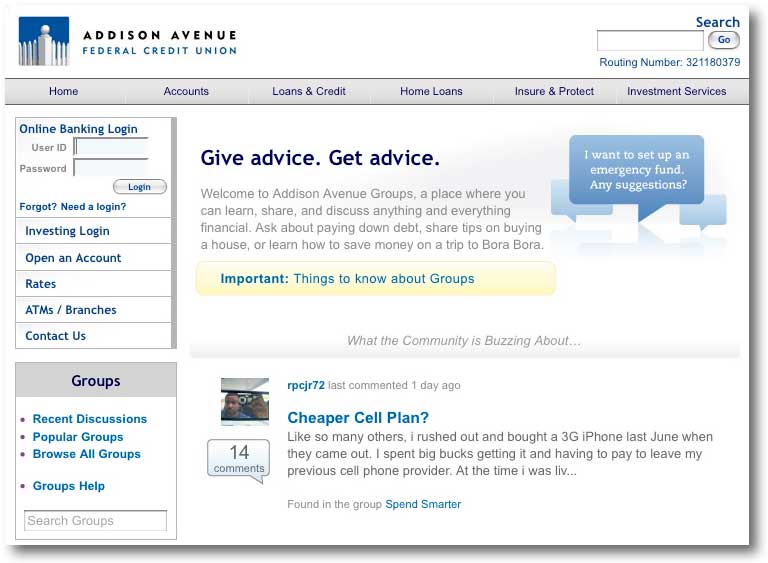 Groups cover broad subjects like “Buying a House,” within which are topical discussions such as “Mortgage Payment for Debit Ratio,” and “Buy vs Build.” Discussion is open to both Addison Avenue members and Wesabe.com customers (except for a few specific groups), which greatly expands the number of people holding conversations in the online community.

“We invested a lot of time, energy, and money to launch Addison Avenue Groups,” the credit union said. “You can go join a discussion (or start your own) about any financial issue, topic, or question that comes to mind.”

“You can now leverage the wisdom of thousands, online, any time, for free,” the credit union noted. 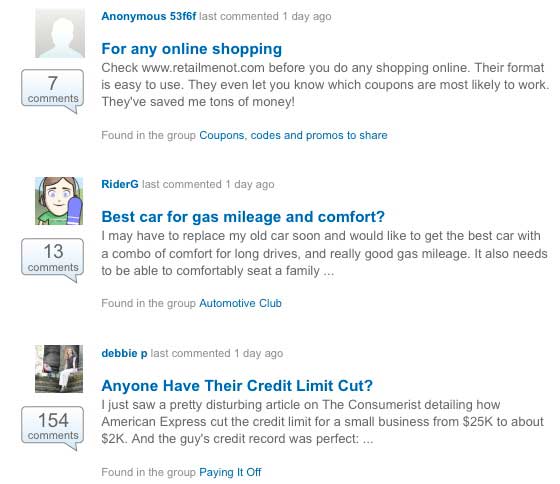 A page for each “Group” displays the most recent discussions.

“After discovering the richness of personal finance wisdom in Wesabe’s online community, we knew it was essential to provide this experience to our membership,” said Stu Fisher, SVP of eCommerce at Addison Avenue.

Marc Hedlund, CEO of Wesabe, says, “Leveraging the Addison and Wesabe communities, members will have access to thousands of smart advisors to help them reach their financial objectives.”

” Not only does Addison Ave. understand social networking and how to add value to a key demographic, but they took it to a level that makes perfect sense.”
— Eric Gagliano, Market Match

Openly displaying member posts and comments on the Addison Avenue website certainly shows a level of confidence few financial institutions have previously shown. It gives the impression that Addison Avenue is transparent, progressive, and receptive to suggestions and criticism. Not very many other financial institutions are willing to take that risk, though notable exceptions include USAA’s Member2Member forums and the First Direct Live microsite.

Key Fact: Addison Avenue members bank primarily online, with only about 30% ever setting foot in a branch, which presents a unique set of community-building challenges for the credit union.

“We tweet, blog, reach out through our online community Groups,” Addison Avenue’s Fisher says. “We do whatever it takes to keep in touch with our members.”

The credit union even hosted a coffee-shop TweetUp, where Addison Avenue members on Twitter could meet and chat in real life.

Bottom Line:
Addison Avenue Groups brings people — members and prospective members — together in a constructive, value-added and relevant manner. The quality of the peer advice is secondary to the engaged sense of community that members get from the conversations. And as the initiator and facilitator of this community, Addison Avenue scores big with participants.