Subscribe Now Get The Financial Brand's FREE Email Newsletter
Age and income aren't the only ways to break down financial consumers. This study's segmentation model reveals some interesting differences in how people think about banking and relate to their primary financial provider.
Subscribe Now!

Saylent commissioned a study through Informa Research Services to assess consumer and small business banking preferences and the depth of relationships they have with their financial institutions. The research findings provide key insights into how different groups prefer to interact with their bank and the products and services they desire.

The study breaks down participants’ responses into four distinct segments:

Salyent didn’t just analyze audiences according to one parameter though. Like The Financial Brand, they are big believers in the principles of segmentation — keep drilling down. Is their study, Saylent cross-examined their data using other factors besides level of investable assets, including age group and banking status.

“The large underbanked and Millennial markets present a substantial opportunity for customer growth and revenues,” observes Tyson Nargassans, CEO/President of Saylent. “Banks and credit unions that differentiate, and package products for different audiences — including incentives and rewards for specific behaviors — will drive adoption, more effectively serve customer needs and bolster satisfaction and loyalty.”

Saylent says that cash rewards are an effective tool to encourage mass market consumers to adopt new behaviors. Specifically, their study found that offering cash incentives to this segment would drive greater adoption of electronic delivery channels. For instance, 70% of consumers said they would enroll in eStatements for a cash reward or the equivalent (e.g., a preferential interest rate).

Furthermore, a solid 30% of mass market consumers say they would stop using branches if they could receive rewards on their checking account like ATM refunds, above market interest rates and/or cash rewards.

“Identifying and taking advantage of cross sell opportunities is the most successful way for banks to increase market share in the mass affluent space,” Saylent says in its analysis. But the road won’t be easy. “Competition for this segment is intense from both banks and other financial service providers like wealth managers.”

Un- and underbanked consumers are defined by the FDIC as those who have used an alternative financial service product (like a payday loan) in the previous 12 months. In 2013, the FDIC estimated size of the underbanked market size encompassed 20% of the U.S., totaling 24.8 million households, while 7.7% or nearly 9.6 million households (1 in 13) were unbanked. These consumers are a large and growing segment who can be profitably brought into the mainstream of financial services… but only if they are offered the right products.

Saylent’s study found that 54% of underbanked consumers would switch from alternative financial service providers to a bank offering a product with no overdraft fees, and that 25% would pay between $10–20 per month for such an account.

Saylent’s research proves the old adage that “credit leads” in the business banking space. The study found that over 70% of business clients began their relationship with their bank based on a loan or line product. 97% of small businesses with a credit relationship shopped their financial institution based on credit policies and pricing first. Deposit products were a secondary consideration. 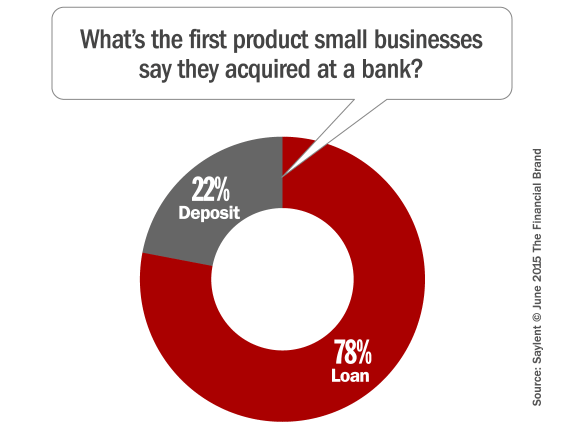 97% of respondents were satisfied with their banking relationship, but 71% said they would consider switching to a bank or credit union that could help them save more time and money.

Across all segments, branch location is considered important or extremely important by 78% of survey respondents. However, only 13% report the branch as their primary channel for managing their money. This indicates that branches are critical to acquiring new clients but that they will be lightly trafficked after that.

But times are changing, thanks to Millennials. This new generation of financial consumers could have a profound effect on the delivery systems in the banking industry. Salyent study revealed (somewhat unsurprisingly) that online banking is the preferred money management channel across all consumer segments analyzed; however, Millennials are three times as likely to report that mobile is their preferred channel.

“This confirms the need to continue investments in mobile banking and indicates that some incentives may be required to convert customers to the mobile channel,” Saylent points out in its report.