With the lowest number of bank/credit cards (1.57) of all of generations and a low total debt averaging only $2,682 on those cards, one would assume that Millennials should be able to manage their debt wisely. But with higher utilization compared to their card limits, higher incidences of late payments, and a total overall debt load totaling averaging $23,332, it seems this generation is not entering learning positive credit behaviors. These factors may help explain their low average credit score: only 628.

The Experian study looks at credit scores, the number of credit cards held, how much people are spending on those cards and the occurrence of late payments (among other factors) for four generations: 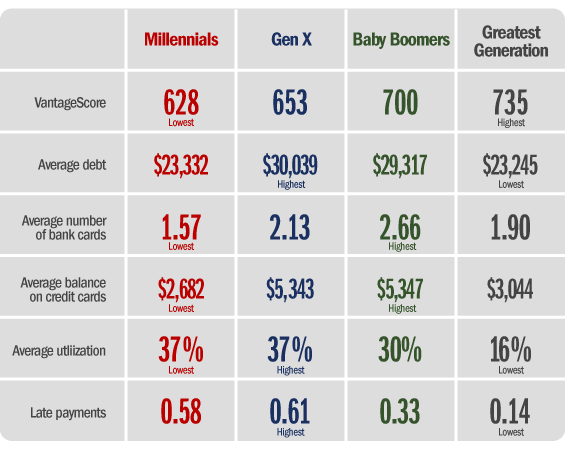 The study also analyzed in Metropolitan Statistical Areas (MSAs) to provide the 10 highest and 10 lowest credit scores for each generation across the nation. You can check out a city-by-city and state-by-state comparison of credit scores at an interactive website Experian maintains (hint: states in the north like Minnesota and Wisconsin are best, while states in the south like Louisiana, Mississippi and Texas are worst).

With an average credit score of 735, this generation not only has the best score, but also has the lowest average debt, low bankcard balances and lowest utilization, which means that with the few bankcards they have, they aren’t relying on them heavily, are making payments on time and may be paying those bills in full each month.

When analyzing the best credit scores in MSAs throughout country, the top 10 scores range from 753 to 757 and all are attributed to this generation, with the Greatest Generation residents of Mankato, Minnesota, holding the top score (757) nationally. The lowest score for this generation belongs to the residents of Laredo, Texas, with a score of 692.

The average debt amount of $16,768 in the city of Bowling Green, Kentucky, is the lowest in the country — 39.9% less than the national average.

With the most bankcards of all the generations (2.66), this generation relies heavily on those cards, racking up the highest balances of all the generations. Even with the high balances, this group has an average utilization percentage and low incidence of late payments. They are managing their debts well and have maintained a higher-than- average credit score of 700.

Baby Boomers in New York City have the most credit cards with an average of 3.28, which is 49.8% higher than the national average.

This group has an average debt amount of $30,039 which is 7.7% higher than the national average and is the highest of all the generations. Not only is their debt high, but it seems they are using their cards much more and may not be paying those debts off or on time as they have the highest occurrence of late payments (0.60) that has ultimately resulted in their average credit score of 653, which is 28 points lower than the national average.

Gen X residents in Fairbanks, Alaska have the highest average debt amount in the country, with an average of $36,150, and the highest utilization rate of 47%.

The highest credit scores for Gen X are in Minneapolis, Minnesota, with an average of 690 and the lowest belongs to the residents of Greenwood, Mississippi, at an average of 641.

This group has the lowest average credit scores, is over-utilizing its bankcards and is beginning to develop bad credit habits, such as paying bills late.

The Millennials with the highest credit scores live in Charlottesville, Virginia, with an average score of 668, which — despite being this generation’s best credit score — is still 13 points lower than the national average. The lowest scores are in Greenwood, Mississippi, at 558.

In Eureka, California, Millennials have the lowest average debt of their generation with only $18,751.

Michele Raneri, VP of analytics at Experian, says Millennials need the most guidance to improve and build their overall credit health.

“The younger generation is still building their credit,” Raneri says. “But with the right combination of experience, credit education and choosing credit offers wisely, the 20’s can be used as a time to demonstrate creditworthiness and build a positive credit history.”