Consumer trust in the top 50 global financial institutions remained negative in the third quarter of 2013, according to a proprietary benchmarking index from Thomson Reuters measuring brand sentiment in both social and news media channels.

The industry still suffers with a net -1.5% trust level, but the study offered a few glimmer of hope for battered and beaten big banks. Sentiment essentially remained stable for the third quarter, which — in light of recent reputational trends — could be considered an improvement for the financial industry. In this case, “good” means things are “not getting worse.” 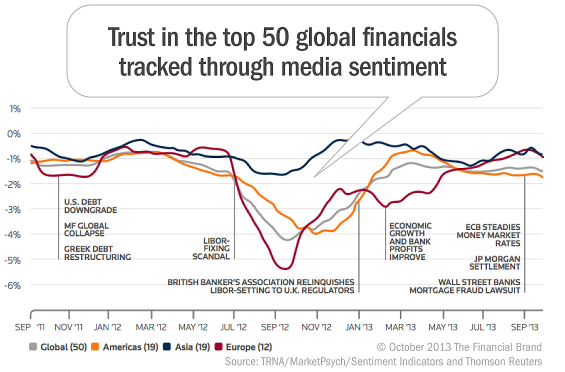 At the geo-continental level, there continue to be subtle but important shifts. Institutions in Europe and the UK saw modest third-quarter improvements in trust sentiment (from -1.5% to -1.0%), and are now on par with the Asian institutions which have led in trust scores for virtually all of 2013 at -1.0%. At -1.6% the institutions in North America were flat for the quarter, but had the lowest levels of confidence overall. European institutions may have bore the brunt of the financial crisis, but the reputations of their American peers are paying a heavier reputational price.

Movement in the trust sentiment scores over the quarter appears driven by a range of factors and events. For instance, the August Justice Department suit against BofA over mortgage fraud and record JP Morgan’s settlement in September severely affected institutions in the North America.

Meanwhile in Asia, ongoing concerns about the strength of the economy and “shadow banking” in China appear to have had the greatest impact on overall trust sentiment for banks in that region.

Regulation as a Barometer of Trust

The level of regulatory activity accelerating and doubled since the Dodd-Frank Act, with no signs it will abate any time soon.

The level of regulatory activity worldwide continued its strong upward trend this quarter. The average daily number of regulatory alerts tracked by Thomson Reuters Accelus rose to 110, roughly double the daily average for the same quarter in 2010, and at the end of the third quarter stood at nearly 19,000 alerts for the year. 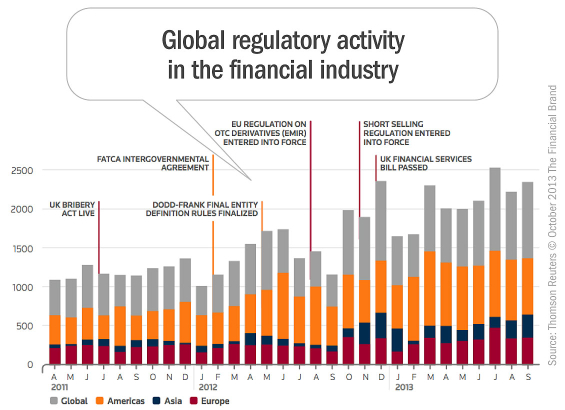 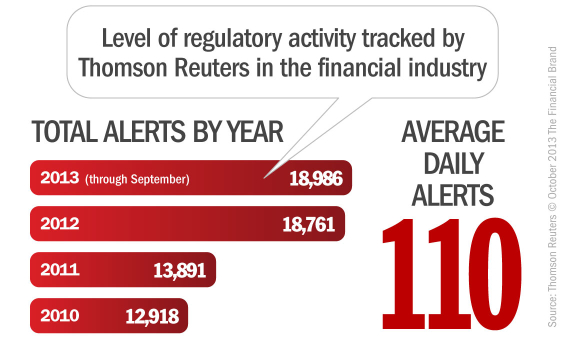 “The proliferation of regulatory activity over the past five years, and its clear implications for the financial sector in terms of managing compliance, shows no sign of receding,” noted Scott McCleskey, global head of regulatory intelligence, Financial & Risk, Thomson Reuters. “In fact it looks to be accelerating, as the number of average daily alerts has doubled since the Dodd-Frank Act.