Subscribe Now Get The Financial Brand's FREE Email Newsletter
Consumers are using fintech apps at a record pace, but many remain unaware of how they manage, store and share their information. At a time when trust is more important than ever in financial services, consumers want more transparency and control of their data. It's a challenge for banks and credit unions. They have more trust and more transparency, but are also pairing up with fintechs increasingly.

Fintech has now reached mass adoption. Nearly nine in ten consumers are using one or more fintech apps to manage a portion of their finances. And even as the pandemic impact wanes, many consumers are expected to retain their new mobile banking behaviors.

Yet while consumers generally trust fintechs with their money, they may not be fully aware of how they are using their data. There remain large gaps in awareness in how fintech apps use consumer information, according to a study by The Clearing House (TCH). One issue is that three-quarters of fintech app users didn’t read all of the terms and conditions, and many of those that did, said they didn’t understand what they read. As a result, many of these consumers have little insight into how fintechs collect and use their data.

“Consumers still have very little understanding of what data they are sharing when they use their favorite apps, which parties they are sharing it with and what those parties are allowed to do with the data,” Ben Isaacson, senior vice president of product strategy at TCH, told The Financial Brand. “Those numbers have been markedly consistent over the years despite all the growth in these companies.”

Read More: Millennials Now Trust Fintechs as Much as Banks

So that begs the question of whether it really matters that much if consumers don’t understand how their data is being used. And whether it’s simply a fintech problem. In brief: It does and it’s not.

The surging growth in fintech use also brings additional risk with it. A study by the Synopsys Cybersecurity Research Center of 107 banking apps found that 88% contained some form of a known vulnerability, compared to 63% of all app categories in general. These banking apps contained an average of 55 vulnerabilities each, something Synopsys said was quite “alarming due to the potential impact of a security breach.”

A greater issue than security is how the fintech apps use that data. While these fintechs are investing in operations and functionality, they’re “not investing in transparency,” says Isaacson. TCH conducted the poll as part of its Connected Banking Initiative and surveyed more than 2,000 financial app users and 2,000 non-financial app users. It found a significant disconnect in consumer perceptions and reality about fintech data practices.

While more than half of respondents believe the apps are only using data they have specifically approved, many are unaware of the broader agreements they have consented to. For example:

“The way it works now, a consumer could have signed up for an app five years ago, and they are still getting their data twice a day even though they haven’t used it since they signed up,” says Isaacson. “It’s amazing how much of that is still going on.”

Trust is becoming more critical than ever, especially as financial services enters the era of “Fintech 2.0,” where disparate apps and banking services will emerge from their siloes into an integrated ecosystem. As consumers increasingly use technology to manage their finances, they seek to connect their bank accounts to financial apps with a high level of connectivity and interoperability.

Trust will be critical in the great ‘re-bundling of Fintech 2.0, where all things a customer needs to manage their financial life will be integrated in one single place.

Banks may view fintechs as competition, but this new ecosystem will require collaborative trust across all institutions. Many consumers now link fintech apps, such as Zelle and Venmo, to their traditional bank accounts. And while 77% of consumers trust financial institutions with their financial information, only 63% have that same level of trust with fintech companies, according to the report by Plaid and Harris Poll.

In many cases, the banks are leading the way in cultivating trust with data, said Isaacson. He notes while apps aren’t making it easy for consumers to manage or revoke access to their data, many banks are offering more transparency with APIs. “The banks are doing a better job of allowing their customers that transparency and ability to manage than the apps,” he said. “Some of the data aggregators are just getting started down that path.”

When presented with the reality of how their data is managed and used, consumers express discomfort with fintech app data practices. Many said they would prefer to have increased disclosure from fintech apps in addition to greater control over their data. This includes a clear disclosure of what data third parties have access to, explanation of possible risks, disclosure of what access is granted by terms and conditions, and requiring explicit consent to every third party that seeks to access personal data. 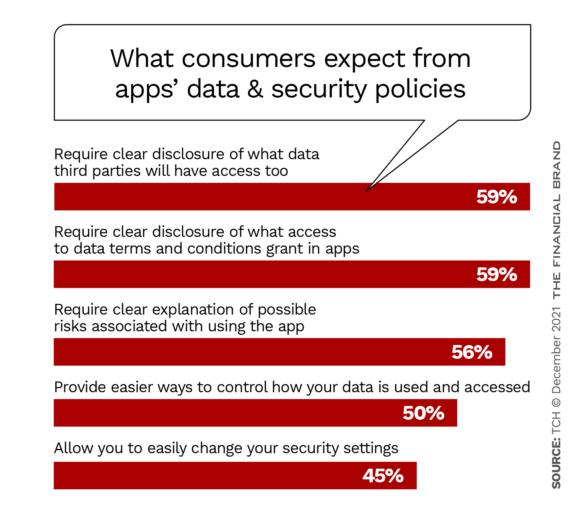 As banks and credit unions play a more significant role in the trust equation, they can also learn from the rapid growth of fintech apps. They can now rethink their digital campaigns and product strategies to double down on trust as good stewards of data.

Many consumers are rethinking how they will grant access to their data. A June 2021 study by Deloitte found that half of consumers already don’t trust online services to protect their data. More than half said they’d be willing to pay for the ability to view and potentially delete the personal data that companies collect on them. Some larger institutions, such as Wells Fargo through its Control Tower and Plaid through its Plaid Portal, are starting to offer consumers greater transparency and control of this data.

“Banks are highly-regulated whereas these companies are not,” says Isaacson. “They’re required to put all of these things into contracts, including with third-party aggregators. Consumers want more control.”