Americans are so stressed about their financial situation that one more bank fee may be all it takes to get them to switch. According to Bankrate’s national Financial Security Index, an overwhelming majority say any increase in checking fees would force them to think about moving their account. 64% of consumers would consider switching if faced with new fees.

The least loyal segment are those under 30, where a stunning 71% say they would look elsewhere. That number drops to 68% among those ages 30 to 49. Seniors are the most loyal, with slightly less than half of those 65+ saying they’d consider switching over a higher fee. 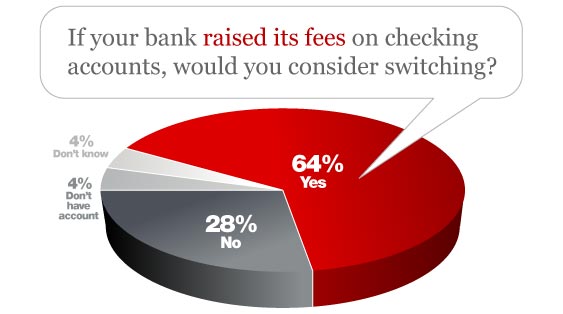 This leaves retail banks and credit unions in a pickle, since most are seriously considering a wide range of new fee options to replace lost income.

“With restrictions on overdraft fees and a proposed cap on debit card swipe fees, financial institutions need to recover that revenue elsewhere,” said Greg McBride, CFA/Senior Financial Analyst at Bankrate. “Anything that was once free is now fair game.”

Bankrate says financial institutions should think twice about the competitive pitfalls facing those who try to squeeze consumers for more.

Those 30 to 49 years of age have higher ratios of credit card debt to savings. “This might be because of a singular event — like a job loss — that depleted their savings and caused the debt to file up, or from a pattern of several years of overspending,” observes Bankrate’s Kristin Arnold.

Bankrate’s study also found that Americans are increasingly uneasy about their debt levels. One in five Americans say they are less comfortable with their debt load now than they were 12 months ago. Meanwhile, people’s sentiments about their net worth is unchanged, despite strong gains in the stock market over the last 12 months. 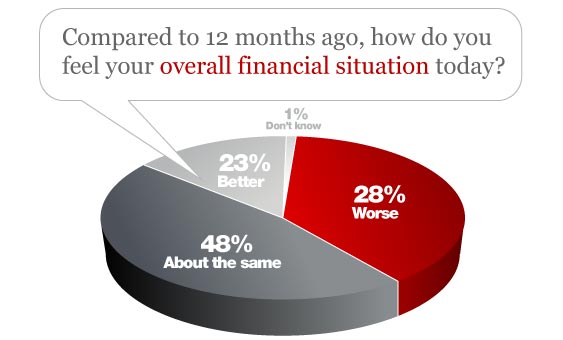 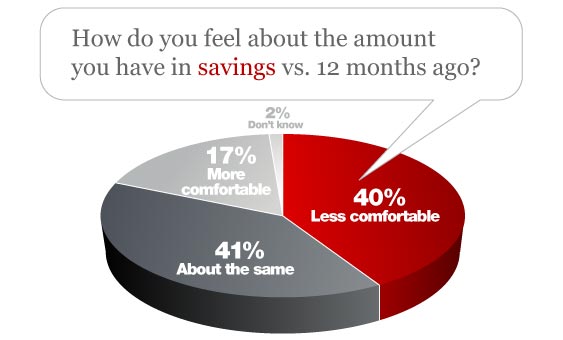 “In 2007, the market was going gangbusters and everyone had equity in their home they could tap into if they needed to use it,” observes Greg Stevens, Senior Financial Counselor at Cabot Money Management. “Equity in your home has a huge impact on how you feel about your wealth. Too many people got really comfortable tapping their home equity to pay for things like vacations, cars and boats. That is gone now. People don’t have the equity they had in their homes, and it makes everyone less comfortable.”