Subscribe Now Get The Financial Brand's FREE Email Newsletter
Consumers expect their financial institution to understand their needs and deliver personalized solutions similar to what they receive from Google, Amazon, Facebook and Apple. Unfortunately, despite advanced AI technology, most personalization expectations remain unfulfilled.

The combination of big data, advanced analytics and new digital technology is helping all industries create engagement with consumers on a level of personalization never before imagined. We are quickly moving from an eCommerce environment that once responded to customer needs to one that now anticipates needs… in real time.

In the financial services industry, one of the results of this digital transformation is a marketplace crowded with new fintech start-ups and, to a certain degree, major technology firms such as Google, Amazon, Facebook and Apple that are moving market share from legacy banking organizations. As consumers become increasingly demanding around their expectations for a more personalized digital experience, significant “personalization gaps” are appearing between what consumers want and what financial firms can deliver.

A research study from GfK shows there are ever increasing gaps between what consumers hope to receive from their bank or credit union – in terms of both level of service and financial advice – and what they actually receive. At a time when all financial services organizations are investing significant time and money in improving the digital customer experience, the research shows gaps in deliverables of between 13 to almost 40 percentage points. 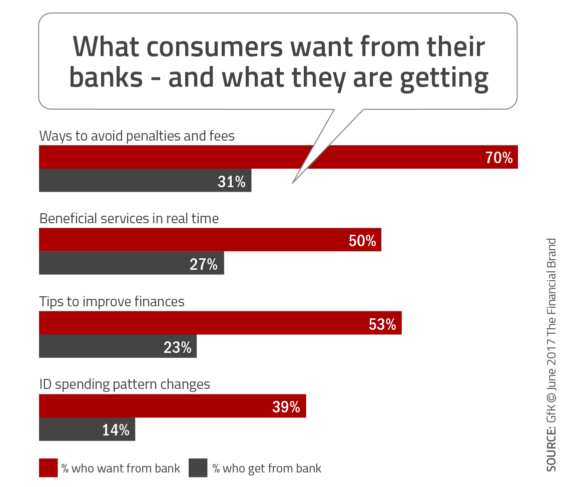 Relationship With Banking Strong… Or Is It?

Despite these gaps in deliverables, Net Promoter Scores have risen over the past two years and only 6% of consumers indicate that they will move their accounts in the next 6 months. In fact, 41% of consumers are still likely to be a promoter of their bank and 73% report being unlikely to move their relationship.

Interestingly, compared to 2015 data that was included in the Digital Banking Report, The Power of Personalization in Banking, the proportions of respondents who were likely and unlikely to switch both increased slightly, with the unsure group narrowing.

While the banking industry may feel like there is minimal impact to delivering a substandard digital experience, the handwriting on the wall suggests otherwise. The GfK research found that the strength of relationship between the consumer and banking industry has deteriorated in the past 2 years.

When asked to describe the relationship they have with their bank, the percentage that viewed their financial institution as a ‘trusted parter’ went down, while those describing their relationship as a ‘necessary utility’ actually went up. More concerning for the banking industry is that those with higher incomes were 10 points less likely to view their bank as a ‘trusted partner’ and 9 points more likely to view the relationship as a ‘necessary utility.’ 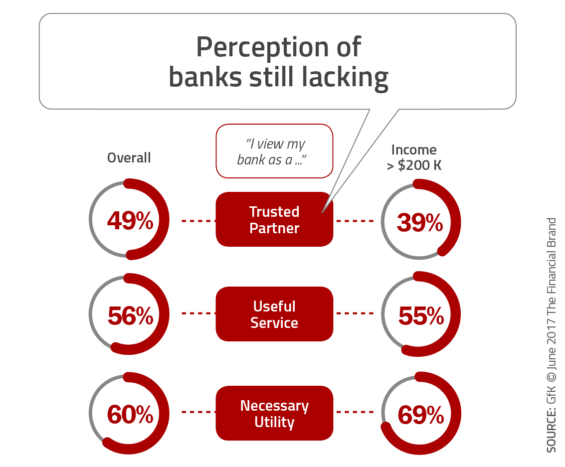 Despite the increasing acceptance of digital products, services and engagement, the GfK research found that personalized service still was appreciated. For instance, the research found that 38% of consumers were willing to pay more for a person who provides personal customer support, while only 1 in 5 were willing to give up personal service to save money (1/3 of customers earning over $200K would give up human interaction to save money).

When asked about branch banking, roughly two-thirds of consumers would only open a primary checking account at an organization that had branches. There was not an indications, however, how close a branch needed to be. That said, GfK found that almost 30% of consumers found that a good online or mobile app is more important than a helpful branch employee or call center representative. The preference was higher for younger and wealthier demographics.

The Opportunity and Challenges of AI, Chatbots

According to GfK, “Artificial intelligence (AI) applications like chatbots – which can handle basic customer service interactions online or by phone – hold the promise of filling in service gaps, given the right data and programming.” Despite this opportunity, almost two-thirds of respondents (65%) say they have never interacted with a chatbot and are not interested in doing so. Another 15% stated that they have never used a chatbot, but are interested in trying one; with 10% saying they have had a bad experience with a chatbot and 8% reporting having a good experience with one. 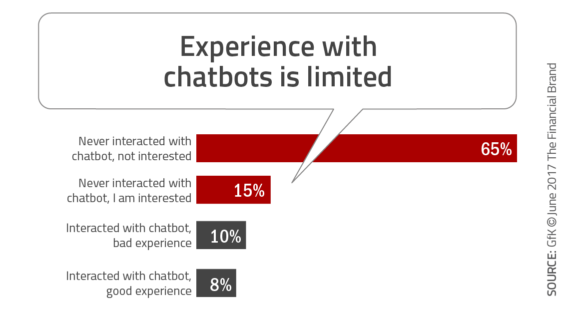 The reasons why people said they might consider using chatbots are to reduce the cost of banking and fees and to reduce human bias. As with many of the recent technological introductions, six of ten consumers surveyed say they are worried about information security in relation to chatbots, and 34% believing their financial needs are too complex to be handled by this kind of technology. Some consumers were also concerned about the speed of response.

“Banks are leaving opportunities to engage and satisfy customers on the table,” said Keith Bossey, SVP in GfK’s Financial Services practice. “Our research shows that switching banks is still viewed as a major step, both logistically and emotionally. But as major institutions ramp up their digital presence – through increasingly agile apps and other tools – the process of jumping to another bank will become much simpler. Banks that prioritize digital and mobile banking – including AI – may be in a very strong position to steal customers from those who are slower to the game.”

GfK’s study was conducted in April 2017 among 1,003 members (ages 18 and above) of KnowledgePanel®, the largest probability-based online panel that is representative of the adult US population. 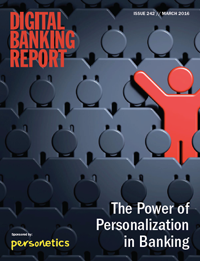 This research is similar to research done in the 65-page Digital Banking Report, The Power of Personalization in Banking, sponsored by Personetics. This report provides a very specific road map for the implementation of digital personalization initiatives and answers questions regarding what consumers value most. The report also provides in depth analysis of how prepared banks and credit unions are to deliver on the ‘personalization promise’ and the gaps that must be addressed. The good news is that consumers indicate they are willing to share information about themselves to narrow the gap.