Subscribe Now Get The Financial Brand's FREE Email Newsletter
Research reveals a lack of understanding and trust in fintech that is stalling mainstream adoption of innovative new services which could make millions of people’s daily lives simpler and more secure.
Subscribe Now!

Artificial intelligence is booming. The success of Amazon Echo and Google Home smart speakers show there is a healthy appetite for AI assistance. Autonomous, self-driving cars are in being tested by the likes of Google and Tesla. AI-powered platforms such as IBM Watson and Wipro Holmes are able to diagnose cancer, analyze retail data, and communicate through ordinary spoken and written language.

But even though AI feels like it’s going mainstream, consumers don’t yet fully trust it. A study of more than 12,000 people in 11 countries reveals that people aren’t quite ready to surrender control to silicone and microchips.

The “Trust in Technology” report published by HSBC found that consumers are apprehensive about letting chatbots and robo-advisors help them open a savings account or provide mortgage advice, despite the power of machines to analyze vast amounts of data to find the best deal.

For instance, people said they were twice as likely to trust a robot to perform heart surgery than open a bank savings account (7%) for them. Only 8% would trust a robo-advisor programmed by experts to offer mortgage advice, compared to 41% who said they would trust a mortgage broker. By comparison, 9% admitted they would be likely to use a horoscope to guide investment choices, and 10% would be likely to be influenced by the flip of a coin. 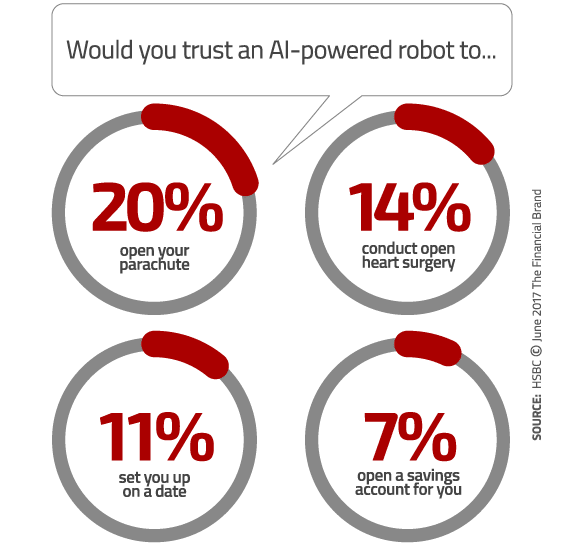 While technologies such as fingerprint recognition, voice recognition and robo-advice hold enormous potential for uses in the banking world — from security to mobile payments and investment advice — the research revealed low levels of trust in such innovations simply because consumers don’t understand them, proving yet again the old maxim that people tend to fear anything new or unfamiliar.

HSBC’s study found that a significant majority of people have never heard of new financial technologies, and even if they had, they couldn’t explain what they do.

Almost a quarter of respondents (24%) said they have not heard of- nor do they know what “voice activation” technology is, despite it being widely available in consumer smartphones.

And in the banking industry specifically, there are a number of new technologies that consumers know virtually nothing about. 59% have never heard of “blockchain” digital ledgers, and 80% don’t know what they are. 41% have never heard of “robo-advisors” that use AI-powered algorithms to offer automated advice, and 69% confess they don’t know what they might do. 14% say they still haven’t heard of “digital wallets”.

Is There a Tech Generation Gap?

But the reality is that there is little difference in habits across generations. Among all 11 countries studied, online banking is used identically by all three age groups — Millennials, Gen X, Boomers — around 67% on average. There is also roughly equal use of P2P payments such as PayPal, with roughly one in three respondents saying they use this type of service across all generations. And Millennials still use branches — 37% vs. Baby Boomers at 47%.

“This puts to bed the idea that older people are particularly nervous about technology,” HSBC wrote in their report.

All generations worry about similar events. The three age segments are similarly likely to worry about personal data being leaked (56% on average), credit card cloning (54%) and identity theft (50%).

As tempting as it may be to assume Millennials are “tech-savvy and hate branches” while at the same time dismissing Boomers as fuddy-duddies who only use the brick-and-mortar channel, doing so would be a big mistake. Broad generational stereotypes like these can get financial marketers into a lot of trouble.

Interestingly, there were some gender revelations uncovered in HSBC’s study. Men (45% vs. 38%) generally feel they are the first adopters of new technology but the research shows that they actually tend to use it less often than women. While men are the heaviest users of PCs and laptops, faxes, pagers and landlines, women are embracing wearables, apps and tablets at a faster rate than their male counterparts.

“There is one thing which — if removed — will destroy the most powerful government, the most successful business, the most thriving economy, the most influential leadership, the greatest friendship, the strongest character, the deepest love. That one thing is trust.”
— Stephen Covey, The Speed of Trust

Building trust in any new technology takes time. As HSBC points out, it requires familiarity with a product, and repeated results. As understanding grows, trust builds.

“No one buys anything unless they trust it,” HSBC wrote in its report. “Advertisers spend a fortune building trust, and designers work hard to foster it. Without trust, a technology can be ingenious and cheap, but will remain on the shelf untouched.”

And as everyone in the banking industry knows, issues of security and trust are deeply linked. HSBC speculates that security and privacy are issues of such importance that they could be preventing higher adoption rates of new technologies.

“Security is a key concern. Stories of data leaks and unauthorized data sharing are all too familiar. There can be no trust unless these worries are overcome.”

Indeed, consumers say they are more worried about their bank account getting hacked or their debit/credit card getting cloned than they are afraid of getting a serious illness or being burglarized. 87% of participants in HSBC’s study said the security of finances and their personal data were critical; the other 13% either had crummy credit scores and account balances hovering around $0, or didn’t understand the question, because everyone wants security when it comes to their money.

The good news is that more familiar concepts generate higher levels of trust. HSBC points to fingerprint technology as an example. Fingerprint identification has been used by police for more than a century, and is a familiar method of identification. Inasmuch, 46% of consumers say they are willing to trust a fingerprint to replace passwords, and 38% said they regard fingerprint login as a very important or essential service for their bank to offer. Resistance to retinal scans and voice- or gesture-based passwords is much higher however, because such technologies are far less common.

And people seem willing to concede that they will eventually come around. When asked whether AI-based services were already available or would be available in the next five years, 88% of respondents said they expected to see AI involved in nudging financial behavior, and 59% expected virtual reality bank consultations. People also believed that integration between bank accounts and social media will soon be common; 88% expect to see it arrive within five years.

HSBC says current attitudes to emerging technologies should therefore be taken with caution. Trust can be won as each technology becomes part of normal
life and develops a track record.

Tips For Rolling Out New Tech

HSBC says that consumers tend to prefer that their banking providers take a prudent approach to innovation and err on the conservative side when it comes to new technologies. There’s a view that banks are not the right organizations to experiment – 61% agree that banks should only use new technology which has been tried and tested elsewhere.

But when the time comes, financial institutions must focus on increasing knowledge and understanding of new technologies, building predictability and reassuring users about security. These are essential ingredients to establishing trust and accelerating adoption, the study says. For instance, the research showed that providing a very simple explanation of how voice recognition works, consumers’ level of “trust in biometrics” rose from 45% to 51%.

Researchers conclude that there are three key expectations among consumers with respect to a bank rolling out any new technology:

Sage advice, particularly if you think about your own behavior, preferences and experiences with new technologies.