Subscribe Now Get The Financial Brand's FREE Email Newsletter
Banks and credit unions are ramping up investments in data analytics, artificial intelligence and machine learning, but there are some problems retail financial institutions need to solve before such initiatives live up to the hype.

There’s a lot of money being spent on artificial intelligence. This year, worldwide spending on AI will reach $19.1 billion, an increase of 54.2% over the prior 12-month period. By 2021, IDC estimates that organizations will spend $52.2 billion on AI, a compound annual growth rate (CAGR) of 46.2%. Retail is the biggest spender on AI, but banking is not far behind.

Is the money worth it? Or are the hurdles and challenges just too big right now?

Banks and credit unions will need to address a number of issues before they can reap the full-scale benefits of data analytic technologies such as AI, predictive analytics and machine learning.

First, there’s the “GIGO” principle: “Garbage In, Garbage Out.” With disparate systems and siloed data, retail financial institutions still struggle with data integrity and getting to a single version of the truth.

And then there’s “Garbage In, Gospel Out,” meaning there’s a common tendency to put faith in data-driven insights that could be wildly inaccurate.

Even though AI has been around in some shape or form since the 1950s, the truth is that the tools, solutions and platforms are simply just not yet good enough for (most) financial institutions. Some big leaps forward are still necessary before banks and credit unions can just hand over the CX keys to computers and robots.

Despite all the enthusiasm for data analytics in the financial services industry, we must concede that the vast majority of banking providers are nowhere near ready to implement even a fraction of what has been touted as possible. Banks and credit unions would need to abandon many of their current systems and processes — starting with their core data platform — and that’s something most aren’t ready to do.

The reality is that there are huge shifts, big changes and major investments that still need to occur. Banks and credit unions will need to start by investing in both the people skills necessary to leverage AI, predictive analytics and machine learning. This is the first step — getting the right team and skillset in place — so that you can build your data analytics strategy in phases.

Banking providers are hoping AI will help them slash costs, improve CX, and increase profits. For instance, Mizuho Financial Group in Japan says it intends to use AI to replace about a third of its workforce with AI in less than a decade. John Cryan, former CEO of Deutsche Bank, also predicts significant layoffs thanks to AI. Those comments mirror themes in articles such as this: “One-Third of US Workers Could Be Jobless by 2030 Due to Automation“.

Such headlines make it seem as if robots are poised and plotting to steal jobs from hapless humans.

However, the reality is far from the hype, says Foteini Agrafioti, head of Royal Bank of Canada’s AI research arm.

“There are too many people making these statements [about big cost and job impacts], but the problems we have solved are very narrow,” Agrafioti explains. “There’s still a long way to go and many challenges we need to solve before a machine can operate [at a level] even near the human mind.”

“Some AI-driven ideas may seem very ‘shiny’ but in reality, they only create marginal improvements on existing data processing capabilities.”

Another industry expert throwing up caution signs is Devie Mohan, CEO at Burnmark.

“I do not see AI technologies currently adding significant competitive advantages to banks — challenger or traditional,” Mohan says. “There are very few data points of AI use cases in banks to come to a steady conclusion.”

Consumers aren’t necessarily clamoring for AI, particularly in the form of chatbots, with only 12% of respondents in a Genpact study saying they prefer chatbots over humans or other channels, even if AI-powered interactions get faster and more accurate. And 71% say they don’t want companies to use AI at all if it risk compromising their privacy. 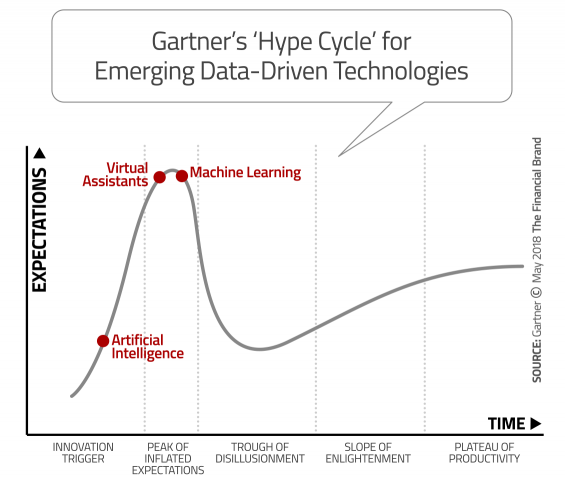 This Gartner Hype Cycle illustration shows how the buzz surrounding emerging data themes like AI and machine learning is overblown. It will take years before the banking industry realized their full potential.

Much of the promise of AI and machine learning is that programs “learn” and improve over time. But there’s also a danger in that the underlying assumptions powering algorithms can’t be easily tested in a lab environment. They usually need to be released into the wild before their creators really know how they will behave.

There have been several high-profile incidents highlighting how computers can learn and create biases that the original program never intended. Microsoft’s “Tay” landed the computer giant in hot water when Twitter trolls turned the chatbot into a ranting racist. Google had to censor image searches for “gorilla” and “chimp” because it returned photos of African-Americans. Humans still have one major advantage that algorithms don’t: common sense.

Take the case of an auto lender that included two data points in an underwriting algorithm: car mileage and the applicant’s state of residency. Seems harmless enough… except when combined, they caused the model to decline more minority applicants. Unintentional? Yes. But still against lending regulations.

According to research from Accenture, the overwhelming majority of banks and credit unions (78%) believe that automated systems like those deployed by the unwitting auto lender create significant risks such as fake data, external data manipulation and inherent bias. Nevertheless, nine in ten retail institutions feel it’s important for employees and consumers alike to understand the general principles used in AI-based decisioning. One quarter say their bank or credit union is working on providing greater transparency for all consumer-facing AI decisions within two years; 29% say they intend to be “fully transparent.”

“As AI becomes more visible within banks — as both a co-worker to employees and a customer-facing representative — there will be more scrutiny placed on how AI decisions are made,” says Peter Sidebottom, Managing Director at Accenture. “AI decisioning processes can’t be a ‘black box’. Banking providers need to adhere to and provide the same transparency as they do with any other employee to ensure regulatory compliance, and to earn customer trust.”

Even If AI Was Ready, Humans Aren’t

More than three-quarters (79%) of bankers see AI as supporting — not replacing — human workers in a human+machine collaboration. But when the robots are ready, will your employees be?

Financial institutions say that only one in four of their employees is ready to work with AI. More troubling, a paltry 3% of banking providers in an Accenture study say they have plans to significantly increase investment in re-skilling employees within the next three years.

Humans are essential to training machines to achieve what Accenture terms “responsible AI.”

“Banks’ lack of commitment to upskilling and reskilling employees to learn how to collaborate with intelligent technologies will significantly hinder their ability to deploy and benefit from them,” Accenture’s McIntyre says.

Ironically, even with the headlines claiming that one-third of Americans will lose their jobs to automation, most employees welcome AI: 67% believe it will improve their work-life balance and 57% believe it will expand their career prospects.

Westpac CIO Dave Curran makes an interesting analogy between AI and a 17-year-old. The 17-year-old may be really smart, but you’re not going to name them the CEO. At least not yet.

“AI is like hiring a 17-year-old,” says Curran. The big challenge, he says, is for banks and credit unions to hire 17-year-olds and give them time to learn. AI, it seems, needs time to learn as well.

“All financial services firms have work to do before they can even determine how best to employ intelligent tools,” says Andrew Woolf, Talent & Organization lead for Accenture’s Financial Services practice.