Subscribe Now Get The Financial Brand's FREE Email Newsletter
This annual study sheds light on how consumers perceive their financial situation, how they relate to various banking products, why they do (or don't) apply for loans, why they save, and how they feel about money.

As the US economy continues its rebound from the Great Recession, the Federal Reserve Board has been conducting an annual survey to gauge the economic well-being of consumers and their household finances.

The Survey of Household Economics and Decision-making provides new insight into Americans’ economic security, housing and living arrangements, banking and credit access, education and student loan debt, savings behavior, and retirement preparedness. 65% of consumers consider their families to be either “doing okay” or “living comfortably” financially — an increase of three percentage points

12% of those who did not submit a credit application in the past year report that they had a desire for additional credit. When asked why they did not act on their desire for credit, these consumers were closely split between thinking that their application would be denied and simply not wanting to take on more debt. 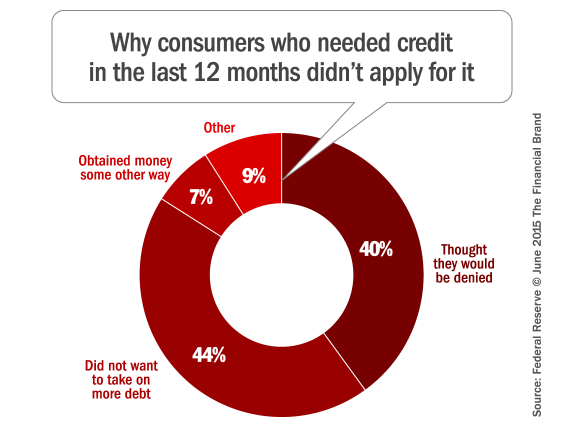 Considering the entire population — including both those who applied and did not apply for credit — 16% of consumers say that they were denied credit outright, offered less credit than they desired, or thought they would be denied so put off some or all of their credit applications. The rate of denial and/or expected denial, is highest among consumers with incomes under $40,000. Among consumers in this income group, 24% say they were denied credit, offered less credit, or thought they would be denied.

In general, consumers are reasonably confident in their ability to obtain a mortgage if they were to apply for one. Overall, 60% of consumers indicate they are either somewhat or very confident they would be approved. This is an increase in confidence from 2013, when 55% expressed this level of confidence.

Confidence in mortgage approval varies substantially by income, as only 19% of consumers with a household income under $40,000 say that they are very confident that their loan would be approved if they applied for a mortgage. This may partially reflect the income requirements for a mortgage, but it may also reflect the large fraction of low-income borrowers who report lacking good credit. Less than half of consumers making under $40,000 per year rate their credit rating as “good” or better, whereas 85% of those in the highest income group feel that they have good, very good, or excellent credit. 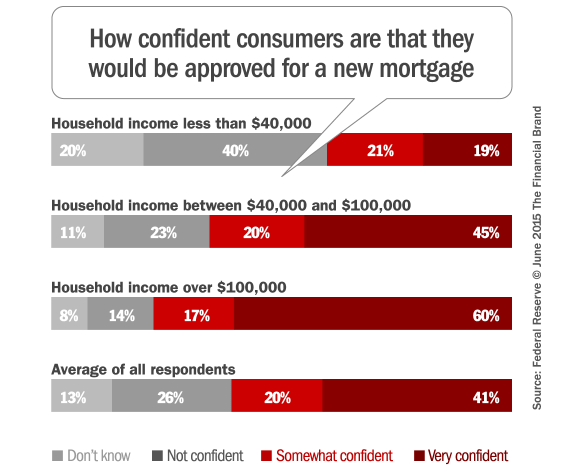 Survey results also indicate that confidence that a mortgage application will be approved is lower among blacks and Hispanics than it is for non-Hispanic whites. Among whites, 48% are very confident that they would be approved for a mortgage should they apply, relative to 25% of Hispanics and 23% of blacks.

Overall, 76% of consumers report that they have at least one credit card. A slight majority of these consumers with credit cards (56%) say that they pay their balances in full every month. Among the remaining 44% who carry a credit card balance forward, 81% report that they had been charged interest on their balance in the prior 12 months, 48% made only the minimum payment at least once, 39% carried a balance using a low-interest rate balance transfer offer, and 11% received a cash advance using their credit card.

Access to a credit card differs substantially by income. Only 60% of consumers with incomes under $40,000 per year have at least one credit card, approximately 20 percentage points lower than that seen for consumers making between $40,000 and $100,000 per year. However, among consumers with a credit card, those with incomes below $40,000 reported being just as likely as those making between $40,000 and $100,000 to pay their bills in full each month. 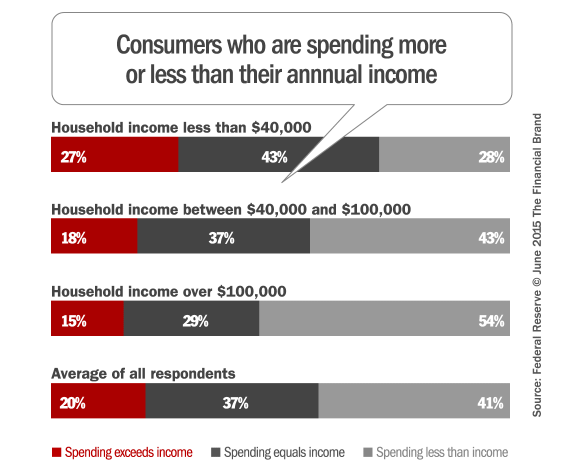 Savings Rate and Reasons for Saving

The Federal Reserve study obtains details on individuals’ savings rates by directly asking consumers what portion of their income gets set aside as savings. This question specifically asks consumers to include 401(k) savings and other retirement savings facilitated through work, thereby prompting them to consider savings more broadly than just funds diverted out of their take-home pay into a traditional savings account.

Considering this broad savings measure, 62% of consumers indicate that they saved at least a portion of their income in the past year, while 30% say that they saved nothing and 8% did not specify the amount saved. Among consumers who did save, the average savings rate was 15% and the median was 10%. 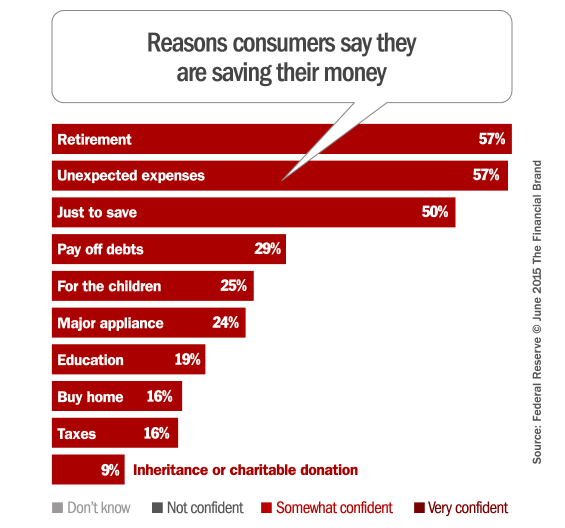 Reflecting differences in disposable resources, the likelihood of saving is closely related to one’s income. 39% of consumers with a household income under $40,000 per year saved some of their income in the past year, whereas 67% of those in the $40,000 to $100,000 income group, and 79% of those earning over $100,000 indicate that they saved a portion of their income.

The survey asks those who saved to select all of the applicable reasons for why they were saving. The top reasons for saving are for their retirement (57%), unexpected expenses (57%), and “just to save” (50%).

Based on the results of the survey, 8% of consumers are considered unbanked, as they do not have a checking, savings, or money market account. A further 12% of consumers are underbanked, defined as having a bank account but also using an alternative financial service such as a check cashing service, money order, pawn shop loan, auto title loan, paycheck advance, or payday loan. 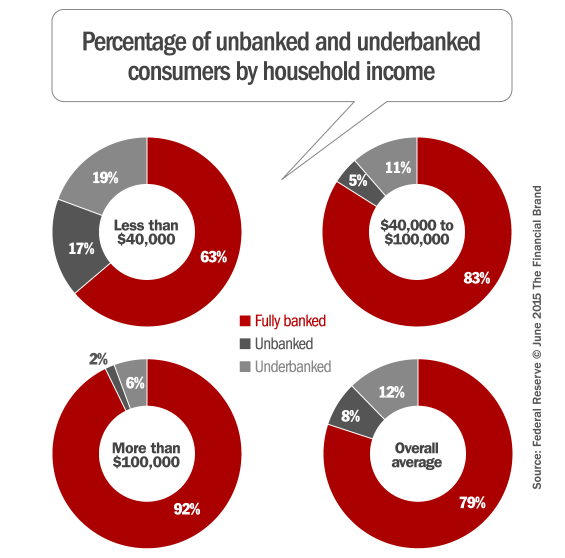 The likelihood of being unbanked or underbanked varies substantially by income, with lower-income consumers being much less likely to have a traditional banking relationship. Among consumers with incomes under $40,000 per year, 17% are unbanked and 19% are underbanked.