Subscribe Now Get The Financial Brand's FREE Email Newsletter
The banking industry has steadily improved their customer service and satisfaction scores over the last three years, but credit unions are way in the lead.
Subscribe Now!

The 2013 Temkin Experience Ratings rank the customer experience of 246 companies across 19 different industries. In the survey, 10,000 U.S. consumers evaluate three areas of customer experience: functional (can customers do what they want to do), accessible (how easy it is to work with the company), and emotional (how consumers feel about their interactions).

The banking industry has been steadily improving over the last three years, from an average Temkin Experience Rating of 62.0% in 2011 to 68.6% this year. Banks also made the largest improvement of any industry between 2012 and 2013, gaining 3.4 percentage points.

The banking industry received the fifth highest average customer experience rating, falling behind grocery chains, fast food restaurants, retailers, and parcel delivery services. Compared with 2011, banks increased their ratings by three percentage points, an improvement that was only outdone by insurance carriers and personal computer makers. Thirteen of the 16 banks improved their customer experience ratings between 2011 and 2012.

Credit unions, which are ranked third across all industries, as a group were the only bank to receive an excellent rating. Four banks earned “good” ratings: PNC, TD Bank, USAA, and ING Direct. Eight banks received “okay” ratings while three banks received “poor” ratings: Citibank, Bank of America, and HSBC.

Credit unions take first place in the banking industry for the second straight year with a rating of 79%. USAA is the topped rank bank with a rating of 78%, followed by ING Direct and TD Bank tied for third with ratings of 74%. Credit unions lead in the functional and accessible components while USAA leads in the emotional component.

The lowest-ranked bank is HSBC, earning a score of 57%. It also earned the lowest functional, accessible, and emotional ratings. The two next lowest banks are Capital One (62%) and Bank of America (63%).

PNC had the worst decline since last year, experiencing a loss of six percentage points. HSBC was the only other bank with a ratings drop since last year.

“The bottom line,” notes Bruce Temkin, principal author of the study, “is that some big banks are heading in the wrong direction.” 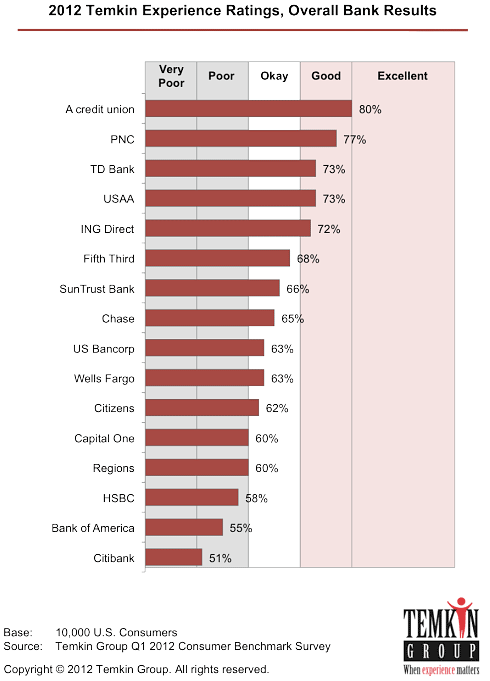 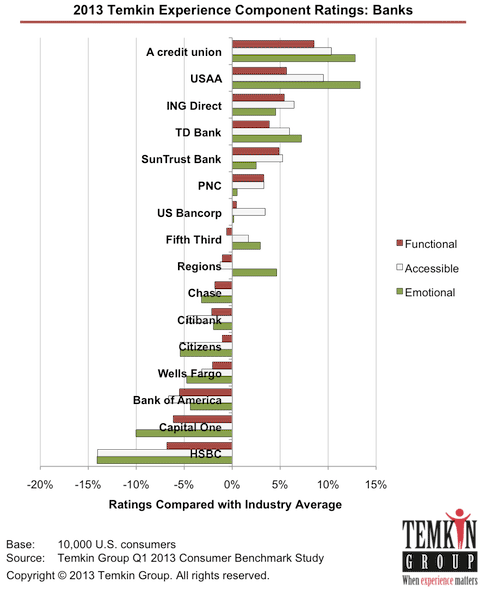 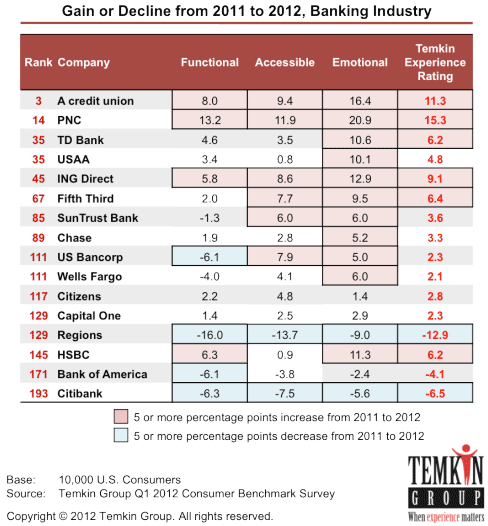 How Do Credit Card Companies Compare?

The lowest-ranked credit card company is HSBC, earning a rating of 54%. It remains in last place for the third straight year after a two point decrease between 2012 and 2013. The company also earned the lowest score for all three of the underlying components: functional, accessible, and emotional.

Capital One was the only other credit card issuer to earn a “very poor” rating, earning the next to lowest score in the industry, 59%,