U.S. consumers would be more satisfied with banks if it weren’t for all those pesky fees, according to the 2012 U.S. Retail Banking Satisfaction Study, conducted by J.D. Power & Associates.

Overall the banking industry saw a slight gain in satisfaction scores over 2011. The study, now in its seventh year, finds that overall retail banking customer satisfaction has improved a meager 0.13% since 2011. But the increase could have been more had it not for people’s irritation with fees dragging scores down.

When looking at banks by relative size, satisfaction with big banks increased slightly, while satisfaction with midsize banks was up a bit more. Big banks made improvements in reducing the number of problems consumers experienced, as well as resolving problems when they did arise. Regional banks, however, experienced a slight dip in overall satisfaction since 2011.

“Big banks continue to lag the other banks in overall satisfaction, but they have made significant improvements in reducing the number of problems customers experience and in problem resolution, specifically resolving problems on first contact,” said Michael Beird, director of banking services at J.D. Power & Associates.

Unsurprisingly, the study found consumers are 7.2% less satisfied with the fees their bank charges than they were two years ago. Consumers are most irked by monthly maintenance fees, while the negative impact from ATM fees (comparatively speaking) are much less.

“The negative reaction to fees reflects customers’ irritation about paying for something they didn’t have to pay for in the past,” said Beird. “It also reflects a lack of their complete understanding about what they’re getting for those fees.”

“Customers are not clear on what they’re getting for monthly maintenance fees, which drives the bigger drop in satisfaction with those fees,” Beird added.

There were some bright spots revealed in the research. For instance, customer satisfaction with bank branches and ATMs, as well as and hours of operation, both improved this year.

When looking at satisfied customers, J.D. Power discovered this odd gem: 76% said they are greeted by a bank employee when they enter the branch, an increase from 68% in the 2010 study.

Key Insight: Greet every customer who enters your branches with eye contact and a verbal welcome. You’ll not only be delivering great service that will boost satisfaction scores, you’ll be reducing your risk of robbery big time (it’s called SafeCatch).

J.D. Power says nearly one-fourth (16%) of consumers experimented with some form of mobile banking tool in 2012, up 6% over the year prior, but only a small segment of customers use mobile channels regularly.

“What is interesting is that only one-half of customers using mobile banking report that they fully understand the capability of the technology,” Beird noted. “This represents an opportunity for banks to educate their customers, increase usage and potentially deepen customer share of wallet.”

How Everyone Stacks Up

The study measured satisfaction among banks in 11 regions. Here’s how everyone stacked up.

California: Rabobank ranks highest in California with a score of 803, and performs particularly well in the fees and account activities factors. California Bank & Trust (783) and U.S. Bank (774) follow in the rankings.

Florida: PNC Bank ranks highest in Florida with a score of 794 and performs well in the in-person and online account activities factors. Chase (785) and Citibank (783) follow in the rankings.

Mid-Atlantic Region: With a score of 823, Northwest Savings Bank ranks highest in the region and performs well in fees and account activities. Huntington National Bank follows with a score of 801, and S&T Bank ranks third with 799.

Midwest Region: Commerce Bank ranks highest in the region with a score of 801, and performs particularly well in the fees and facilities factors. UMB Bank follows with a score of 794, and AnchorBank ranks third with 783.

New England Region: Rockland Trust Co. ranks highest in the region with a score of 811 and performs well in the product offerings and fees factors. Eastern Bank follows with a score of 791, and TD Bank ranks third with 770.

North Central Region: Independent Bank ranks highest in the region with a score of 802. Community Trust Bank and Chemical Bank follow in the rankings with scores of 794 and 793, respectively.

Northwest Region: With a score of 821, Banner Bank ranks highest in the region and performs well in facilities and account activities. Umpqua Bank (807) ranks second, followed by Columbia State Bank and Sterling Savings Bank in a tie, each with 800.

South Central Region: Arvest Bank ranks highest in the region with a score of 826 and performs particularly well in the facilities and fees factors. Hancock Bank (802) and Whitney National Bank (795) follow in the rankings.

Southeast Region: First Federal ranks highest with a score of 830, performing particularly well in the facilities and product offerings factors. First Citizens Bancshares follows in the rankings with 817, and First Citizens Bancorp ranks third with 816.

Southwest Region: Arvest Bank ranks highest in the region with 827 and performs particularly well in facilities and product offerings. MidFirst Bank (813) and FirstBank (CO) (801) follow in the rankings.

Texas: With a score of 859, Frost National Bank ranks highest in Texas and performs well across all six factors, particularly in account activities and fees. Woodforest National Bank (817) and Prosperity Bank (802) follow in the rankings. 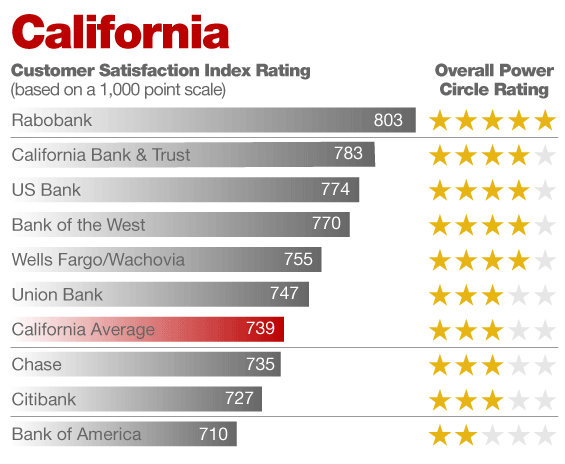 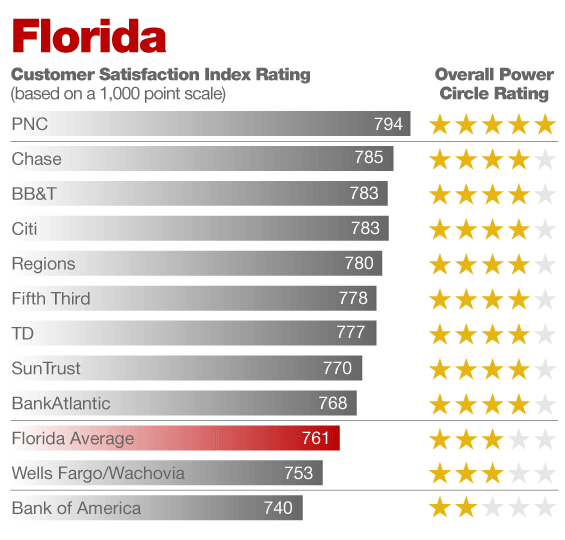 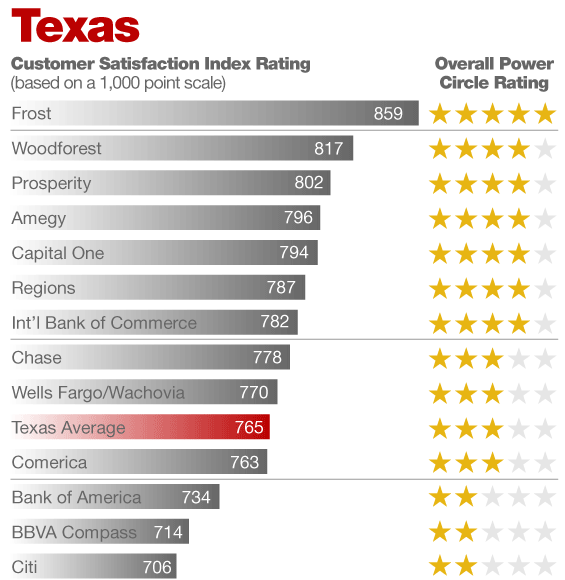 The 2012 U.S. Retail Banking Satisfaction Study is based on responses from nearly 52,000 retail banking customers regarding their experiences with their retail bank. The study was fielded in January and February 2012.