Subscribe Now Get The Financial Brand's FREE Email Newsletter
Sallie Mae learns a hard lesson in the importance of data analytics. If they had been paying attention, they could have seen all their customer experience problems coming.

By Brandon Purcell, Data Science Team Lead at Beyond the Arc

In August, Richard Cordray, head of the CFPB, announced that the agency was turning its gaze toward student loans. So it was no surprise when, earlier this week, the CFPB’s student loans ombudsman Rohit Chopra posted an article on scoring student loan servicers to the agency’s website. It may have been a surprise to Sallie Mae, however, when he called the company “the worst in borrower, school, and federal personnel satisfaction.” Although the CFPB did not announce any monetary penalty, the findings will affect the company’s bottom line since it will be allotted “the fewest new loans to service in the upcoming school year.”

And those fines may still be coming. The company itself has warned investors that it “expects the Federal Deposit Insurance Corp. to publicly accuse it of violating several federal laws regarding its private student loans. The Department of Education has said that it, too, was probing the company to ensure borrowers with taxpayer-backed loans were not harmed.”

The most frustrating aspect of this for Sallie Mae must be the fact that this should not have been a surprise. In fact, it need not have happened at all. If the company had been monitoring its customer experience to identify emerging pain points before they escalated to the CFPB, it wouldn’t be in this situation and its customers would be much happier.

Over a month ago, Beyond the Arc posted an article on its blog warning Sallie Mae that their student loans practices would draw the CFPB and other regulators’ watchful eyes. Beyond the Arc regularly mines the CFPB’s consumer complaint database to help identify customer experience pain points so banks and credit unions can take action before the CFPB does. In Sallie Mae’s case, the data showed there was clearly a problem that needed to be addressed. Here’s a brief recap of the analysis.

Read More: 10 Things Every Financial Marketer Should Know About The Student Loan Crisis

A focus on student loans

Richard Cordray did not mince words when he announced the agency’s focus on student loans last month. “It’s a big priority for us,” he said, adding that borrowers “come to our complaint line and they come by the thousands.”

Cordray openly expressed interest in this subset of the population: “Frankly, those are the people we should care about as much as anyone in our society… They are young people with some amount of promise and talent and they just lack the means.”

Given the evident importance of private student loans to the CFPB, it’s important that financial institutions understand the complaint data the agency uses when making regulatory and investigative decisions. 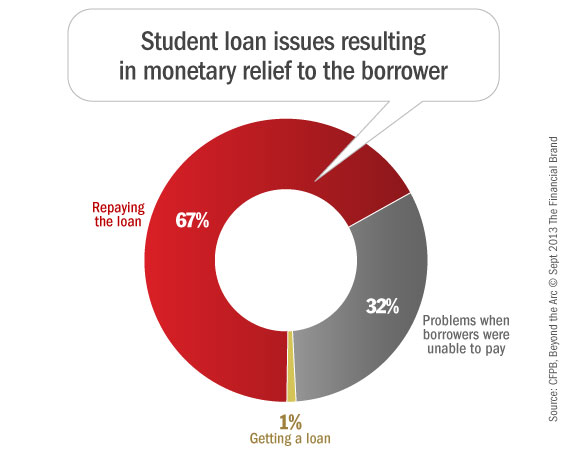 Further examination revealed that Discover is also facing the same issue, albeit on a much smaller scale. 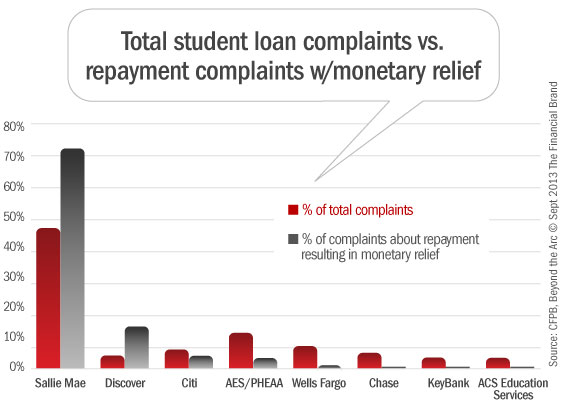 Be proactive not reactive to avoid regulatory risk

Our analysis indicated that Sallie Mae had an opportunity to improve their loan repayment process to avoid regulatory risk. As the company had access to specific complaints, they could have tried to determine the root cause of these complaints and fix the problems. They still have that opportunity, but their bottom line has already experienced a direct impact.

Other companies can learn from Sallie Mae’s example and take action well before customers lodge complaints with the CFPB. Banks and credit unions now have access to millions of customer feedback data points from multiple channels and sources. A typical bank captures not only customer profile and transactional data, but also customer emails, survey data, banker notes, escalations, and complaints. When you factor in publicly available data sources such as social media and the CFPB database, you begin to gain a very clear view of the customer experience.

The keys to avoiding the trap Sallie Mae fell into are analysis and action. Just capturing the data itself does not make it useful. You need to have established analytical and reporting processes in place in order to identify emerging pain points. Even more importantly, you must have business practices in place for taking swift and decisive action. The analytics team should be integrated with the lines of business to alert them so they can make changes. Then, the results of these changes need to be measured through continued monitoring so you can demonstrate success or improve the solution if necessary.

Brandon Purcell is the Data Science Team Lead at Beyond the Arc, a consulting firm that provides financial institutions with the strategic guidance and advanced analytics they need to grow their business.