Subscribe Now Get The Financial Brand's FREE Email Newsletter
As financial institutions try to secure loyalty from increasingly demanding consumers, there is a need to shift revenue strategies from fees to a value proposition based on personalized customer engagement.

The consumer banking experience has devolved over the last decade into a parochial relationship in which consumers are routinely punished for bad behavior. The exercise has not ended well for financial institutions or their customers.

According to FDIC data, banks are now making less money from customer account fees than at any time in the past 70 years. Moreover, a report from the Consumer Financial Protection Bureau found that the majority of debit card overdraft fees – which average about $34 — involve transactions of $24 or less and are paid back within three days. 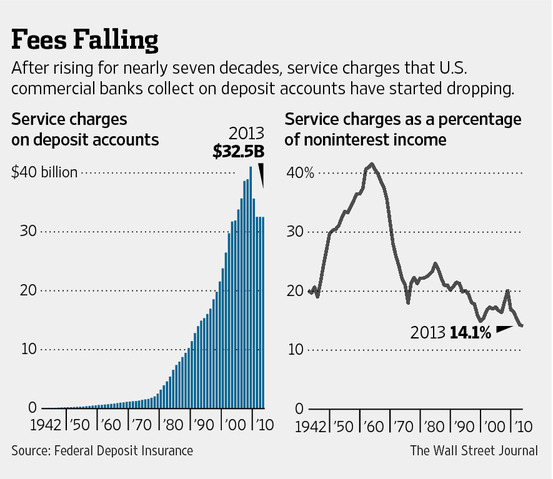 Such results not only raise practical questions about the perceived fairness and sustainability of current overdraft fee pricing, they also partly explain why trust in banks remains at a low ebb. Certainly there has been plenty of anger and frustration voiced about banks and punitive fees. Perhaps the bigger question is why aren’t banks doing more to help their customers avoid these charges in the first place?

The question is particularly apt for the highly distrusting – and underbanked – millennial generation, which has developed a deep aversion to traditional banks. So much so that a 2013 Think Finance survey found that 45% of millennials are turning to alternative financial services such as prepaid cards, check cashing services, pawnshops and payday loans.

Beyond the attrition caused by reliance on fees, across a broader customer base, financial institutions throughout the country are staring at a huge potential outflow in deposits over the next few years as the Federal Reserve gears up to start raising interest rates for the first time since 2006. One bank is forecasting outflows of as much as $100 billion next year – roughly 8% of the total deposit base – as customers shop for better returns for their cash holdings in the capital markets. Loyalty, it seems, isn’t flowing very well in either direction between financial institutions and consumers these days.

The Good Old Days Are Gone

How did the situation get so dire? Much has been made of the nostalgic old days when a local bank manager knew the majority of customers personally, judged loan risk based on the firmness of a handshake, and operated as a hub of small business activity in the area. Those days are long gone.

But in fairness, financial institutions cannot shoulder all the blame for their disappearance. Between shareholders demanding higher profits and regulators pushing for new rules, compliance and risk reduction, it’s not surprising the consumer sometimes feels lost in the shuffle. And while advances in digital and ATM-based banking have expanded service and convenience, they’ve also reduced personal contact. Yes, banking feels less personal, but it doesn’t have to be.

Moving From Penalties to Personalization

What if financial institutions could flip the trend of de-personalized service on its ear, using the considerable technological sophistication and vast data resources at their disposal to give consumers the guidance they need? What if banks and credit unions could help customers do the right thing financially, instead of punishing them with fees when they don’t?

Some pioneering financial organizations are now seeing the potential of such a strategy, thanks to new digital applications and advances in predictive analytics that make it possible for a financial institution to take what it already “knows” impersonally about an individual (from transaction data and other sources) and transforms that information into insights that are predictive, personally relevant and useful.

Here’s how it works. Consider a scenario where John, a 25 year-old associate at a small law firm in New York who does most of his banking digitally, racks up $15 in foreign ATM fees each month because he walks south on Lexington Avenue on his way to the deli for lunch. What if his bank or credit union could intervene the next time he logs in by pointing to one of its own (free) ATMs one block north of his office? Taking that logic one-step further, let’s say John gets married and his weekend beer runs become expensive weekly trips to Whole Foods. Could his financial institution be smart enough to alert John and his spouse that they are headed for an overdraft fee before they actually get one?

What would John’s relationship with his financial institution be like after a few of these positive – and personally relevant – digital interactions? What would that relationship look like after a year of such guidance? Banks and credit unions currently have both the data and digital platforms to make these kinds of positive behavioral interventions possible, and the decision support technology is readily available to make them practical.

What’s required is a much-needed shift in focus among today’s consumer banking institutions. So let’s move away from simple fee collection and punitive enforcement of the rules and toward a more proactive, benefit-driven approach to improving the customer’s financial well-being. For many institutions, the future will depend on it.

David Sosna is the CEO of Personetics, a provider of personalized customer guidance solutions for the financial services industry. Backed by Sequoia Capital, Lightspeed Venture Partners and Carmel Ventures, Personetics has offices in New York, London and Tel Aviv.